A fun and thorough look at the word "auf". We'll learn when to use it for location, what it means as a prefix and we'll talk about the common combos, like "warten auf". 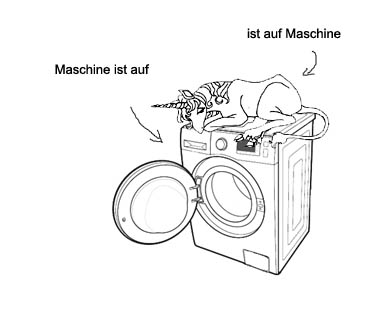 and welcome to a brand new episode of our  “German Prepositions Explained“. In this series, we’re looking those little suckers one at a time and explore what they mean as a stand alone, as a prefix and most importantly as part of those infamous FVPCTGOENs. Erm… that’s short for Fixed Verb Prefix Combos that Go on Everyone’s Nerves.
If you don’t know what that is, well, you’ll find out soon enough ;).
Today, we’ll take a detailed look at

As usual, we’ll start with a look at the preposition itself.

“Auf” as a preposition

Most if not all German learners have a pretty precise idea of what it is that prepositions do:
they suck!
They damn sure do. But they also have a quite important function in a language: they express relations between action and entities of a sentence. Take this example:

Sure, context suggests that the beer is put IN the fridge but hey, we could also put it next to the fridge. Or under it.

“Hey man, when you’re in the kitchen, could you put me another beer under the fridge? I like it flat.”

Just like my jokes.
Anyway, so each preposition carries a more or less “spatial” idea and the core idea of auf is the idea of on top. That can be super literal but auf is also used in more abstract contexts, like for instance stuff on a paper.

It’s pretty straight forward, I think and the only real difficulty are – the colors. Dun dunn dunnnn.
Well, not the colors but what they stand for. The colors are there to bring our attention to the fact that there are different cases in the example.  Der Tisch and der Preis are both masculine but in the first example we used Dative (dem) while in the second one we used Accusative (den). So auf must be one of what is commonly called two-way preposition. In a nutshell it’s like this:

Two-way prepositions can be followed by Dative OR Accusative. The case depends on what YOU want to express. Dative “marks” something as answer to “Where something is (happening)”, Accusative marks something as a destination.

That is a very crucial concept in German and we’ve talked about in detail in a separate article. So if you feel shaky about it you should really check that out (you can find it here).
Anyway, so yeah… auf is a two-way-preposition. The Dative expresses that something is on top of something and Accusative tells us that on top of something is the destination of the action.

God damn it, Meowzilla. I’m trying to explain something here. Go fix me a beer if you have nothing to do, stupid …
“Meow, meow, meow!”
Ugh…  my cat is bored and wants to move on to the prefix-auf.  But there isn’t all that much to say about the preposition so I guess, let’s do that.

“Auf” as a verb prefix

If you’ve read a few articles of my series on Separable Prefix Verbs, you’ll know that many prefixes can add two notions to a verb. One is based on “locational” idea of the preposition, the other one is a random idea German has pulled out of  “Meanings for Prefixes”-hat, just for the lulz. Well… at least it seems that way.
Auf is no exception, so it has two notions. And there are many many really useful auf-verbs built with more or less crazy interpretations of the idea of on top or upward.
Some are pretty obvious… .

For others, you need a bit of mind bending…

And for some, the idea is quite obscured…

And then, there’s this one…

Now you’re like “Wait, this is the second notion, right? The weird one.” But no, aufhören is actually still based on this upward idea. It’s all one. You’ll understand if you take Ayahuasca like Eso-Hipsters do. Or you can read my article about it. Much easier and no risk of vomiting.

Anyways, the second idea of auf, the weird one, is open-ness.
In fact, auf  is THE everyday word for open in context of stores and it’s more common than offen and there are many useful prefix verbs with it.

Now, the open-idea is pretty clear and easy to spot, I think. But I think most of you are wondering is what on earth the idea of on top has to do with an open door. Like… is there even a connection?
Well, check out these two examples.

One English speakers would associate with upward, the other clearly with open and it’s the same verb in German. So looks like it’s not just random. There is a connection. And .. ahem… a deeply rooted one. Like… literally.
Because all these words, auf, up, open, offen and also über and over come from the same dramatically ancient Indo-European root for upward.
People very early on connected the idea of upward with the idea of open. In fact, take the English verb to open up (vs. to close down) boom, both ideas combined.
I think the missing link is a notion of coming into the open. Just think of a tree growing out of the soil. Or a the chieftain standing on top of a rock.
Of course an open door doesn’t have much to do with idea of on top of. But it does have something to do with being accessible, visible.  Meh… no idea if that makes sense.
If not, don’t worry. I’m just kind of nerding out a bit with these connections.
You don’t really need them in daily life.

But you do need auf-verbs, so here’s a little overview over the most important auf-verbs with their most common translations (when there’s “…”, that means, there are some other not so common translations. )
And a link to a separate article on the verb, if we’ve talked about it in the series about prefix verbs. Because… you know… German prefix verbs are not  like “Oh, this the core idea? Well, I’ll have this meaning then.”
They’re more like “Oh this is the core idea? Great, I’ll twist and bend that till I have like a dozen meanings. ” And then there’s the r-versions and maybe the dr-versions and the related nouns. So… if you want to take a closer look at one of them, just click the link.
I categorized them by core idea, but please please please don’t take this too literal!! We’ve learned that the ideas (on top, open) are connected, so there isn’t really a sharp line between them. It’s more of a continuum.

Of course there are plenty of verbs out there that we didn’t mention here, and I am sure some will make you go like “Huh? This meaning doesn’t fit in with either of the two cores.”
If that happens, then just have some red wine.
Uhm… I mean, go to the comment section and ask. And have some red wine while doing that :).
Anyway, I hope you’ve got a rough idea, maybe even a feel for auf  as a prefix.

All that’s left now for the auf-mastery-certificate are these infamous fixed prefix verb combinations like warten auf or sich freuen auf. And speaking of those two, waiting for and looking forward to is exactly what you’ll be doing for the next few days, because we’ll talk about all that in part two.
“WHAT? Part two?!?! More like part boooooooh…..”
I know, I know, I don’t really wanna wait either (#lie).
The thing is… we’ll not just list the most common combos. We’ll actually analyze them and see if there’s an underlying theme (hint: there is). And also, we’ll take a look at common phrasings with rauf and drauf and all that would be a bit too much for today.
But okay… I’ll give you a little preview. Here are some of the most common combos…

Can you see a common theme ;)? Feel free to speculate on the comments.
And of course, if you have any questions about what we learned today or if you want to mention a few other auf-verbs or if you want to try out some examples, or if you just want to troll, just leave me a comment.
I hope you liked it, have a great week and see you next time.

Ready for part two? Then here you go…