Word of the Day – “sondern”

"sondern" and "aber" are both translations for "but". Today, we'll learn, what idea "sondern" expresses and what the difference is to "aber". 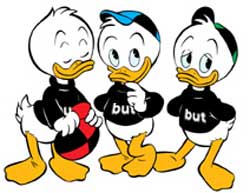 and welcome to our German Word of the Day. This time we will look at the meaning of:

or as I like to call it: the second one of the three but–lings.
The three but-lings are the three German words but translates to. The other two but-lings are aber and außer and even though they all translate to but, they stand for a different concepts.
Ausser is easy to explain – it’s the German word for except. And aber is kind of the default, normal but.
The one that’s really tricky is sondern and that’s what we’ll tackle today.
Yes, I know it’s Mercury retrograde again. But I don’t really believe in Chemistry, so this shouldn’t affe… wait… Mercury doesn’t refer to the element, does it?
Off, great now, I’m already confused. Damn you, retro-Merc!
Anyway, let’s jump right in.
And let’s start with the word but itself. It originally was a combination of by and out and it’s essence is expressing a  contrast or contradiction between two parts.

As we can see in the version with and, the context already makes us feel some sort of a contradiction between the two pieces. I shouldn’t be watching the Witcher if I am tired. In fact, I shouldn’t be watching it at all, because it’s cheap and I feel weirdly attracted to Henry Cavi… erm… anyway, so there’s an implied contradiction or contrast, but the but in the second sentence really solidifies it.
And how does that help us with sondern?
Well, sondern expresses a specific kind of contrast or contradiction – we could call it “exclusive“.
In the first example we had, the two parts are in contradiction, and yet they coexist. I am tired AND I am watching the Witcher (regardless).
That’s different in the following example:

Of course, I can technically watch both shows, I could even watch them at the same time. But the way we phrased it, we’re “excluding” one option in favor of the other.
And that’s exactly what sondern is used for.

Or in a more general way…

In English, you sometimes have to add rather or instead in order to convey this “exclusivity”. In German, that’s built in with sondern. And that makes sense, too. You see, sondern is related to besonders (special, especially), sonderbar (strange) and the English asunder and even though these words seem very different on the surface, there’s a common underlying theme:
separation.
And that’s pretty much what sondern does. It sets the two options apart and pits them against each other.
Let’s look at some more examples.

Now you might be like:
“Wait a second, Emanuel… that last one is not really the same. We’re having BOTH options here. A and B. How does that fit it there?”
That’s a very good question. The basic structure is this:

not only A but also B

And this will ALWAYS be done with sondern.
But if we look at it like the options are only A vs A AND B then it fits right in with what we had before.
Yeah, I know it’s a little forced maybe. If you want you can also look at it as a separate structure.
Cool… so basically, we need to use sondern whenever our basic structure is one of the two:

But what happens if we actually mess up and use an aber? Why can it be so confusing to native speakers?
Well, let’s look at Henry Cavill agai… I mean let’s look at the example with the Witcher again…. that’s what I meant.

This is what we already know. The Witcher loses in favour of the Mandalorian.
Now, let’s replace sondern with aber.

This sounds a bit odd, but the message is something like this:

We’re still preferring the Mandalorian over the Witcher but now, we don’t focus on the contradiction, but rather on what they have in common… they’re both TV shows I might watch.
So the opposing option here is actually s “not watching anything”.

Let’s do another example…

Can you tell the difference :)?
In the first one, sondern puts my sister in direct opposition to my brother. A bit like this, though  not as dramatic:

The version with aber on the other hand kind of puts brother and sister on the same side. A fitting translation would be this:

Can you feel how there’s a notion of “so it’s okay” in the air? It’s really hard to say where it comes from, but my sister and my brother having the book are kind of on the same side of the coin and the implied opposite option is that neither of them has it. So you can see that aber and sondern clearly have a very different subtext and perspective. And why it can be so confusing to a German native speaker if you mix them up.

Now, English as well as the Romantic languages don’t use distinct words and I can imagine that it’s takes a while to wrap your head around it and develop a feeling for this contradiction that sondern expresses.
But it’ll come over time.
And until you have that feeling, just check if you can add a rather or instead to the but that you want to translate.

And speaking of translating… to wrap this up here is a little but-laden text. Can you tell them all correctdetermine the correct but-lings?

Today I woke up pretty late but I still felt very tired. So I decided not to
get up but to stay in bed a little longer. But then my phone rang. I tried to
ignore it but it wouldn’t stop. So I got up but it turned out that it wasn’t
anything important but just some stupid opinion poll. So I took my
chance to bitch at the people a bit. I told them not only how puzzling it
was that they had my number but also how daring it was to call at 1 pm
in the morning. I waited for a response but the guy had nothing to say
but “Sorry sir, good day sir.”

What’s that you’re saying? The last one was unfair because we didn’t talk about it?
Well, that’s called a cliffhanger. Just like in  The Witcher. If you want to keep watch… I mean learning, just follow the link below.
So, this was our Word of the Day sondern. If you have questions or suggestions just drop me a comment. I hope you liked it and see you next time.