The meanings of “klappen”

"klappen" is a really, really common word in colloquial German. And so is the noun "die Klappe". Today, we'll learn what they mean and how to use them. 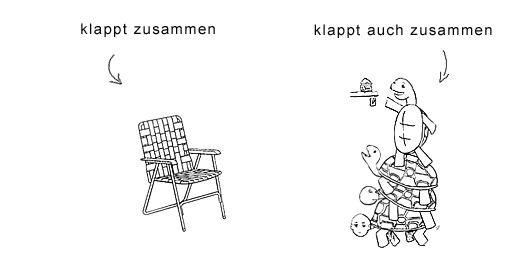 You might not have heard of it yet, because courses and books often miss out on it for some reason (the reason is that they suck). But I can guarantee you that once you know it, you’ll hear it everywhere. And it’s an absolute must have if you want to speak idiomatic German.

Some of you have probably notice that klappen looks a fair bit like to clap. And indeed, the two are related.

They’re what experts call an onomatopoeia, an attempt to capture a sound in speech. And the sound klappen and clap are trying to capture is the sounds of two swans gracefully swimming by. Or in completely other words: two objects hitting each other.
The example that comes to mind immediately is clapping hands, but that’s actually NOT klappen – it’s klatschen.

Maybe the German version is more about imitating the sound a group applauding, which does sound a little wet. Or maybe Germans just have sweaty hands… I don’t really know.
Anyway, the verb klappen itself slowly evolved, from the mere imitation of a sound, toward what might lead up to the sound. And that’s why many prefix versions are today used in the context of folding. I mean, not folding laundry, of course. A robust, solid folding. Like…   “moving” things that are solid and have a hinge or something like that.
The best example is probably a book

And just like you can zuklappen (close) the book, you can also aufklappen (open) it, even though that doesn’t really make a sound, because the focus of the verb has shifted toward that idea of moving at a hinge, folding. And the various prefixes tell us how exactly we “fold” it.

Little side note… German also has the verb falten, the direct relative to to fold.  And that covers the “soft” instances of folding, pretty much. Like a blanket or paper. Those are just too soft to klappen. Unless you’re Chuck Norris, of course. He can fold a blanket so hard that it makes a clapping sound.
“Emanuel, it’s 2020. Chuck Norris jokes are not funny anymore.”
Oh whatever… first of all, Chuck Norris doesn’t age, he just improves, and so do his jokes. And second of all, I don’t see any alternative on the horizon. The Rock is a soft kitten compared to Chuck.

Anyway, back to topic. So a lot of the prefix versions of klappen are about a sort of folding, and there are also quite a few nouns have to do with a hinge and folding. Like Klappstuhl (fold-able chair),  Klappfenster (crank open window) or  Klapphandy (iFold… coming soon) .
And there is also a stand alone noun… die Klappe. It can appear in quite a range of contexts but it is usually basically flat thing on a hinge that closes something.

Klappe is also the word for the slate the use in movie sets.

“Klappe, die x-ste”. This is like THE film business phrase. Everyone knows it and they really do say that on set… maybe because it has the nice side effect of covertly yet directly telling everyone to shut up. How so? Well… one of the most common uses of Klappe is as a colloquial, slightly rough word for mouth.

It’s not as aggressive as Fresse or Maul and with  friends it’s totally fine, but with your boss… not really. Unless your boss is your friend, of course. Then it’s okay. Or if you’re your own boss, and you want to tell your brain to be quiet you coul… anyway, I digress.

Now, the examples we’ve seen so far were actually all nouns and prefix versions.
But what makes klappen the must have that it is, is the meaning it has by itself.

And by itself, klappen is a colloquial way to express the of to work out. In sense of to go well, to be okay, to function.
Here’s a couple of examples.

And this usage actually isn’t very old. It evolved during the time of the industrial revolution when workers started associating a clacking sound with the idea of some mechanical part falling into place, something that fits.
Think of a modern car door. There’s big money being payed to design a discreet, comforting, reassuring, bold, adventurous, kid friendly, independent, vintage, modern, sexy but not too sexy, pleasant but not dull, kick ass clacking sound that lets you know the door is closed. The sound of a mechanical part properly latching into place… gives us a sense of satisfaction.
But even though it’s not that old, this “new” klappen is used A LOOOOOT and in various contexts.

It would be wrong, though, to say it’s a translation for to work (out).
Because in one (grammatical) aspect, klappen is actually more narrow.

In these two example, what works is a noun. Pasta and a napkin get the job done. And klappen wouldn’t work in these examples. Why not?
Well, we can go all back to the very origin. Klappen is the result of a process. There needs to be activity for klappen. And that’s why klappen only works if we’re talking about an activity.
Meeting at 6, eating healthier, fixing the computer, trying something… all these things can klappen. But actual things like napkins or a pasta don’t.

Klappt’s and hat’s geklappt are really super common combinations, by the way, and I’m sure you’ll hear them a lot. The ‘s is just a shortened es that refers to what’s being tried.
And another very common combination is klappen mit.

Here, mit connects the “tool” and we can nicely see again, that things themselves don’t klappen. The removing the stain with salt is what klappt.

Here, the mit connects the “goal”… in this case Captain Context would fill us in that it was “having a relationship with Maria”. Here are two more examples

All right.
So this is the meaning that makes klappen so incredibly useful and trust me… it is everywhere. It’s not particularly high German but it isn’t slang either and you can definitely find it in print, too.
And to wrap this up, here’s a nice common klappen-pun.

Always a good laugh at the weekly meeting if nothing goes according to plan :)
So… this was our German word of the Day “klappen”.
As always, if you want to check how much you remember, you can try to take the little quiz I have prepared. Which won’t klappen, of course, because the quiz isn’t finished yet and I haven’t put it here. But it’ll come.
And of course, if have any questions or suggestions or if you want to try out some examples of your own just leave me a comment.
I hope you liked it and see you next time.