The meaning of “die Eile”

A fun look at die Eile, how to say "hurry up" in German and the surprising origin of the words. 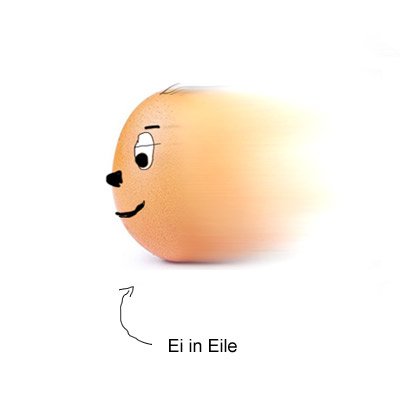 and welcome to our German Word of the Day.
And this is the perfect episode if you don’t have much time but you still want to learn some German because today, we’ll take a look at the meaning of

And not only will it be a super quick look. It’s also right on topic, because Eile is the German word for hurry.

Now, if I  asked you if those two words were related you’d probably be like “Nah, they look too different.”. And you’d be right, because they’re not.
The English relatives that Eile does have, however… well… they look even more unrelatederer.

There’s ambition and itinerary and preterite and ion and coitus. And bunch of other words from the spelling-bee pool that all come from Latin and look boring. Well, except coitus. I know that one because it’s still on my bucket list…. I… I mean, was.
Anyway, as unlikely as it seems, all these words do come from one and the same origin – the savagely ancient Indo-European root *ei- and the meaning of that root was simply… to go. Same root as where the Slavic verbs for to go come from, like the Russian идти (idti), for example.
If you’re into etymology, it could be kind of fun to look up all the various words that came from it and explore the connection between the idea of going and their actual meaning. I’ll leave a link to Etymonline.com below, if you want to geek out a little.

But for the German die Eile, we actually don’t need any mind yoga, for once. Die Eile is the noun for the verb eilen, and eilen more or less means … to go fast. So basically what you do when you’re in a hurry.
Tadah.
Now, eilen is still around actually, but it’s a little outdated and you can mostly find it in fixed phrases.

The noun die Eile on the other hand is really really common… especially in a world like ours that seems to get faster every day.  #boomertears

As you can see, just like you’re in a hurry you can be in Eile in German. But just as common is the phrase “es eilig haben”, which literally means “to have it hurrily”… like… maybe think of it as “I have things in state of hurry.”

And then, for things like projects, you can also find Eile haben (having hurry).
But that is mostly used in the negative version.

Cool.
So now we know how to say that we’re in a hurry.
What we don’t know yet is the verb to hurry. Like … how to tell an intern to HURRY UP WITH THE FREAKING COFFEE for instance. Seriously, where’s the Flat White I ordered before the show?! What am I even paying you for?
“Uh.. you’re not paying us!”
I know. It was a rhetorical question.
Seriously though, big pinky-swear that we’ll talk about payment once 2020 is over but I really need this flat white now.
Anyway, where were we… oh yeah, the German verb for to hurry.
So we already had the verb eilen, but as I said, that’s more about rushing to a place and it’s kind of rare these days.
The standard verb for to hurry is … drumroll…  sich beeilen. Looks a bit like a typo but it really is eei because it’s basically the be-verb of die Eile. So literally, it means to put hurry onto. Or more precisely to inflict hurry onto oneself, because the self reference HAS TO BE THERE. Even if you’re in a hurry. Haha.
So where in English you’d just say “hurry!”, in German you have to say “hurry oneself“. Maybe think of it as pressuring yourself – that might make the self reference feel more natural.
Let’s look at some examples.

Oh and pay attention to the pronunciation…. there is a pause between the be- and following eil-. Many people kind of join the syllables but that’s hard to understand actually. If you can’t make the pause, that’s really something worth working on. Be… silence… eilen. And the be doesn’t even have to be all that proper. Maybe a bit like the pause the British do when they say Bri’ain, just without the r.
Anyway, sich beeilen is so common, that Germans actually made a the noun die Beeilung from it, which is basically another way to say hurry up!.

And there are a few other Eil-words like Eilmeldung (breaking news), Eilauftrag or the quite handy word voreilig, which is about rushing something a little too much.

And to wrap this up, here’s a little proverb that reminds us that hurrying is not always the good way to go.

And that’s it for tod..
“Here man, you’re Flat White.”
It’s “your” not “you’re“, you just said that wrong. And also the show is low key over… but thanks, I guess.
*takes sip
Ahh… it’s good coffee, well done!
So yeah, this was our quick look at the meaning of die Eile and beeilen. As usual, if you want to see how much you remember, you can take the quick little quiz my interns will have prepared. Hopefully.
And of course, if you have any questions or suggestions, just leave me a comment.
I hope you liked it and see you next time.

die Eile = the hurry
sich beeilen = to hurry up
eilen = to rush (to a place, NOT for rushing work, kind of out of date)
voreilig = “over-hasted”, premature (you rush something a little too much, not for premature in an accidental sense)
Eile mit Weile = haste makes waste (Proverb)
Beeilung = the hurrying up (often used to say “Hurry up!”)