The meaning of “übrigens”

We'll learn how to use "übrigens" and why it's the German translation for "by the way". 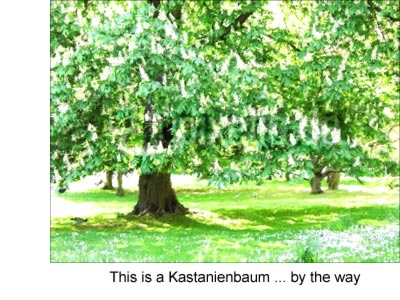 I hope you are doing great.
I am a little tired today and all I did so far was doing groceries and go for a walk.
So basically, I did a “2020” today :).
Seriously though, spring is slowly coming here, and I have to say that Berlin is really a nice place to be in spring. Many people say it’s dirty and blah blah blah, but maaan… this city is LUSH.
There are trees and bushes and high grass and just “in between green” everywhere. And right now everything is blooming. Cherry-trees and lilac and chestnut  which is Kastanie in German. Those are one of my Lieblingsbäume.
But yeah, so all I did today was buy things, eat things and go for a walk enjoying the budding green by the way… or is it along the way?
Hey, speaking of by the way… do you know how to say that in German? No? Well, it’s the word…

So, the German word for by the way is übrigens. And while it’s pretty clear why by the way has the meaning it has, the German übrigens sounds a bit like someone took a normal word and put it in a blender. So basically, it’s how someone who doesn’t speak German would imitate how German sounds.
But of course, übrigens is not random at all.

The meaning of “übrig”

The  core piece of it is the word über which is the German version for over, above. And the other important building block is the common German ending –ig  which turns a word into an adjective,  just like the English –y…

As you can see here, the unstressed “e” of the noun got mumbled away over time, and that’s exactly what happened to the old überig. The e got “smaller and smaller” until there wasn’t anything left of it.
And that actually brings us right over to the meaning of übrig, because übrig is about something being left over.
Which makes sense, if we think of leftovers as “over, above what was needed”. Like… if you have an oversupply of Nachos with salsa,  some nachos will be left over. No salsa, though. I virtually drink that stuff.
But yeah, übrig is about the idea of leftovers and it’s fairly common in daily life, particularly in the combination with the verbs haben, bleiben or lassen.

There are also a couple of pretty common figurative phrasings with übrig.
übrig haben für expresses the idea of having (no) interest in something, and jemandem übrig bleiben is about (no) options remaining for someone.

And like most other adjectives, übrig can also be used as an acting noun with the sense of the rest

Oh and while we’re at it, we should also mention  im Übrigen. Taken literally, it’s something like “within what’s remaining” and it’s a good alternative for außerdem (besides), in a sense of giving additional information.

Now, if you’re wondering why it’s übrigen… well it’s the “nounified” version of übrig in Dative case, so -en just the normal adjective ending.
And from there,  übrigens is only one “s” away.

The meaning of “übrigens”

And this “s” at the end of übrigens  is not some weird random “s”. No, the s is there because übrigens is a Genitive case. Or used to be, at least, when it was invented.
You see, nowadays, the Genitive isn’t all that popular but back a few hundred years ago, Germans loved it and they used it for all kinds of things. And we inherited quite a few words from that period, one group of them being those adverbs that end with s.  Like spätestens for example.  It means at the latest and the original notion was of the latest… a Genitive. It doesn’t “feel” like a Genitive to native speakers anymore, but that’s where the s comes from. And it’s the same system for frühestens (no earlier than),  mindestens (at least), höchstens (at most), wenigstens (at least) and schnellstens (the fastest possible).And of course übrigens, which literally once meant “of what’s left“. And I think that makes PERFECT sense as by the way.
You have a main train of thoughts, a main story, and then you have other stuff… stuff that’s left once you’re done with the main story. Stuff that’s “by the way”. You can also think of it as “in other news” if that makes more sense.

As you can see in these examples, übrigens can be used just like by the way. So it can kind of introduce a sentence without really being part of it.
But while by the way is pretty much always this tag-on phrase, übrigens can be a proper part of the sentence. So it can come at different positions and it can take up position one, meaning that the verb will follow.

The only place that DOESN’T work well for übrigens is the very end. For by the way, it’s natural, but übrigens would sound a bit out of place there.
Not wrong, but definitely like you forgot to say it.
Cool.
And I think that’s actually all for today. This was our little look at übrig and übrigens and they’re definitely both words you should add to your active vocabulary.
As always, if you have any questions or suggestion just leave me a comment, and of course any random, by-the-way side thought is welcome as well.
I hope you enjoyed it and see you next time.