Word of the Day – “schaffen”

A thorough look at the meaning of "schaffen", its various important uses in everyday German and a bunch of really cool related words. 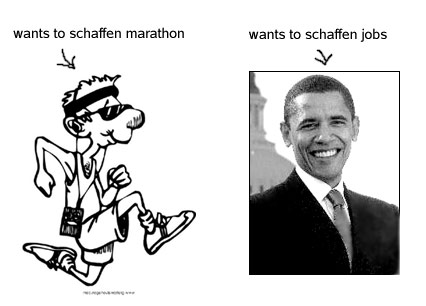 Schaffen is a really important part of everyday German and yet for some reason is hasn’t really been on my radar until recently when a bar flirt asked me what it meant. It was then that I was thinking… hmmm that could be worth a Word of the Day.
So I said “Sorry bar flirt, but I must go. My readers need me.” and I went home to start my research.
As usual, I started with the origin and I found the absolutely ancient Indo-European root *skā̌b(h) which was about the idea of cleaving with a sharp thing – or more specifically to carve wood.
So I looked for English relatives when I suddenly got a text message from an unknown number “Hey Mr. Teacher man, you didn’t pay for your drinks. I guess you owe me now ;).”
Being used to girls chasing me, I kept my reply short: “Send nudes.”
Nah, kidding. My actual reply was more along the lines of
“Heeeey, nice to hear from you :):). I’m just looking for relatives to German schaffen and you won’t believe what I found.”
Because the English branch of that root is actually pretty impressive…

Ship, shove, scoop, shift and shed – they all come from this basic root that was about cleaving, carving. But the one that’s REALLY helpful is shape.
Because one of the two main meanings of schaffen is to create. Which is kind of “giving shape“.

This meaning of schaffen is pretty old already and it is still around today.
It does sound a bit epic though, so it doesn’t fit for small quick everday day  creations. You don’t really schaffen a recipe for pasta sauce, for example.
Still, schaffen is SUPER common in daily life and you absolutely need it. And that’s because of the second meaning it has taken on.

the most common meaning of “schaffen”

I just mentioned that the creation-schaffen isn’t that common anymore.
Well, back a few centuries Germans actually LOVED the word and so they used it all kinds of things they “made happen”… “I created my homework” or “I created cleaning my room”  or “I created calling you”.
They did that so much, that the word eventually took this notion of successfully doing as a second meaning. And that’s why schaffen today is a translation for to succeed, to pull off and  to manage.
And it is REALLY common in daily life…

Now, if we look really closely at these examples we can see that they actually all have the same structure. We have a zu-construction AND we have an es in there..

This is kind of the “standard” construction with schaffen and you need to start using that (and yes, the es needs to be there).
But it’s not the ONLY possible phrasing.
You can also use the verb with a pronoun or noun directly. Just keep in mind that it has to be an ACTIVITY you’re talking about.

And then, there’s a couple of uses that might seem a little weird at first.
One is in context of time where schaffen can translate to to make.

But the more important one is the context of food, where schaffen actually implies “eating completely”.

So… as you can see, schaffen is really used in a wide variety of situations and I used many different ways to translate it.
If we had to pick just one, I think to manage will work okay in most contexts. But the two kind of have a different vibe.
Schaffen has a notion of work to it… like.. real effort has been made. I mean, it originally meant to create, right?
And to manage  just lacks this notion… at least in my mind it does. It just sounds a little bit too cool, too controlled. It still might be the best translation in a situation, I just wanted point out that the vibe is different.
Cool.
Now, before we get to the less important meanings of schaffen (yes, there are more) let’s go over a few really common phrases that are kind of fixed.

And last but not least, there is this exclamation:

And that’s… actually… wait a minute. I just remembered something really important. Do you recall that example with that composer from the beginning… let me pull it up again, here it is:

Since you’re mostly going to use the successfully-do-schaffen, you won’t to worry about that too much. Geschafft is what you’ll need most of the time. But if you ever come across geschaffen, you’ll know that it means to create.
All right.
Now, I promised a few other meanings of schaffen so here we go. Hooray. More meanings!! Just what we need … *cries silently

The Side Hustles of “schaffen”

Schaffen has some side meanings. None of them is used THAT often but you can find them in daily talk.
I’ll leave it up to you to decide whether or not they do connect to the meanings of schaffen you already know but I will give you a literal translation to trigger your imagination :).
The first side meaning of schaffen one is to bring or to put things with a weight, size or number somewhere…

What’s up with this size, weight or number bit? Well, remember this notion of work, effort that the succeed-schaffen has? It’s the same here. You wouldn’t use schaffen as to bring if what you do is bringing your plate over to the sink. At least I wouldn’t.
But then agian, I usually just leave my plates on the kitchen table and wait for my girlfriend to do it. I don’t have one though, so there’s a lot of plates there. Man… maybe the bar flirt… I wonder what she replied. But no, I must stay focused and finish the article first…
So yeah, the next side meaning of schaffen is to work.

This meaning is somewhat limited to the south of Germany but there is one expression that can be heard anywhere, although I don’t like it that much…

You can say it to your colleagues at work as you, the part-time walk out the door :).
And then, schaffen can also be used in the sense of exhaust or tire. Which is kind of to finish, just with a twist.

Fortunately, there are not that many prefixes that work.
First up, we have erschaffen, which is an even more epic sounding version of the create-schaffen.

The next word is the word abschaffen, which means to dispose of something or to repeal… depending on the context. It doesn’t mean that you throw something away… it just means that you got rid of it.

By the way, this is the exact wording of the respective text in the German constitution.
And then, there’s kind of opposite of abschaffen: anschaffen.
But anschaffen actually has two meanings.
Now, here are three options – which one do you think is NOT a meaning of anschaffen:

Of course, the answer is to bring on :).
What?… oh no no no, that wasn’t a joke … anschaffen really DOES mean to prostitute oneself. I have no idea why.
Anschaffen in sense of to buy is usually used for somewhat bigger purchases that will be with you for a while… like a car or a dish-washer. Don’t use it for food.

As for the other anschaffen… mostly people would combine that with gehen or sein…. that way it is less likely to be confused with the normal meaning.

Now, that’s still not all there is. But I am a bit geschafft and I think we’ve done enough for today so I’ll just link the words to the dictionary… yeah, soooo lazy :)

Wait… the last one doesn’t probably belong in that list, but I can’t put my finger on why not.

So…  I am really sorry it got soooo long again but this word was impossible to cover with less.
Alright… this was our German Word of the Day schaffen. It comes from to create but it has evolved into to successfully do and a bunch of other things which all share kind of the idea of work being done. And if you think of this as the abstract core of schaffen, you will certainly have no problem to see the connection of any of the following words to schaffen :)

and last but not least

If you see anything else with schaf or schäf in it, there is a good chance to guess it with all you’ve learned today in mind.
If you have any questions or suggestions just leave me a comment.
I hope you liked it and see you next time.

Test yourself on “schaffen”