We'll talk about all the verbs that take "auf" as a preposition and we'll see if there's some logic somewhere. Also: a few really common phrases with "drauf" 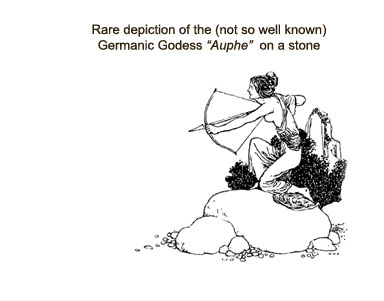 Wow, that was weird.
In the first part, we learned that the core meaning is the idea of on top, upward and that for the prefix it also means open. And we learned that auf, offen, up,open and über are all related because the old Indo-Europeans were quite into plant medicines. Well, okay that’s not the real reason, but it sure seems that way something.
Anyways, if you haven’t read the article yet you can find it here. You don’t really need it to understand what we’ll do today, but it’s fun. Kind of.

The article ended with a list of some of the most common fixed PVCs. Which is short for Fixed Prefix Verb Combos and man… those fPVCs can really pull the fPVC out from under us.
Ugh… chemistry jokes. They just never get a reaction.
Anyway, today we’ll take a look at all these verbs that just come with auffor no apparent reason and see if there’s a common theme to them. We’ll also check which case to use and learn something about fixed PVCs and cases in general and to wrap it all up, we’ll also look at some really cool everyday phrasings with auf’s brother drauf.
So are you ready to jump in? Perfect…

The most well known verbs that just have to come with auf are probably warten auf and freuen auf. But it’s another one that’s most iconic for the group… zielen auf.
Yup, to target.
In fact, that’s pretty much the embodiment of the core idea of these verbs – the idea

“targeting, having an eye on”

Or in one image… 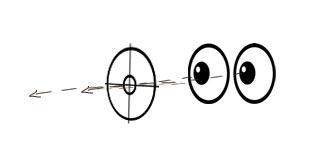 But this isn’t really all that helpful until you see it in action. So let’s go over a bunch.

First up, there’s the group of course verbs that directly involve taking aim. Werfen aufand schießen auf are the most common examples but basically any verb that is about delivering a projectile do connect the target using auf.

Also zeigen (to point at) and similar verbs like deuten aufand hinweisen auf can pretty much be added to this group. Sure, they’re not about delivering a projectile but pointing is really close to aiming at, I think.

Capers special?! What the hell is wrong with supermarkets these days? Anyway, that would be the perfect moment for the very common colloquial phrase scheißen auf. I mean, come on. Literally, it means “taking a dump onto” but it ‘s basically the German way to not give a shit.
So… yeah, basically not giving a shit in German is giving shit. Languages are so confusing.

Cool.
So far, there wasn’t really any mind bending involved, I think. But it can stay that simple, can it?!
Let’s see if the next group is a bit harder.

Waiting, preparing for something, looking forward… what do they have in common? Well, they’re about events in the future, right? So we can say they’re about anticipating. And from anticipating it’s really not that far to the idea of having an eye on.
Which brings us right to the next couple of verbs: achten auf and aufpassen auf. Those two are both about paying attention to so they’re also about having your eyes set on something. What’s the difference between the two?
Well, achten auf sounds a bit “grander” than aufpassen. Like… it sounds a bit more official, it’s more long term and it works better for abstract stuff. Aufpassen aufis more like actively watching something at a given time.

Still, no insane mind yoga needed.
The third tranche of verbs is a little different. Behold…

Wow, now that’s a REALLY wild mix of meaning. What all these have in common is that they’re based on words that talk about location, namely kommen and stehen. And so it’s very likely that the auf they are using is a locational auf. Like…

That is probably how they evolved, so we’re technically having a second core for auf-verbs. But me, personally, I like my preposition-verb-combinations to be like my body.
“Uhm… average?!?!”
NO!!! I mean with one strong, well defined core. Rrrrrrrrr… dem’ abs. Ripple ripple. They’re there, I swear. Just like the connection of those verbs to our core of targeting. You look hard enough :)

Don’t get me wrong though. I’m not saying you have to remember these connections. If they don’t work for you that’s fine. All I’m trying to do is give you a bit of a “feel” for auf. You won’t be able to just guess correctly which verbs will go with auf. That takes way longer than conversational fluency. What I’m trying to do is make you feel a little less confused, give you a feeling that things are not just super random but that there’s some sense behind it and you are able to find it.
In fact, let’s give it a little try.

Your turn to mind bend

Here are three more super common verbs that go with auf. And I challenge you – is your mind bending strong enough to find a connection to our core idea of targeting, eyes on :).

Take a minute to think and then we’ll go over them together. I’m gonna make me a coffee in the meantime
…
(*makes coffee)
…
All right. So the first one, antworten auf it’s pretty clear, I think. Your answering is targeting the question.

The second one, verzichten auf, we need to make a little twist. It is basically the “super-opposite” of having your eyes on something. Like… you make an effort to take and keep your eyes off of something, even though you might actually want it.

Last but not least we have sich verlassen auf and this one is probably the hardest one of them all. My thinking was that you have your eyes on someone in a way of expecting them to do something. But yeah… this is kind of forced. We could also think of it in a local sense. Like… you leave something of you on/with someone else. But also that is very abstract. Good thing is… it’s rely ON in English, so aufis the direct translation.

Cool.
Now, I think we already have a pretty good handle on these auf-verbs but there’s one question that we haven’t addressed at all. Or have we ;). The question which case to use. And why.

Which case to use

And the answer lies in the colors I used in all the example.
“But wait, you only used one color. Blue.”
Precisely.
Because all the verbs we’ve looked go with the same case – accusative.
Like… I can’t think of one abstract combo that would go with the Dative. And if we were to use Dative with any of the verbs above, it would sound like we’re trying to indicate a location.

Now, this is actually a general trend we can find for all abstract preposition-verb-combos but for aufit’s also a trend that makes a lot of sense because this notion of targeting that we’ve found as common theme of these verb combos with auf ties in perfectly with the idea of destination, that the accusativeexpresses in “normal” prepositional uses.
Cool.
So this was our look at the infamous abstract verb preposition combinations for auf. Of course, we didn’t mention all of them (I’ll add a more comprehensive list at the end of the article). But we did look at the most important ones and I really hope you got a bit of an idea of the “feel” of auf.
Now, before we wrap this up, let’s take a quick look at auf’sbrother drauf.
“But Emanuel, we’re tired.”
I know. But there are two REALLY useful everyday expressions. And it’s gonna be a good recap too.

Of course, drauf can do the normal da-word job for all the verbs we’ve learned today. So it can serve as a replacement for the part that is “auf X” if you don’t want to repeat things. Or if stupid German sentence construction calls for it.

A couple of phrasings, however, use drauf as a fixed component.
The first one is drauf sein.
Taken literally, drauf sein means “to be on it”. And it is used that way.

But drauf sein is also a fixed expression used to talk about people’s mood or character traits.

The other phrasing is drauf haben. The literal meaning would be “to have it on something” but that isn’t all that common. Like… the only example I can think of right now is food.

What makes drauf haben so useful is the fact that it’s used to express the idea of knowing really well, having great skill. Basically… toppings you have on your skilloccino. Oh boy, I’m getting silly… let’s look at some examples real quick and then wrap this up….

And that’s it for today. We made it. Hoooray!
This was the second part of our look at the word auf and if you feel like your head is about to burst… don’t worry. You don’t have to remember everything. Just let the dust settle and you’ll see that the important parts are still there.
As always, if you have any questions about what we did today, or if you want to add something, or if you’d like to try out some examples, just leave me a comment. Ich freu mich drauf :).
I hope you liked it and see you next time.