Dabei is not only a common da-word, it's part of some really cool and useful phrasings like "dabei haben" or "dabei sein". Today, we'll find out all about it. 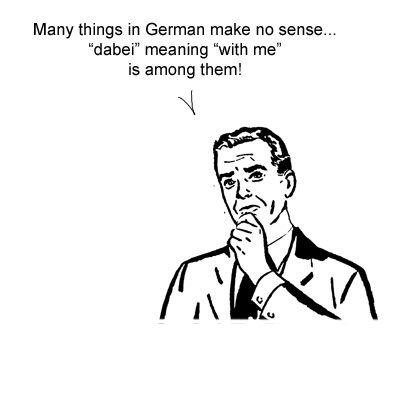 and welcome to your German Word of the Day, this time with a look at the meaning of one of those infamous da-words.

We’ve already talked about the da-words in general but some of them merit a closer look because they’ve taken on functions and meanings that don’t seem to fit the general explanation and because they’re part of a bazillion super-common phrasings. Dabei is one of those so we’re in for loads of idiomatic examples. If you want to sound like a native speaker dabei will definitely help you with that ;).
So let’s dive right in….

Oh, one thing before we start… you’ll get much more out of it if you already know your da-words. So if you need to brush up on that, here’s the link:

All right. And now let’s start.

the meaning of “bei”

Bei is a preposition. Preposition?! More like Crapositions. Boom.
They really are a pain in the butt because they’re essentially like Thomas on Tinder – they just never match. Each language uses different prepositions for different contexts and you can’t really say preposition A in one language translates to preposition B in the other. Sometimes it does, but more often it doesn’t. Let’s take for, for example… yes, it can mean für. But also a bunch of other things:

Ugh, learning prepositions really sucks!
And it’s kind of similar with bei, though not as bad.
It is clearly the other brother of the English by, but the two have a somewhat different core.
So what’s the core of bei? We could call it “proximity”; or in normal terms, bei expresses the idea of

“being with or at something or someone”

In practice, bei is THE word you need to express that you’re with a person.

And it’s also used in context of being “at” some sort of event or activity.

Here, the activities were packed as a noun, but we can also express them using a sentence with a verb.And then we’d use dabei to refer back to that sentence.

So here we’ve essentially combined the “at something” of bei with the standard “normal” function of da-words as we’ve learned in the general post.
And with this in mind we shouldn’t have a problem understanding the super common phrasings with dabei.

Do you have an idea what it could mean?
Exactly, dabei sein means to be with something, at something, part of something. It can be used in the sense of an item being among a set of other items.

But the more important use is in the context of people being present at or part of some activity – be it as … uhm, a bystander, or an active part of the uhm, action.

Here, the focus was on some sort of event. But it’s also used in contexts of you doing something right that moment.

So looks like dabei sein is actually an option to express the English progressive tense in German.
Anyway, dabei sein is super-mega-common and definitely something to have with you when you venture out to where there are native speakers of German.
Hey, speaking of having with you… that brings us right to the next super common phrasing.

I don’t think this needs much explanation. Dabei haben means that someone has something with them. What’s the dadoing here exactly? Well, I guess we could see it as pointing to whatever we’re doing, but don’t think about it too hard. You know, sometimes German doesn’t actually make much sense… what? Oh, you found that out already? Oh, uhm… how’d you find out this well kept secret ;)?
Anyway, examples.

In spoken German people tend to actually skip the da- so essentially we end up with the verb beihaben. I don’t know how widespread that is, though. Maybe it’s limited to the Berlin area of the North so if there are any native speakers reading this, let me know.

Cool. Now there are a few additional common phrasings that use dabei but with what we’ve learned so far you can understand those from context when you see them.
Let’s instead now turn to the dabei that has some extra-meaning baggage.

Let’s start with an example.

Hmmm… yeah, right.
So what is this? This dabeiexpresses some form of a contradiction, here. But dabei is not as straight forward as obwohl. With obwohl we have a clear connection between the parts. With dabei it’s more like we’re saying something and then we’re throwing out the contradictory part as an aside while not making the statement. Like…

“Hey, A is the case. Curious, considering that K was the case before.”

It’s really hard to put into words, so I hope I am making sense.
How did the dabei end up with this? Well, we do give some sort of add-on information in the dabei-part so the only “new” thing is this notion of contradiction. And that kind of comes automatically in certain statements.

This is the standard dabei, the one that is about being “at” some activity. And the contradiction is already there through context. So it doesn’t take much for dabei to take up the mantle here.

Quick word about the grammar: this dabei can ONLY be at position 1 of a sentence and directly after it comes the verb.

Only in the first one, the dabei has this vibe of contradiction. And we actually kind of need the eigentlich in support because not every position 1 dabei is automatically contradictory. In the second sentence the contradiction is ONLY expressed by eigentlich while the dabei sounds 100% standard “while doing that”.
But hey, let’s not get bogged down by details. Let’s look at a couple of examples instead.

You don’t need to use this dabei actively, but you definitely should be aware that it can express contradiction at times.

All right. So we’re pretty much done with dabei but there’s one more p… oh there’s a call here, hold on…. German is Easy, I’m Emanuel you’re on the air.
“Hi, this is Kellyanne from Washington.”
Hi, what can I do for you?
“I just wanted to mention that you forgot one use of dabei.”
Oh really. Which one?
“It’s also the name of a country in the Middle East.”
Wait, what? Ohhh… you mean the Emirate Dubai?
“Yeah, Dabei.”
Ah, haha… no it’s called Dubai in German.
“Well, Sir, it’s Dabei. It’s an alternative spelling and you probably don’t know this because the textbooks don’t cover it. Worst phone call yet click”
Hello? Hello Kellyanne? She hung up on me. Weird.
Anyway, where were we… uh yeah… so there’s one more thing before we wrap up: dabei’s less determined sister.

The meaning of “wobei”

So, the standard use of wobei would be a nice sounding version for the question “at what?” (I’ll add a link to my article on wo-words below, if you want to know more)

But just like dabei, wobei has a side usage that is about contradiction. Or let’s say second thoughts, that’s the better description.
It’s only used in spoken German and it is not even part of a sentence. Like… you’d say something, then you’d pause, then you say wobeiand then you say something that kind of contradicts the first thing you said to an extent.
You’ll often see an eigentlich in the second part to support the contradiction.

Just like with the contradiction-dabei, this is nothing you HAVE to use. But it’s one of those idiomatic bits that’ll really make you sound super native, so why not give it a try.

And that’s it for today. Phew, how on earth did that end up being so long :D.
As always, if you have any questions or suggestions, or if you try out some dabei-sentences just leave me a comment and we’ll talk about it.
Hope you enjoyed this, have a great week and whatever you do… I hope you have fun dabei ;).
Bis nächste Woche.