A fun look at the meaning of schade and how to use it like a German. Also: some interesting family members and relations to English. And some Schadenfreude :) 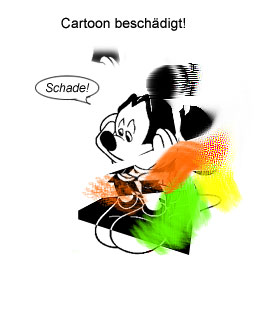 and welcome to our German Word of the Day. This time, we’ll take a look at

A really really cool word which might actually be the key to intuitively knowing the gender of like ANY German noun right when you see it.
And it’s also a great word to express disappointment.
Hmmm… I feel like I know where this is going.
But let’s jump right in and find out…

Let’s start our little tour with the noun der Schaden. The origin is the “not as ancient as Indo-European roots but still pretty ancient” Germanic root *skath-which was about the idea of hurting, damaging and which also pretty reveals the English side of the family… to scathe. But while scathe is pretty rare nowadays and only seen as unscathed (unharmed) , the noun der Schaden is the German word for a damage or defect.
Here is is as a stand alone…

And here are a couple of common compounds…

And of course we have to mention the word that has made it into all “Top X Non-translatable German Words English should import”-lists ever.
Literally, it means harm-joy, damage-joy and it is the joy you experience about someone else’s misery. Sounds really awful, but I think everyone is guilty of it. Even Jesus!!
Like… I remember that one time, when Mattheus fell off the mule right after calling Jesus a Hippie. Jesus kept snickering the whole day. Anyway, examples…

Cool.
So this is the noun der Schaden. And that’s exactly what schade was in the beginning… this noun. Well, without the n.
One way people would use it back then was to express that something sucks. Just like in English we say

And by the way, French does the exact same they. There you say

That last one is an excerpt from a short story I’m working on, by the way.
It’s called 5000 Schades of Grey.
Hmmm…. no one is laughing…. schade!
Anyways, as you can see, it’s really useful and the exact translation varies depending on context. And that’s not all. There are also a couple of fixed phrasings. The first one is schade um (etwas sein) and it means that something is lost in some way and that that loss is a pity.

And then there is zu schade sein, which expresses that something is too good to be lost or wasted.

Ugh… unicorns. It’s really schade that they’re so stuck up.
Anyway, so this is the word schade and even if you’re still a fledgling and you can barely make sentences, you can at least use schade as a one word exclamation. It’ll make you sound much more native speaker like.
Cool.
Now of course there are a few other useful related words, so let’s take a look at those real quick before we wrap up.
They’re all pretty easy to guess though, I think. The idea of damage is super clear and you don’t need much mind yoga.

And then there are the two verbs schaden and beschädigen. They’re both about doing damage but they’re not synonyms.
Beschädigenis more momentary, if that makes sense. It’s about doing damage to an object at a point in time. It’s not limited to tangible things, but it doesn’t work for living beings. Oh, and it only talks about a partial damage. For damaging completely, the word is kaputtmachen.
Schaden on the other hand is more long term and a bit vague. And it works for in context of living beings.

Actually, there’s a third version, the verb schädigen, which is somewhere in the middle between the two but we’ll just do what the unicorn does with the forest cleaning schedule… ignore it :).
And that’s it for today. This was our look at schade and… what?… I forgot something? …. oohhhhh, the trick for guessing the noun gender. Oh well, that was of course nonsense. There is no such trick. But at least you now know what to say in a moment like this …
“You’re an idiot, Emanuel.”
Uh, that’s not what I meant.
As usual, if you have any questions or suggestions about schade or any of the other words, just leave me a comment.
I hope you liked it and see you next time.