A fun look at the meaning of the umlaut-monster die Mühe and the effort you have to make to say making an effort in German. Also: a really dumb pun with cows. 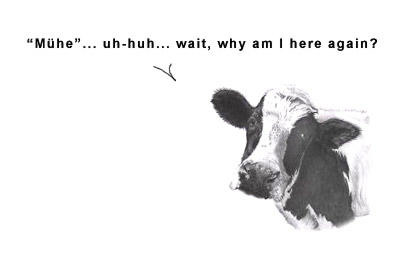 and welcome to our German Word of the Day. I hope you’re all well and energized because today we’ll take a thorough look at the meaning of

Mühe is a bit of a weird word. Like… if your boss gives you a new task, he’s probably gonna be like “Give yourself Mühe.” You, still new to German, do as your told but then two days later when you walk up to him and say “Hey boss, just wanted to let you know that I really have a LOT of Mühe with that task.”, he’ll furrow his eye brows and be all like skeptical and displeased. And you’re just thinking to yourself  “So, I’m supposed to give it to myself, but I’m not supposed to have it?! Yeah right.”
What sounds like some sort of riddle is due to the fact that depending on the phrasing Mühe can mean effort as well as trouble or even toil. And these are actually closely connected. Just imagine… it’s a snowy day, you snuggle in on the sofa with a lot of blankets ready to watch your favorite show. As the opener is running you discover that you forgot your beer or wine or hot chocolate in the kitchen. Damn. You’d really like the drink but you’d have to unsnuggle, get up and walk aaaaaaall the way to the kitchen to get it. Quite an effort and also kind of a toil. They’re really just two sides of the same coin. And that coin is Mühe.
Mühe is related to müde (tired)  and they’re both related to a quite surprising word: molecule. The origin is the ancient-ish Indo-European root *mo- which meant to exert oneself. Now, one occasion where you have to exert yourself is if your confronted with a load to carry. And that’s where molecule came. The idea of mass. So… the root first was the effort and then also the reason why the effort was necessary, the obstacle to overcome, the mass to move, the trouble to deal with. These two ideas are the DNA of Mühe and depending on the phrasing or the expression, the focus can be on either.
The noun Mühe  itself is very much about the trouble-aspect. It sounds negative and draining.

In all these, Mühe stresses the hassle. And that focus is even there if the translation is actually effort.

At least to me, Mühe sounds much more like toil, hassle than the more proactive effort. Mühe just has this straining vibe to it. The sound of the word kind of captures it, actually. Müüüüüüüühe... like, the sound you make when you’re trying to lift a very heavy stone. Or yourself off the couch after binge watching your favorite show.  So… even if it means effort, Mühe  sounds more tiring, less energetic and kind of negative.
Mostly, that is, because there are two expressions, where Mühe sounds rather positive.
The first one is this sich Mühe geben. This is super uber common. Literally, it means to give oneself trouble and the closest translation is probably to take pains but it’s also used as to make an effort and to do one’s best.

The other phrasing is sich bemühen. If you know the be-prefix then you’ll know that this means as much as to inflict trouble on oneself. And so it is essentially the same as sich Mühe geben. Just a bit more technical, formal sounding.

So… in these two phrasings, sich bemühen and sich Mühe geben,  Mühe really sounds like an effort. In all others pretty much it sounds much like hassle, toil, strain. And that’s why the following two sentences, as similar as they may seem to you, have a completely different vibe to a native speaker and mean two quite different things.

The first one is  telling a person that there’s no need to go out of their way, no need for some extra effort. Like… your friend tells you about his computer problems and you offer that you could ask the nerd at work, but later your friend sends you an e-mail saying that you needn’t bother because he’s just going to buy a new laptop. The second one on the other hand is basically an invitation to do a sloppy, lazy ass job.
And speaking of lazy… I think we’ll just wrap up here. Enough German for today :). But seriously, there isn’t much more to say. That was our look at the  die Mühe. It’s a combination of the idea of problems and the effort you need to make to deal with that. It usually sounds like trouble and toil, stuff we’d rather avoid but in some phrasings it is positive and desirable effort. And that’s why your boss wants  you to “give yourself Mühe” but he doesn’t really like seeing you having lots of Mühe with a task.
As always, if you have any questions or suggestions or if you want to try out some examples just leave me a comment. I hope you liked it and I wish you an awesome week. One thing that is super awesome is to gain a deep, enlightening insight about life and the nature of things. And so I’ll leave you with one of THE wisest, insightfullest, mind blowingest sayings the German language has to offer…