A fun look at the meaning of the German words "die Art" and "die Kunst" and why only the second one actually means art. 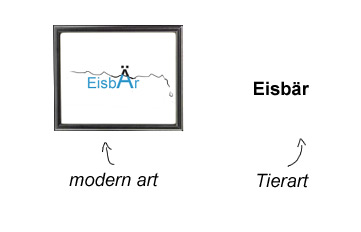 and welcome to a new episode of False Friends Explained. As usual, we’ll take a pair of false friends, see what went wrong with their friendship and then, in an epic, tear-ridden finale we’ll reconcile them.
Meh… okay, I guess we can’t make them friends again. But it’s definitely gonna be super epic because today, we’ll look art, old and contemporary, English and German. Ladies and gentlemen, get ready for

A famous man once said

A poem, a fart,
everything is art.

In English, this statement is controversial. In German not so much.

In German, everything has some Art to it because the core idea of die Art is “how something is/is done“. The real translation highly depends on context and there are many option like way, type, kind, manner… oh and species.

And of course if we talk about Art, we have to mention artig as well. As a standalone, it’s a slightly out of date option for well behaved. What makes it really useful is that you can add it to nouns to create a word with the meaning “like that noun”.

And let’s also not forget eigenartig which literally of its own kind, unique but which has shifted has shifted toward strange.

Whether the balloon dog of Jeff Koons is art is not for us to decide (#irony). What’s sure, though, is that at least the name Koons sounds like art, the German word for art, that is.. die Kunst.

And this word comes from a very famous verb: können. The verb that describes ability. And that makes sense. I mean, creating a piece of art does need inspiration but just look at Michelangelo or Goethe or Debussy… there’s always a lot of skill involved.
And thing you can do well was the original idea of die Kunst. This sense is still visible in words like Schmiedekunst (the profession of smithery) or Braukunst (art of brewing) and it’s also the bridge to the other big idea of the Kunst-family today: the idea of being man-made as opposed to natural. or in one word, artifical.

There’s a whole lot of Kunst-compounds like Kunstfaser (artificial fibre), Kunstrasen (artificial lawn) but the best one of them is Kunststoff which means plastic, synthetic material. Kind of cool name actually, “artificial stuff”.
Anyway, so we’ve seen that die Kunst and art do line up perfectly while die Art doesn’t mean art at all. That leaves us wondering… who screwed up?

When you know Spanish or French or another Romance language, you’ll know that the art-words also exist there and that they roughly have the same meaning as in English. That’s because it comes from Latin. Back then, it was still about the idea of general skill, piece of work so the evolution is exactly like the one of die Kunst. That’s why you can make a Bachelor of Arts in economy.
Now, from the thing that is made to how a thing is made it’s not THAT far. German has pulled way crazier stunts. So we could assume that German, and a few other Germanic languages like Swedish or Dutch for that matter, just imported it and messed up the meaning at some point.
But in this case, it actually wouldn’t be fair to blame German. Why not? Because the origin of German Art is not entirely certain.

The thing is… about 1000 years ago, there was a word art but that was about the idea of “tilling the field” and it belonged to a completely different family than English art. A few hundred years later, this art had shifted toward the idea of “area where you live, home” and even more general “where you belong”. And from that meaning it’s really not too far to meanings like species and type and the general idea of “how something is“, that the word has today (and has had for a few hundred years). The reason why this is unclear is that there isn’t enough source material for etymologists to make a definite statement but what’s pretty sure is that it’s not just a standard scholar import from Latin that got twisted.
German does have words however that are directly related to English art. The word der Artikel for example. And artikulieren (articulate). And Arm.
Now you’re like “Whaaaaat? What do these have in common?”.

Well, the whole art family goes back to the super ancient European Root ar- and this root was about the simple idea of joining things. Think about it. An Artikel brings together words and ideas, artikulieren is about joining sounds, an Arm is made up of three joined parts. And art… well, we’ve already learned that it originally was about skill and pieces of work. Making a chair or a boat or a house… it’s always kind of about bringing things together, joining things. And now listen to this:
We already mentioned the Bachelor of Art, right? What’s the other big type of bachelor? Exactly, science.
We learned that art comes from joining. Now guess, where science comes from?
From separating, dissecting, shedding – same family as shit.
Ohhhhhhhhh…
drops mic
….
…
…
…
*picks mic back up
Yeah… so… uh… that’s it for today :). This was our look at the pair art and die Art. English art means die Kunst, German die Art means type, way, species, kind and it’s definitely a word you should add to your active vocabulary.
As always, if you have any questions or suggestions about

die Art – the way/type, species, kind, the manner (in which something is done)
artig – well behaved (rare)
X-artig – X-like
eigenartig – strange
abartig – disgusting
ausarten – get out of hand (for parties or meetings or the like)
die Unart – bad manner/bad habit