A fun look at the meanings of "ganz", its super common use as intensifier, a really random twist. And my toilet paper situation #notgood 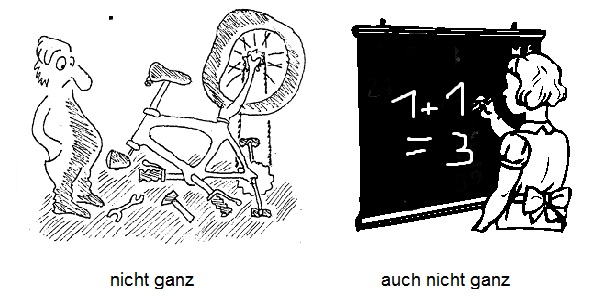 and welcome to our German Word of the Day. This time we will have a lok at the meaning of:

On the top 100 German words list of the University of Leipzig ganz ranks in at number 99. But this list is based on written German and I think in spoken ganz is even more common.
So let’s break it down, shall we.

Awesome, now we fixed it. Now it is not broken. Or in German… ganz.

Looks like one of those wise, deep quotes you can find on Instagram, but it’ not. Because ganzactually means (and this explains my weid intro)… whole,not broken :).

It is the direct opposite of

It does sound a bit technical or mechanical. So it’s kind of out of place for a broken bone or a broken heart. There, you’d use geheilt(healed).
But yeah… this sense of not broken is the original meaning of ganz, and it be traced back to the 8th century.
It’s not the only meaning though.
The word has broadened quite a bit. Just like me, during this quarantene.
I really sit too much. Hold on, let me lay down…. ah… much better.
Let’s continue.

The most important meaning of ganz today is probably: whole.
And that makes perfect sense. The word whole actually belongs to the same family as heal and its German brother heilen. The original core idea of that family was something like not injured or not broken and while words like heal and heilen shifted toward the idea of… well… health, and holy (heilig) went the spiritual route, the word whole slowly drifted toward the notion of all, entire.
And that’s pretty much the same that happened with ganz. From not broken to a entire or all.
Time for examples…

Now this is pretty straight forward so far.
Basically, any entire or whole will translate to ganze/m/n/r/s/ö/ü/8/xxx.
But ganz can also be a translation for all, and that’s a little bit tricky, because it doesn’t always work.
Here are some examples where it does work:

And here are some versions that don’t work:

Could you notice a pattern?
The key is to check if all is an element of its own or not. In the second group of examples, the all makes up an element of its own, while in the first group, it’s just a part of an element. For a quick check, you can try and replace it with everything or everyone. If that works, it’s probably not going to be ganz in German.
But there are definitely exceptions to this, like for instance if you have a number involved.

But don’t stress out about this. Just think of ganze/r/n/m/s as whole or entire for a start and let the other uses slowly grow with your sprachgeful, your feel for the language.
And speaking of sprachgefuhl… that brings us right over to the next use of ganz. A very very common colloquial use, that would make perfect sense – if it weren’t for a little twist.

ganz – the intensifier … kind of

We’ve learned that the core idea of ganz is whole, entire. And so it makes perfect sense, that ganz is also used in the sense of entirely or completely.

And this is especially in the negative with nicht ganz meaning not completely or simply almost.

But that’s not all. You see, the idea of completely is, in an abstract way, about an extreme. Like… if you’re completely out of toilet paper then you have reached one of extreme end of the scale of toilet paper possession. I’m almost there, by the way. One roll to go and nothing to be found in the shelves. So if you have tips on how to get a proper congestion, please share them in the comments. I’ll keep you posted on how it’s going in the bathroom, for sure.
Anyways… erm… how did we get here?
Ah, yeah… what I was getting at is that ganz is commonly used to shift something toward an extreme. Here are some examples…

Can you see, how it shifts the statement toward an extreme?
Now, in these examples, it doesn’t have a direct translation, so let’s look at some where it translates to normal intensifier like reallyor very, to make it more obvious.

Generally though, I think for you it’s better to use other intensifiers like sehr, total,voll or echt!
Why?
Well, for one thing, ganz can sound a bit clumsy, or even odd in some contexts and I can’t really give you a guideline for it.

But the more important reason why you shouldn’t start throwing ganz around as very or really is … the twist.

And that twist is that for some adjectives, ganz actually MODERATES them.
So instead of reallyor extremely, it expresses the idea of average or fairly.
And it does that for some of the most common adjectives, particularly good ones, that we usually like to intensify.
Let’s look at some examples.

All these adjectives that we use daily for stuff that we “like” – gut, gern, ok, nett, interessant, lustig or schön – especially ok,nett and gut. Ganz does NOT express the idea of really or very for them. It doesn’t necessarily make them weaker either, but if you want to say that something was really good or really interesting… ganz will NOT express your inner enthusiasm.
I mean, it’s not a huge misunderstanding if you say a movie was “ganz gut” and you mean that it was really good while the other person understands it was “pretty decent”. But that’s also tricky because you can walk around for years and misunderstand and misuse ganz without ever noticing.
So yeah… for the basic positive adjectives, ganz is NOT the way to make them stronger.
The big question many of you now have, is of course why.
But I don’t have an answer to it :). Seriously… I have NO IDEA. It’s just an oddness of German.
So let’s instead spend the rest of this article to look at a few common phrasings and expressions with ganz.

Some expressions with ganz

And the first one is ganz schön [something], which is a quite common way to say pretty or quitewith a bit of personal astonishment in it.

This personal tone is pretty much the difference between ganz schön and ziemlich. Ziemlich can be an “objective” word while “ganz schön” always implies that you think that and you’re maybe surprised or stunned or skeptical.

Cool.
Next up, there’s ganz und gar is a pretty strong intensifier and it works in both directions.

Then, there is the pretty common phrase im Großen und Ganzenwhich translates to overall, all in all.

And of course there are some related words like ganzheitlich (holistically) or the very fashionable Ganzkörperschlafanzug.

And I think that’s pretty much it. Hooray.
This was our look at the meaning and usage of ganz.
If you want to recap and check how much you remember, I suggest you take the little quiz I have prepared.
And of course, if you have any questions or suggestions, just leave me a comment.
I hope you liked it and see you next time.

This entry was posted in Must have words, Small Words, Spoken German, Vocabulary, What is the Difference. Bookmark the permalink.
Subscribe
52 Comments
Oldest
Newest
Inline Feedbacks
View all comments