A quick look at the meaning of "aufkommen" and what rising has to do with hitting the ground. 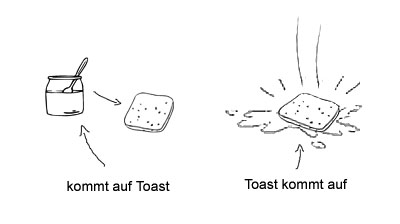 and welcome to a new episode of the series Prefix Verbs Explained, the series that starts to get on everybody’s nerves.
Come on, I know.
This series is a bit like mom spoon-feeding you spinach; a LOT of spinach. “One prefix verb for mommy, one prefix verb for daddy, one for grandma… (1 hour later) … one for daddy’s coworker’s friend, one for the guy at the bakery, come on SWALLOW!”
Seriously though, we don’t need to talk about all the prefix verbs that exist in detail. And we’ve actually already covered many of the really important ones. But there are still some left that need special attention, so let’s buckle up and do this, despite the slowly rising reluctance.
Hey, speaking of rising reluctance … what a coincidence … that would be a perfect context for the verb we’ll look at today.

And the big question is of course. Does aufkommen mean to come up ?”
They ARE literal translations, when you just take the parts. But it’s a German prefix verb we’re talking about.
Place your bets now :).

So are they? Well, more no than yes.
The English to come up– and I’m not a native speaker so please correct me if I’m wrong – has two main fields of use. One is for thoughts and ideas appearing on the scene and the other is for near future events. And idea comes up in a meeting and a TV show is coming up next.
And if we want to find a common core for those, we could call it “appearing on the scene, appearing in reality”.
The German aufkommen has the same core idea, but it has a different speed and vibe: it’s more of a gradual, slow emerging. Think of clouds building up at the horizon. Sentiments, fads, trends, storms… those are common things that aufkommen.
Let’s look at some examples.

Bourgeoisie… what the hell, French. That’s enough vowels for an entire German sentence XD.
Anyway, I hope the examples gave you an impression of the vibe and speed of aufkommen. You can also find it used in context of questions coming up in a meeting, but at least to me, that already sounds a bit odd and I would NOT use aufkommen in context of getting an idea. That’s just too sudden. Oh, and aufkommen absolutely DOESN’T work in the sense of events coming up. The most common way to express that would be something with nächste (next) but depending in context, there are other options.

Cool.
Now, this idea of emerging/evolving is not the only meaning of aufkommen. There are two others.
One is a somewhat formal, niche-y version for financially compensating for something; usually in contexts of some damage or credit. You come up with the money, if you will.

That’s nothing you’ll need in daily life though.
The third meaning on the other hand is really cool. Because when you drop that aufkommen at the right time, it’ll make you sound like a native speaker when it lands.
Oh, did someone say “lands”. What a coincidence. Because that’s kind of the meaning of aufkommen…. oh boy, these transitions are so awful, today. I’m sorry :). Seriously though.. aufkommen is a colloquial term for what happens at the end of a fall. Sounds weird at first, because aufis about upward, but hitting the ground does imply that you’re on top of something, so it does make sense.
One very common context is for people hurting themselves while jumping because the landed the wrong way, but it also works for stuff falling down.

This toast is actually never gonna aufkommen. Do you know why? Because it’s with surreals.
Hahahahahahahaha…. get it, get it? No?
Come on… surreals!
Like …cereals…
Uh… yeah… your face tells me that you want to move on, so uh… let’s do that.
There’s a noun das Aufkommenand it’s used in a few compounds in sense of grand totalor turn out.. like… Besucheraufkommenwould be the visitors turnout and Steueraufkommen is the total of taxes collected. But I can already feel boredom aufkommen, so let’s waste no time with this and instead move right on to the r-version.

Ahh, the good, old r-version… a bedrock of stability :). We know what we’re in for, and it doesn’t let us down this time either. As usual, it is an extremely literal, “locational” take on the combination of prefix and verb. Raufkommen means come upward and come on top of.

What’s the difference between raufkommen and draufkommen? Well, rauf puts a strong stress on the directed motion whereas draufis focused in the result – the being on top of. You can make this distinction if you want to. And if you’re like “Nah, that’s a bit too much” well, then just stick with rauf – that always works.

And I think that’s it for today. Another prefix verb tackled. Yeay.
As usual, if you have any question about any of this or if you want to try out some examples that I’ll correct, just leave me a comment.
I hope you liked it and see you next time.

das Aufkommen – the emergence, the advent, also: the grand total of something
raufkommen – come upstairs, come/go on top of something