A fun look at the meaning of "gegen" and why its many useful related words sometimes seem to have contradictory meanings. 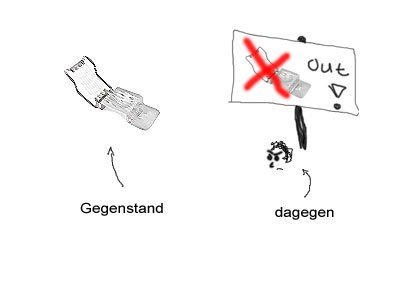 and welcome to our German Word of the Day. And today, we’ll take a look at the meaning of

Most of you probably know that gegen is the German word for against. It is a preposition and in German you need to know which case goes with a preposition. For gegen it’s the Accusative.
Examples…

As you can see, gegen and against are pretty one to one, but unlike against,which only has a weird look-alike again, gegen is at the core of a ton of whole family of words.
There are loads of nouns for instance, that all have a notion of confrontation and that translate with counter or oppo- in English

The answer to that answer is “this article”, by the way. Because it’s so unboring. And since we’re by the way anyway… have you ever really realized that opposite is a direct offspring of position? I mean… it’s super obvious and yet I was like “Oh, right… of course” when I consciously noticed it.

Anyways… there are not only nouns with gegen. There are also a few really useful small words. Like dagegen for instance. We already saw it in an example as a normal da-word, but it and its fancier version hingegen can also be used in a sort of independent sense of on the other hand, however.

Hingegen is probably the better choice because there won’t be any confusion with the “normal” da-word dagegen.
Anyways, another one worth noting is gegenseitig, which expresses the idea of reciprocity. This one is quite handy if you have to clear up a plural sich in German. Like here:

Without gegenseitig, the sentence could mean that the each unicorn is putting lotion on itself, but they’re a group doing this. Still quite sexy, but not as much. An more elegant way to say this would actually be to say einander (one another) instead of sich gegenseitig, but elegant shmelegant. German learners are honest, down to earth folk. We learn hard and then drink cold beers and eat kebab at the kebab stand right across from the school.

Which brings us right over to our next word… gegenüber. Depending on context, it can mean the other side of the street or just directly facing something. And it can also be used in a metaphorical sense of toward.

And of course we need to mention the word entgegen, which is actually one of the few prepositions that can be put AFTER what they connect. Whohoo, yeah… you’re super excited to finally meetone, I know :).

***note to interns who edit this: I think, I might have put one too many ge in this ge-form. Please take it out (and this comment, too, obviously). Thank you!! Oh, and don’t forget to leave 20 Euro coffee money for this week in the jar in the kitchen. I ain’t no charity :(!

Anyways… since we’re at verbs… there’s also a couple of verbs with gegen that we need to mention.
The first one is entgegnen. It looks SUPER similar to the preposition entgegen, but the meaning is quite different. Because entgegnen is a slightly bookish sounding word for to reply, retort, answer.

The other verb I want to mention is begegnen, which is a German for to encounter but it’s also used for to meetat times. Note that the spoken past is formed with sein, not with haben. Because… logic (#irony).

Cool.
So now we’ve seen a good selection of gegen-words and while they’re not all straight up against something, they all do share some notion of countering.
But there are a few words that don’t really fit.

Take die Gegend for instance. Die Gegend is a pretty common word for area in the sense of area of landscape or city scape.

Or what about die Gegenwart– most of you have probably seen it and know that it’s the German word for the present (tense) and also for the presence (in the sense of being there).

And last but not least, there’s der Gegenstand which is a German word for… object.
It’s used for undefinable tangible objects but also in a figurative sense for topics or matters of debate.

Gegend, Gegenwart, Gegenstand … one is about place, one about time and one about things. And what they all have in common is that they’re NOT about countering what is there. They ARE what is there, so to speak. They’re what we’re looking at, in a given moment. So are we looking at a singularity here? The moment where contra and pro are one and the same? Yin and Yang? The source? God?
Nope! It’s not that epic.
It’s actually not epic at all, because the original Germanic word gagan wasn’t about confrontation… it carried a notion of toward.
In fact, this notion is still alive in modern gegen and its cousin gen, which actually means toward.

The notion of confrontation is just a special kind of toward. This also explains the connection between again and against.
Against is the “strong” toward, while againis a “mild” toward that has focused on the idea of toward a former position/state. And if you’re a bit skeptical… just think of the word comeback... it can be just coming back to your former position. Or it can be a good argument in a confrontations.

**to the intern editing this: please find a clever way to transition to the end of the article! Thanks. No going home before it is done ;););) (I got you on cam, don’t forget)!! And delete this comment.

And that’s it for today. This was our look at gegen and the many useful words with it. Actually, there are plenty more but I think with the notion of toward and confrontation in mind you’ll be able to get all of them in context.
As always, if you have any questions or suggestions just leave me a comment.
I hope you liked it and see you next time.

gegen – against, around (for time), versus
gegen- (prefix) – oppo-, counter
gegen den Uhrzeigersinn – counter-clock-wise (is that a compound, maybe)
gen – fancy term for toward, usually for cardinal directions
dagegen – against it
wogegen – against which
hingegen, dagegen – on the other hand

entgegnen – to reply (bookish)
jmd. begegnen – to meet someone, to encounter
die Begegnung – the encounter

entgegen (dat.)- toward
entgegengesetzt – with the opposite direction
gegenüber – facing, across the street
gegenseitig – reciprocal
sich gegenseitig, einander – each other

die Gegend(en) – the area(s), the neighborhood, the neck of the woods

This entry was posted in A-Level, Adjectives, Must have words, Vocabulary. Bookmark the permalink.
Subscribe
40 Comments
Oldest
Newest
Inline Feedbacks
View all comments