A quick, fun look at the meaning of "die Laune" and how to say you're in a good mood in German. Also: the difference to "die Stimmung" and a surprise connection 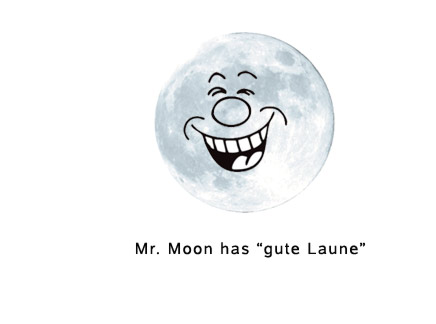 Die Laune is a word that every beginner should learn right away because it’s really super mega useful. Not as useful as haben or sein of course but it’s definitely something you can hear on a daily basis. Why? Because it’s one of the most important words Germans use to talk about their mood.
And if you’ve ever seen the faces of people on public transportation in Germany you know that it can only mean one thing: austere.
Nah, kidding. Laune means mood.

Now some of you might be like “Wait, I thought Stimmung means mood.” And that’s true. Die Stimmung this is actually the more general word for mood. Stimmungcomes from the German word for voice, die Stimme, and the idea is probably something about which tune you’re in (we’ve talked about that in a separate article and I’ll add a link below).
It works for the moodof a person as well as for the mood of a movie or a book or an event and it’s also often used in sense of vibe or atmosphere.

When it comes to talking the most basic talk about mood though – good mood, bad mood, better mood, these kinds of things – die Stimmung sounds a bit stilted or scripted. The idiomatic, colloquial, native sounding pick is die Laune.
And because it would be too easy to just switch the words, Laune comes with a different phrasing. Laune is nothing you’re in – it’s something you have and you get.

Gute/schlechte Laune haben or kriegen/bekommen… these are the most common phrasings and the ones you really should learn.
But there are others of course, so let’s look at some more examples.

And of course, there are also a few Laune-compounds, all describing a special mood for something. And because it would be too easy just to use the same structure as for the stand-alone Laune, the compounds are NOT something you have but something you’re in. German is just sooo much fun.

There are only a handful of common ones of these, but technically, you could make this kind of Laune-compound for pretty much any activity. It’s not something people do all the time but you’d most certainly be understood and people might even be impressed with your sprachgefühl. Like… instead of doing the boring fill in the blanks homework you could just say this to your teacher

Meh… okay, I’m not entirely sure if that’s how it would pan out…. but it’s worth a try, I’d say.
Cool.
Last but not least, beside the noun and the compounds, there are a few related words. There’s not a verb for Launeanymore, but there used to be one and the ge-form gelaunt is still around. Literally, it means “mooded” and you can essentially use it as an alternative phrasing for gute Laune haben.

And then there are the two adjectives launisch and launenhaft.

They’re both pretty much the same and there are many many translations for them but the underlying idea is that of constant, repeated, quick mood change.

And that brings us to the origin of the word Launebecause it’s actually inspired by a companion of ours that also constantly changes. Like, some nights it’s full, some nights it’s gone, some nights it’s only half there. Now some of you might be like “Hey, that sounds like my spouse.” And it is a spouse… kind of. The spouse of earth. The moon.
Throughout the ages, people believed (and still do) that the moon phases have a strong impact on our moods. And so the Germans slowly started using the Latin word for moon in sense of mood. And what is the Latin word for moon… exactly luna (which is also where lunatic and loony come from, by the way).

So when you say “Ich habe gute Laune.” you’re kind of saying “I have a good moon.” … I mean, it’s not like anyone is aware of that. The connection is completely forgotten. But it’s pretty cool, I think. Luna, Laune,moon, mood… awesome.

So that’s it for today. This was our look at the word die Launewhich is like THE word to express what basic mood you’re in. Here’s a blueprint for the phrasings you absolutely should start using.

As always, if you have any questions or suggestions or if you want to try out some examples, just leave me a comment.
I hope you have gute Laune now and see you next time.

This entry was posted in A-Level, Must have words, Nouns. Bookmark the permalink.
Subscribe
25 Comments
Oldest
Newest
Inline Feedbacks
View all comments