The meaning of German “alle”

A fun look at the meaning of "alle" and how one word can be "empty" and "all" at the same time. And we'll learn when to use "alle" and "ganze". 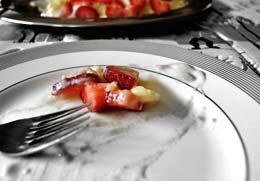 Seems boring enough at first glance, right?
Alle
is of course the German brother of all and the core idea is the same.
But the usage is a little different. Also, German has this other word ganze, which also means all, and the question is of course how they’re different. And as if that wasn’t enough, alle also has a second meaning and that one can REALLY confuse you if you don’t know about it.

Yeah… definitely something to clear up, so let’s friggin’ jump into it.


Let’s start with a few examples…

Seems like the two words line up very well, right?
But there’s actually a really big difference between German alle and English all, and that is that German alle ONLY works for entities in plural. Unless you’re some linguistic super genius you probably haven’t noticed it, but the examples we had were all about plurals… all my friends, all the kids and all the movies.

The English all can also be used for singular, in the sense of entire. Like in all night or all my life.
And THAT generally does NOT work with alle.

This makes NO sense and it might well confuse a native speaker because the alle makes them feel like there’s a plural.
If you are not sure, just try to replace all with the whole or the entire and if that works, then ganze is your word.
So for this type of all, the proper translation is ganze.… or ganzen or ganzes and so on. You know… adjective endings.

So, for plural-all use alle, for singular-all use ganze. You can even make a mnemonic from this… plurAL like alle and sinGular. Pretty awesome, I know.

Anyway, there’s actually kind of a third group besides singular and plural and that is the “mass-nouns” – those that are used in singular but can stand for a large quantity of the thing.  Like beer or hope or money.
And for those, we actually have the choice. We can either use ganze like we just learned, but we can also use all. And yes, I mean all in German WITHOUT e.

The version with all sounds fancier and a bit poetic even, but it doesn’t need you to put adjective endings, so that might be the easier option. Just make sure to NOT say alle – that would sound really weird, again.

Cool.
So now we know when to use alle as a translation for all. But that’s not the only thing it is used for. It can also be a translation for everyone. And in that role it gets what most pronouns get… case endings. Yeay!

And I’m sure that many of you know the other German option for everyone – jeder/s/e/m/n.
So what’s the difference?
Well, grammatically, alle* is a plural while jede* is singular.

And that has an effect on the meaning, or let’s say, tone.  Alle focuses on the group as a whole while jeder puts a little more emphasis on the individual. So in the first example, I’d say alle is definitely the better choice because you’re talking about a crowd. In the second example, jedem would work perfectly fine as well.

Anyway, so alle can mean everyone. And it is actually also the best translation for everything.  All we need to do then is add a little s and make it alles, so it doesn’t sound “plural” anymore.

And I guess we should not forget to mention alle in the context of time, because there (and only there) it can be a translation for every.

Cool.
So now we have a pretty good overview over how to use alle for the overarching theme of all.
But as I said in the beginning… and that has nothing to do with what we’ve seen so far.

The (very) other meaning of “alle”

Let’s again start with an example…

Yes, this is not a typo. There are really two alle in a row. German, you’ve done it again, you son of a gun… another stupid looking phrasing.
So, the sentence is correct, understandable and might be uttered this way in daily conversation.
And the meaning is that all three cakes are… gone, finished, eaten up.
Because THAT’S the second meaning of alle, or let’s maybe say of the phrase alle sein. It expresses that some sort of stockpile is emptied.
By far the most common context for this one is food, but you can also find it for other “resources”

And it is even used for persons in a way.

Where does this meaning come from?
I’m not sure, to be honest, but if we think of the sense of entire as complete then we just have to flip it negative and we’re there… like… when I have all Pokemon cards, my set is com-pleted. When I have drank all my beer, it is de-pleted (“negative complete”), if you will.
Either way, make sure you DON’T think of it as empty because alle is NOT about the container – it is about the content. So my beer can be alle but my beer glass cannot.
And also, this alle is rather colloquial and focused on our daily needs, so don’t use it in writing.

All right,  now to wrap this up I want to give you 2 of the many useful idioms with alle.

Just to make sure… it is alles as the English all could be technically replaced by everything and it is allem because it is case 3. Why is it case 3? Because it is in and we are talking about a fixed location here. No idea, what I just said? Don’t worry… I will get to it my On-line course and then it won’t be any miracle anymore.
The second idiom comes very handy in inner city traffic:

Garnished with a little “du Idiot!” you have a formidable version of

And just because the construction might be a little confusing, here is the blue print… just fill in the person of your choice. The words in parentheses are options for the sound. They do not really mean anything here. You may use all three at once

And that’s it for today. Das war alles für heute :).
This was our little look at how to use alle and alles.
If you want, you can take our little quiz and see how much you remember :).
And as always, if you have questions or suggestions, just leave me a comment.
I hope you liked it and see you next time.

And let’s get one thing out of the way right away because it’s a BIG mistake: not at all is translated NOT translated with alle. It is translated as überhaupt nicht.
Alle does NOT MAKE ANY SENSE in that context.

With that out of the way let’s first look at all that all and alle have in common and yes this phrasing was on purpose.