Most of you know that 'etwas' means 'something'. But German also has 'etwa' ohne 's' and it's actually kind of common. Today, we'll learn what it means. 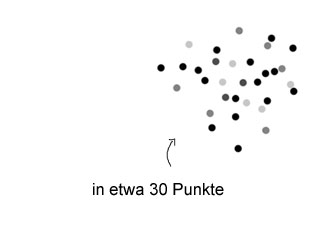 Now you’re probably like “Emanuel, I think you forgot an ‘s’ there”
But no, I didn’t.
Etwa without the ‘s’ is a real word and it’s actually kind of common in daily life.
So let’s take a look…

Of course, etwa is related to etwas. But it’s not just a shortened version of it.
Most of you probably know and loooove the irking little irgend- and these words like irgendwo (somewhere), irgendwie(somehow) or irgendwann (“somewhen”).
Well, guess what… several hundred years ago, German had a second word like that: ed(des). Just like irgend-, it carried the notion of unspecific and you’d add it to the same words you’d combine with irgend-. Edde(s)wer meant someone, eddewo was somewhere and so on.
But the other languages were like “German, dude, this is super confusing. Do you really need two of those?!?!”
German was like “Yeah, absolutely. I thought about getting a third one.” but the other languages kept pushing and eventually, German was like “Ugh… fiiiiiine…. but I wanna keep two words.”.
The deal was struck and edde-, or et- to which it had been shortened, disappeared and only two words: etwas and etwa.
Etwas is pretty much the same it used to be hundreds of years ago: something.
Etwa, probably a blend of “etwo” and “etwann”, slowly got less and less specific until it was just that: unspecific. That’s the core idea of etwa, making it a translation for (round) about and a fancy synonym for ungefähr and circa.

Ungefähr is the more common choice but etwa does pop up here and there, especially in the combo in etwa, which also means (round) about and which is especially common in contexts that are NOT connected to numbers.

Now you’re probably like “Wait, so etwa and in etwa means the same?!?! Then why use in?”
That’s a great question and there’s a simple answer.
I just don’t know it.
Okay, seriously… I don’t think there’s a logical explanation for why in etwa ended up an idiomatic phrase.
But it might have something to do with the fact that etwa has a couple of other meanings. And one of them is:for example.
Wait, what?! For friggin’ example??? That doesn’t seem to make any sense.

But with a bit of mind yoga, it actually does. You see, we just learned that etwa means roughly, round about. So, it is about approximation. And that’s kind of what an example is. A different kind of approximation, no doubt. But still, roughly 1 hour and an example for a grammar rule, they both give us an idea of the real deal. Meh, no idea if I’m making sense.
Anyway, let’s look at a couple of examples.

Now, this example-etwa is quite rare and nothing you’d use in daily talk.
That’s different for etwa in its third use: asa marker of disbelief in yes or no questions.
And because it sounds even more theoretical than doing my tax return on time, let’s just look at examples right away.

There isn’t a one word translation for it but I hope you can see what etwa does. It expresses that the person asking would be really surprised or shocked if the answer was yes. And it’s super common in rhetorical questions that basically imply “No.”. Does it connect to the etwa versions we’ve had before? Well, not really. The best I can come up with is making a connection through the idea of example. Like… you’re at a bar with a friend and he’s like “I’m gonna go home” and naturally you’d want to know why and you’d be like “You’re not tired, are you?” using a reason that you think is stupid as an example for reasons to go home.. uhm… yeah… I’m really pushing it here :). If this made any sense to you, then great, but if not, don’t worry about it.
Just take this disbelief-etwa as a separate meaning. But you definitely should add it to your active vocab because this etwa is incredibly common and it’s one of those little words that can really “up the native”.

Cool.
Now, we’re almost done but there’s one more thing we need to talk about. Because at some point, people felt like it was a genius idea to add the typical adjective-maker -igto etwa, thus creating one of the weirdest looking German words ever: etwaig.
Man, that really doesn’t look like a German word at all. But it exists. The translation is usually potentialbut the core idea is the same as for the basic etwa – the notion of unspecific, unforeseeable.

Meh… I’m not sure if I like it when unicorns think about this stuff. In fact, the more I think about it, the more I’m sure they shouldn’t even appear with etwaige in one sentence. Unicorns are born of magic and fantasy, etwaigeis born of pontification and bureaucracy. And the only thing they have in common is that you won’t come across them in real life.
Badum-tish.
A shout out to my gag writers. They worked hard on this last one.

And that’s it for today. This was our look at the meaning of the little word etwa, which is NOT just etwas with an s missing and if you use it correctly, people might ask you “Bist du etwa Muttersprachler?” :)

As usual, if you have any questions or suggestions just leave me a comment.
I hope you liked it and see you next time.