"auffallen" looks like an oxymoron - "to fall up". But it's actually a really useful translation for "to notice". Today, we'll learn why. Also: more verbs :) 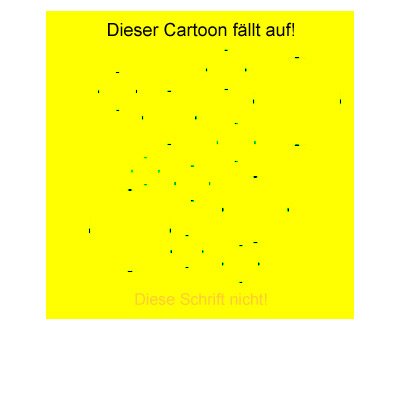 and welcome to a new episode of Prefix Verbs Explained, this time with a look at the meaning of

Auffallen is kind of pretty common and useful in day to day conversation and it’s one of those verbs that can really “up your native”. But it’s kind of below the radar and many learners, beginners as well as advanced, don’t ever notice auffallen. Which is kind of ironic, because noticing is actually what it’s all about.

Auffallen is about the idea of catching someone’s attention or being noticed by someone. Here’s an example.

What does that have to do with falling and auf? Well, you can think of it as falling “on someone’s head” or just “falling open” so someone can see it. So both notions of auf, the on-top-ness and the open-nesskind of make sense here, in the usual twisted prefix verb way.
Actually, auffallen is kind of the external cousin of einfallen. Einfallenmeans to come (fall) to one’s mind and it’s about ideas and memories. Auffallen is about your perception of the world and the stuff you notice there. The grammar is just as twisted as for einfallen, though. Instead of “I notice something” you say “something falls on/open to me“.
Let’s look at some more examples

Now, auffallen also works without mentioning a specific person who notices something. Then it expresses the general idea of standing out or being immediately visible.

Cool.
Now you’re all like “Hmm… let’s see what the other meanings are.”
But there is no other meaning.
No, no… I’m not joking. I know it sounds crazy but auffallen really only has this one meaning. Poor auffallen. Like… it’s always been the odd one out. Already in verb kindergarden, all the other prefix verbs with their multitude of meanings would mock auffallen. “Onesie” they would call it. And then laugh in its face. And they wouldn’t see how useful auffallen really is. Well… we do, auffallen. We do see it. You’re a great verb. And you have a great relate… my god, what am I saying. Autumn gets me all melancholic and whiny.
But seriously, auffallen is a really useful word in daily life.
And so is the related adjective auffällig. Auffällig expresses the idea that something is eye-catching, flashy or striking and because these characteristics kind of come from being different from the norm, and because people have a tendency to get weirded out by stuff that is different than the norm… uh… damn, I forgot the beginning of the sentence. The point was, auffällig can also express the idea ofsuspicious and the connection is “standing out” – “being different” – “being strange” – “being suspicious”.

And of course we also need to mention unauffällig and I think most of you can guess that this is the opposite. It’s about NOT catching the eye, NOT standing out. The translation depends on context and

Cool. Now let’s discretely move on to the r-version :).

Rauffallen means to fall on top of something and it’s… well… rare. There simply aren’t that many contexts for it and if there is one drauffallenis the more common version, I think.

So, I really think you won’t ever need this verb.
And because rauffallenis so incredibly useless, let’s instead look at it’s “opposite” runterfallen. Because there’s something really interesting to learn and if you do it correctly, you’re friends will notice and they’ll be impressed by how native you sound.

So far so good. Now let’s get to the interesting part. And that has something to do with the phrasing. Take a look at these two examples:

Looks like runterfallen actually also mean to drop. But does it?

This is super hyper mega uber wrong. Runterfallen does NOT mean to drop. Not directly, anyway. It means to fall down and the German sentence in the last example means “I fall down my cellphone”. Like… we’re Antman and we’re tumbling down our iPhone or something.
So what’s up with the example about Thomas dropping his cup? Well, the solution is that Thomas is actually NOT the subject. Instead he’s in Dative case. It becomes clear once we use a pronoun.

I used mir, not ich. Literally, this means

Now, this weird phrasing is actually the standard way to say that you drop something. And the interesting thing about it is… that you’re not really guilty. Technically, you don’t do anything.

The German version really captures that it wasn’t intentional at all. It sounds almost as if you’re just as much a victim as the owner and the computer itself is to blame. And of course we can also switch around the elements.

Wait, that doesn’t work in English :). That’s the “cool” thing about cases, that you can move stuff around and it doesn’t change the meaning.
Anyway, here’s the structure in general

If you drop something on purpose, then runterfallen is the wrong word. You’d use fallen lassenthen. But for unwanted droppings, the weird structure with the dative is the way to go.

Cool.
And I think that’s it for today. This was our look at the verb runterfallenand the twisted grammar you use for dropping something…. wait, no… actually it was our look at the verb auffallen.
If you want to recap a bit and check if you understood the grammar parts, you can take the little quiz I have prepared for you
And of course if you have any questions or suggestions, just leave me a comment.
I hope you liked it, and I’ll see you guys next time.

meaning:
auffallen – stand out, catch the eye, be noticable
mir, dir, ihm… auffallen (an )- I, you, he… notice(s) something (about)