In this post, we'll learn the different ways to translate "anyway" to German. 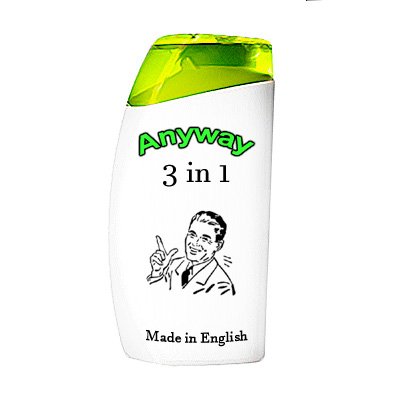 and welcome to our Word of the Day. And this time, it’s actually a pretty special episode because instead of taking a German word and explaining it, we’ll take an English word and look at how to translate it properly.
The reason I haven’t done this kind of articles yet is that not all of you are native English speakers and I wanted to keep the focus on German and use English only as a means to an end.
But hey, it’s 2020 and I just felt like doing it.
So, today we’ll talk about the translation of:

And not only because it is a really common and useful word, but also because looking at this can help us understand the differences between a bunch of German words learners are slightly confused about.
So are you ready to jump in?
Perfect.

Taken at face value, anyway means something along the lines of “no matter which way”. Something is the way it is, no matter the “way”. So there’s a core notion of “makes no difference”. That’s what unites all anyways. But we can also distinguish between three different use-types of anyway:

Why are we making this distinction? Well, of course because German uses different translations for all three, and mixing them up would be… you guessed it… confusing.
So, the first type, the one we called contradictory, implies or expresses a conflict or contradiction between two things.
Here’s an example:

The anyway does two things here. First up, it signals that Maria’s being at the party has no effect on my decision to go there. That’s pretty much in line with the core of anyway we found – Maria or no Maria, I will go.
But in addition to that, the anyway in the example ALSO implies that the fact that Maria is there would normally be a reason for me to not go. That’s what I mean by contrast or contradiction.
Synonyms for this type of anyway are regardless, nonetheless or despite that. Which is probably the best to keep in mind, because it leads us right to the German translation for this contrast-anyway. Some of you might have a hunch already. I am talking of course about … trotzdem.

Trotzdem is THE translation for anyway, whenever there’s a contradiction involved. Actually, let’s say it’s the only translation. Yes, theoretically there are a few alternatives to be found in the dictionary. But they’re barely ever used in normal daily conversation. Any they look like letter garbage. I mean, come on… nichtsdestotrotz. That looks like my cat walked across the keyboard.
So yeah, whenever you can replace anyway with despite that (WITHOUT changing the meaning, of course) use trotzdem in the translation.
Here’s a couple more examples.

Cool.
Now let’s get to the second use of anyway, the one I called it “aligned”–anyway. On first glance, it can actually look very very similar to the first one.
Let’s take the example with Maria and the party again but modify it slightly.

We haven’t really changed that much, but the whole notion of contradiction is gone now. Instead, the example sounds like the fact that Maria will be at the party might actually be a reason for me to go. But I don’t need this reason, because I am going even without her being there. I was gonna go anyway. Again, her being there has no effect on my decision, but this time my decision and her presence are “in alignment” not “in contradiction”, if that makes sense.
I know this one is much harder to grasp, so let’s look at another example, comparing the two.

This time, the only difference in the examples is the location. But that changes the entire context and thus also the “vibe” of the anyway.
In the first version, me being at work is clearly a contradiction to me having a cold, I mean… especially these days, with Corona
The second example on the other hand says that the fact that I have a cold is not a problem, because I was gonna stay at home even without it.
I couldn’t think of a synonym for this aligned-anyway, but a fairly good test is to add “so it’s a match.” to the end.

The first sentence got pretty weird. I mean, how is having a cold and being at the office a match. But the second one works fine.
And how do we actually translate this aligned-anyway?
There are actually several options here, but the two most common and natural ones are sowieso and eh.
And yes, eh is a word! And a pretty common one, too. I’ll post a link to my article about that below :).
So here are the translations for the two examples we had:

Cool.
We’ll see more examples in the exercise of course but before we get to that, we have to talk about the third type of anyway, the conversational-anyway one.
This one is actually pretty easy to spot. It is the one that we say before we say an actual sentence, to kind of switch topic or get back to it after a detour, or just move aside what has been said before.

I think this one is pretty clear, but how do we translate it to German?
Well, there are several options and it depends a bit on context or “tone” which one to pick. Here they are, each with their closest counterpart in English

Now, I know many of you are now like “Please tell us exactly when to use which with examples.” but I’m not gonna do that and I urge you not to get hung up on these. There are more options, people also make all kinds of combos and you just need to develop sprachgefühl for that. But German doesn’t use this conversational-anyway as English anyway, so often it’s best to just leave it out.
As far as the example goes, number two or three feel like the most natural fit to me.

Oh and let’s note that jedenfalls is actually a proper part of the sentence with the verb after it. You can’t use jedenfalls as a standalone, like you could the other.
Cool.
So those were the three types or ways of using anyway and how they each translate to German.
Here they are again:

And now all that’s left for us is a little practice.
Usually, I’d include that here, but I haven’t prepared it yet, and since many of us have to stay put at home these days, I thought, I’ll just give you the article now, so you have something to read, and follow up with the quiz in a few days :). So stay tuned!

And that’s it for today!
This was our look at how to translate anyway.
As always, if you have any questions or thoughts or if you have a specific use of anyway that you’d like to have a translation for, just leave a comment and we’ll clear things up together.
Oh and also, what do you think of this kind of article?
Should I do more “How to translate”? If yes, please let me know which words you’d like me to talk about.
I hope you liked it, and I’ll see you in a few days with the quiz.