'verwirren' and 'verwechsel' both mean 'to confuse'. But confusing them is confusing. Today, we'll learn what the difference is and when to use which one. 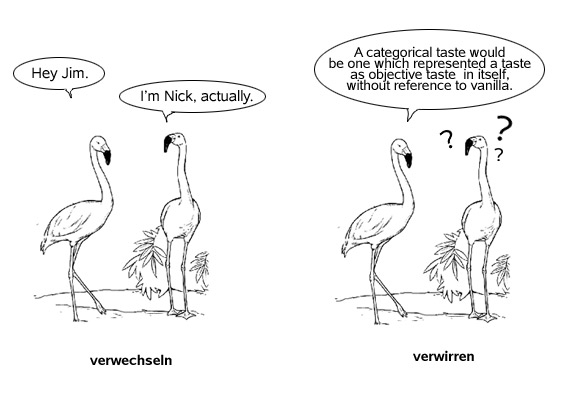 And since that difference isn’t a big deal at all we’ll also take a look at how to say confusing and confused because there’s a lot of …  confusion.
So, are you ready to untangle some hair, to descramble some eggs, to un-… erm… unravel some Debussy?
Are you ready for all this?
Cool.

Let’s start with the look at verwechseln.

The Meaning  and use of “verwechseln”

Of course it is a combination of the infamous ver-prefix and the basic verb wechseln. And in case you didn’t know… chs is the German way to spell out the “x“-sound. For example the German title of one of these superhero movies is:

Okay not really… but there are plenty of words with chs sounding like x. Now, wechseln has been around for a while and it hasn’t changed much in meaning. It comes from an old old root that roughly expressed the idea of one for the other and this root came from an even olderer root – the Indo European *weik, which meant to bend. One of the many aspects of bending is making way. A twig bends aside making way for the wind. Something makes way for something else. And this is the core idea if wechseln... one (in exchange) for the other. And not only for wechseln. Also vice-  and week (Woche)  (both related to vicarious) come from there. For vice-president that totally makes sense… one president for the other. As for week … well,I’ve read that it is something about succession…like, one day after another. I don’t really know.
But anyway, what matters is that wechseln is based on the idea one for the other. And it has stayed true to that.

English is really like… “Context… fill in the details for me!”. I mean… “changes his shirt”… maybe I mean that he cuts off the collar to make it cooler.
The German wechseln is crystal clear. He exchanges one shirt for the other.
And that is always what wechseln is about… abwechseln is alternate, auswechseln implying that one thing is gone after, einwechseln implies that one thing is in after, durchwechseln implies that every item or person gets a turn. Wechselhaftes Wetter is weather that changes from clouds to sun to rain and back to sun. Wechselgeld is the money you get back along with your purchase, Wechselkurs is the exchange rate. I think whatever you see with wechseln... you can probably guess it with the “one for the other”-idea in mind.
All right.
Now let’s see what the  ver-prefix adds to the verb. If you’ve read the article on ver– (link below) then you know that it has 4 possible ideas. For wechseln it is… the wrong-idea. So if wechseln is to take one for the other, then verwechseln is to mistake one for the other. That is just the idea behind the verb, the core. As usual, the actual translations vary :).

So… it can certainly be quite confusing to verwechseln something, but it is always about two alternatives.
Real confusion looks different. And that’s where verwirren comes in.

The core of verwirren is the word wirr. Dict.cc gives a lot of translations but the essence of all of them is in disorder.My hair can be wirr,  I can babble wirres Zeug (incoherent stuff), and on my desk there can be a Wirr Warr (chaos, jumble).
Now, just like with verwechseln we have the ver-prefix but for verwirren it doesn’t add the idea of wrong, it adds the idea of change. Verbessern for example means to make better (to improve) and verwirren works just the same… it literally means “to make or bring into disorder”.

This example was kind of an exception though, because verwirren isn’t actually used for things… at least only very rarely. The standard word is durcheinander bringen.

Verwirren has a very strong focus on people’s minds. That’s what’s being put into disorder.

So … this is verwirren, and actually… before we move on let’s looks at verwirren and verwechseln back to back.

Do you know which is which?
Exactly… the first one is verwirren because the cases bring my mind into general disorder. They second one is verwechseln. Cases are a thing so verwirren wouldn’t  really the best word anyway. But what we mean is that we take one case instead of another… and that is verwechseln.
I hope you can see that the words are quite different and you shouldn’t mix them up.

That makes no sense at all and I would be super confused.
And that bring us right to our next point … confusing and confused.

I don’t really know why, but for some reason  people often get confused when they try to say that in German. So instead of just checking the translations let’s dig a little deeper and do some theory.
Yeeeaaaay!
Like any other verb, to confuse has several different forms. And two very important forms are confusing and confused. Actually, confused are two different forms that look identical but let’s not get into that now. In grammar terms confusing is called the present participle and confused is called past participle. Now, it’s important to keep in mind that these are really just forms… they can have different functions. Just like, say, ice… it is a form of water, but we can use it for ice skating or cooling our drink. For today, it doesn’t matter what functions these forms have, exactly. We just need to know the core-idea:

German has the same forms. The past participle is the famous ge-form … the one we need for the spoken past.. but let’s not get into how the forms are called or how they’re built. They exist and they have the same ideas.
Now, if your teacher rambles on about the n-declension and you want to say that your mind is in serious disorder… which form do you need? This one:

because it talks about how something is.  The following sentence is not wrong:

and yes, it does say “I am” in there, but in essence it talks about what you do… you confuse people.
This form would be perfect if we want to talk about the n-declension. Because that’s what the n-declension does… it confused the hell out of people.

Again, using verwirrt (confused) wouldn’t be wrong… but then we would say that the n-declension’s mind is in disorder.
All right.
Now some people may be asking “Wait a minute, what is the n-declension that sounds interesting?” And my answer is, the n-declension is a ginormous pimple on our butt. It’s good to know that it’s there because then we know where the pain comes from but we shouldn’t try to squeeze  it (into our minds) if it’s not “ripe”. It’ll hurt worse after so let’s not waste our time. The brain will take it in when it’s ready… just like pus will come o… you get the idea :).
So … again  here are the forms:

Oh I almost forgot… earlier we had durcheinander bringen as to confuse for things.Remember? This phrasing actually works for both… minds and things and so durcheinander is also a good and common translation for confused.

Bu wait… what about verwechseln? Can’t this also translate to confusing and confused? In theory, yes, verwechseln does have the same forms but usually confused and confusing are about the disorder of the mind… not about one thing being mistaken for another thing. So most of the time the verwirren-words are the ones you need.

Last but not least one word about confusion. It can be either – die Verwechselung and die Verwirrung – but I think it should be easy to say which is which to use if you keep in mind the core of the word… verwechseln is to mistake one for the other, verwirren is to cause (mental) disorder.

Wait… is that correct? I think I might have confused something. But don’t let me confuse you ;).
So… I think that’s it for today. That was our German Word of the Day – What is the Difference special about verwirren and verwechseln. And because theory is nice, but practice is the real deal, I actually also have an exercise ready for you. It was part of one our epic Advent Calendars and you can find it here:

And of course, if you’re still confused about something or if you want to try out your own examples just leave me a comment.
I hope you liked it and see you next time.