A quick fun look at the meaning of the combination "von... aus" and the very useful phrase "von mir aus". 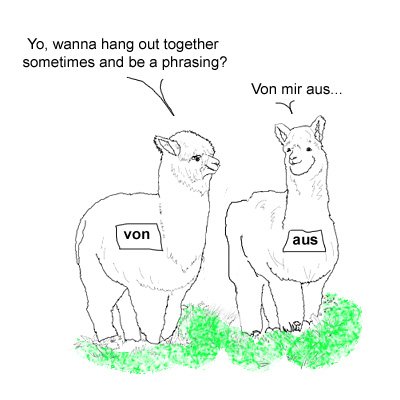 and welcome to our German Word of the Day. And today, it’s actually two words because we’ll take a look at the meaning of the combination

The idea for this came when someone recently asked a comment about the phrase “von Natur aus” and why there was an aus in there.
At first, I was gonna use answer 3b from the “Lazy German teachers’ Handbook” …

“I can’t explain that. It’s a fixed phrase and you have to learn it.”

… but then I realized that it’s actually kind of a useful phrasing that can even get you laid, or a raise if you say it in the right moment.
So let’s take a look.

If we analyze the phrasing, it’s actually pretty redundant. Von is a preposition that expresses origin…

And aus is also a preposition that expresses origin…

But there are differences between them, of course. In short, aus has a focus on exiting, emerging while von is more about leaving a point of origin and usually, German makes a really big deal about when to pick which one.
But German also loves to troll its learners and thought it would be really funny to use them in combination. English actually has something really similar.

This is actually even worse because we have three prepositions.
But this is pretty much a fixed phrase. The German von … aus is actually a construction that we can use and modify for real locations.

That last one is particularly tricky, because the aus is at the end and most learners will try to connect it to the verb somehow. Outstanding job, German! If your goal was to confuse people, then you’ve definitely achieved it.
“Well, thank you.”
Oh, you’re welcome, German. Would you maybe care to tell us if there’s any difference between von… aus and just a plain von?
“Hmm, I don’t know… I didn’t put that much thought into it, to be honest…. maybe the extra aus adds a subtle vibe of outreach. Like, the von introduces the point of origin, and the aus adds a vibe of reaching out. But it’s really subtle.”
So you’re saying that it’s mostly personal preference and a pure von is never wrong?
“Yup, 100%.”
Cool, thanks German.
Now, German just said that it 100% doesn’t matter. But we all know what that that’s code for “There’s a bunch of exceptions where it does matter.”
And von… aus is no different. There are a few phrasings or contexts where we really need von… aus. And they’re actually kind of useful, so let’s take a look.

The one that’s most connected to actual location is for talking about left and right in relation to yourself.

You could also say mein links oder dein links, but the phrasing in the example is more idiomatic.
Next up, we have the one that we’ve already mentioned in the intro: von Natur aus.

The translation depends a bit on context and can be naturally, inherent or by nature but the idea is always that something is “how it came out of nature”. So it’s pretty straightforward, I think.
That’s not really the case for the next phrasing. Or at least, it’s not as obvious.
Take this sentence about the incredibly rare occurence of Thomas cleaning the kitchen.

Obviously, we have a self reference here and since it’s behind von, it’s of course in Dative case. Because von wants Dative. Now, if we go by what we’ve learned, this means that he himself was the “point of origin” for the cleaning. And that is not too far from the actual sense. Which is that he did it out of his own drive, without anyone telling him to. The idea is inner drive, but it’s kind of hard to find a good translation. Neither voluntarily nor self-motivated really do the job, but I think you got the idea.

And this kind of brings us right over to the last use for today and to how von… aus can get you whatever you want, if you use it in the right moment.
If your German boss is like: “Hey, willst du mehr Geld?”
you can just answer: “Von mir aus.”
And katching. Money in da bank!! You can thank me financially via Paypal.
Seriously though… von mir aus is a really common, really good way to express that you’re okay with something. The translation and vibe hugely depends on context and how you say it and it can range from genuine approval to actually expressing loathing.

Does that tie in with the “normal” use of von… aus? I think it does. Von mir aus kind of says “from my point of view”.
However, I want to stress that it’s NOT used as a general way to talk about opinion.
Like, you wouldn’t use it to say what you think about a movie. And you wouldn’t use it to ask someone’s opinion.
Meiner Meinung nach is the go-to phrasing for that.

You can think of von mir aus as a fixed phrasing that expresses that you’re fine with something – be it genuinely, or ironically.
And even though that seems to be rather limited, the phrasing is pretty common and it’s absolutely worth adding it to your active vocabulary.

And that’s it for today :). This was our look at the phrasing von… aus, and I am sure you’ll now start seeing it in German.
If you want to check how much you remember and also test yourself with some tricky sentences, you can take the little quiz I have prepared.
And of course, if you have any questions or suggestions, just leave me a comment. Also for the quiz, by the way. As silly as they seem sometimes, there are some tricky questions in there designed to give you some deeper understanding. But sometimes, my questions just suck. So if you’re confused by something in the quiz, please please ask.
Anyway, I hope you enjoyed it, have a great week and see you next time.