"sogar" means "even". But why? Today, we'll learn about the meaning of "gar" and "sogar" and we'll see what those have to do with pasta :) 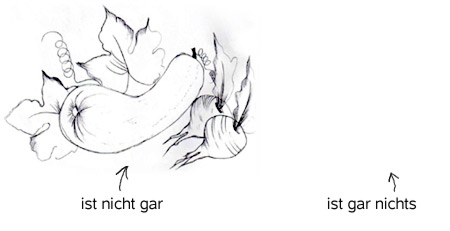 and welcome to our German Word of the Day. This time we will take a bite of the word

I hope it’s cooked. I mean… I don’t want to get Cinderella. Had that as a kid once. I was throwing up for days…
Awfully unfunny joke as an intro. Check.
Yeah. 2014. Getting things done.

Gar is a weird word. It means cooked. And it means at all. And it has come a long loooooooooong way … (click here for the obligatory flashback harp)
Once upon a time, the Indo-Europeans found a root (e)r, and it meant something like to get going, to get into motion. They planted this root and watered it daily with use so it grew into a tree, a huuuuuge tree with many leaves. To run is one of those leaves, as is to ride. And to rise. And to raise … oh and earnest.
A few centuries ago, there also was a Germanic word *ga-arwa (or garawēr or something similar… the sources vary) on that tree. This was a combination of a form of the original root and the prefix ge/ga which the Germanic people back then used to add to all kinds of things to imply completion. The meaning of that word was something like “done get going”… that is my very personal translation :)… and it meant something like… set, prepared. Now, in English people soon were just like “Meh… let’s just drop the ge, shall we“ and so geraete turned to .. ready. They did keep one word with the ge in it too… to gear (up), which clearly also has the prepared, set, ready idea in itself. Run, ride, gear, ready… they’re all one big family.
In German, they never had a problem with ge- . They loved it. And so they kept garo in the meaning of ready, prepared. But for some reason, they also kept playing around with the root and after a while they replaced the ge with their new darling prefix be-. And that’s where bereit comes from.

So… bereit and ready don’t only mean the same… they also are family. I was surprised when I found that out. Now, what happened to garo? Well, bereit was a huge success. Garo lost more and more ground and today, the only field in which it is still the word of choice for ready is… the kitchen. And not even the general ready as in dinner’s ready. No. It just means cooked as in the opposite of raw.


There is also a verb garen, which means (gently) cooking.

Now, of course we don’t talk about gar because it can be used for cooking.
But on it’s walk through the centuries gar has taken on and lost other functions too , some of which it still has today.
So… the original meaning was a general ready or prepared. That is not very far from a general idea of completion. And, as we can see in English, that idea can be used as an intensifier

I mean… empty is empty and not sort of empty or almost empty. So what is completely adding if not intensity. And gar was used for exactly that.

This has come a little out of date. You can find it here and there but definitely sounds like you’re stage acting. But there is one use-case in which this gar is common… very common… incredibly hyper XXXL common.

Let’s go right ahead and look at so… wait, what’s that siren? Oh god, German spelling police… quick, I have to write it as two words.

That’s no joke, by the way. … they really did that. So awful.
All these versions, with nicht, nichts and kein are really really common and people use it every day. And if you want to put even more emphasis on the negative… well just extend the gar.

Now, sometimes people also use it with other words of negation…

That is weird sounding to say the least though and you shouldn’t try it. It might work but it might also be just wrong. But with gar nicht, gar nichts and gar kein/e/n/m/r/s … those always work and you should start using them. By the way… stretching out the gar is not the only way to make it even more intense… there is also the following common idiom

Literally, this means entirely and completely so it kind of super intensifies things. You can use that just like the regular gar and it is especially handy for those stand alone no-s… a single gar nicht would sound a bit truncated in that case.

So, intensifying a negative is one of the things the complete-idea of gar has brought us, but it is not the only one. There is another super common word. Sogar.

Sogar – and the many things it doesn’t mean

Back a few centuries ago… the words gar is still in common use as completely. Two princesses sit around swooning over Sir Loras, that cool knight they have heard so much about….

People used that way of intensifying a lot and so it fused and became one word – sogar. And then the original meaning changes, from so completely to even. So from today’s point of view the princess said the following.

I don’t really know why there was this change. Maybe people got so used to their dramatic sogar that someone one day said

And the people around him were like… “What?! Pepper from India, wine from Italy and so utterly potatoes? That don’t make no sense.”. But it sounded cool and so they kept using this to underline how special something is. I mean… so utterly smart and even smart... the both do have the idea of special in them. But anyway… the original meaning was soon forgotten and today sogar means even…

Now, the word even is used for many different things and has many different translations. Sogar only works for the even that is reaching for extremes so to speak. Like… you can reach the apples on that branch but if you really really stretch out your arm you can even reach the bigger ones on that branch further up. You reach far out to include extremes for extremes with sogar. And that’s all it does. It is not like even that means all kinds of things.
In fact, let’s look at one example where sogar doesn’t work… or at least not without changing the meaning of the sentence.

This can mean two things. One: you doubt that the other person has actually read it… and two: you think that reading the book is an extreme thing to do and the normal activity would be “put on shelf” or “look at the pictures”. The first one makes much more sense in this context and most people would understand it that way but the other one is possible too, at least in theory. And now guess what this sentence means.

Exactly, number two. It sounds genuinely impressed at how extreme and out there reading a book is. And that’s all sogar does – reaching for extremes. Okay… is it really all it does? Like.. really? Only that? The answer is … No. It doesn’t even do that properly :). It only works in positive sentences. As soon as you introduce a nicht sogar is going to leave . those two… they’re really awkward about each other. I don’t really know what happened, but not even is not sogar nicht it is nicht mal.

Ugh… German. Can’t you ever just use one word? Like.. what the translation is for something ALWAYS depends. Why must it always depend? Someone should tell the translations to grow up. On second thought though at least the stuff with sogar only working in the positive makes sense… we’ve said that sogar reaches for extremes, be they positive or negative. Add a not and there is no more reaching… there is just missing something, if that makes sen.. meh whatever… let’s just say not even is nicht mal.

All right… so much important uses of gar – gar nicht and sogar. Those are the ones you really need and those are the ones you’ll see every day.
There is one more usage that we could mention. It is a bit out of date but it is still around in books so you might come across it… it is gar that expresses surprise.

This question makes it sounds as if the speaker has hints that the other person read the book and the speakers finds that super surprising. The translation would be

but not with this undertone of “don’t lie to me.” but rather in genuine surprise and disbelieve.Okay perhaps that’s a bit confusing. Let me just use an example that is more obvious.

There is genuine surprise and disbelieve in this. And that’s why it is mostly used in these kind of questions. And that’s also the difference to sogar, which talks about extremes but considers them realistic… and it often has a notion of on top of that.
All right. And I think that’s it for today. This was our German Word of the Day gar. It is related to ready, and it once meant ready but it got out of fashion and now it only means ready in sense of cooked. The idea of completion however, that is in the word, is part of two very important uses. Gar to intensify a negative and the word sogar, that means even in sense of reaching out for the extreme.

If you want to check how much you remember just take the little quiz we have prepared for you.
And if you have any questions or suggestion or sogar complaints, just leave me a comment.
I hope you liked it and see you next time.

By the way, here’s a little riddle for you… which word can you build from the three letters of gar, that is a synonym for very? If you get it right you have the chance to win an exclusive meet and great with Justin Bieber.

This entry was posted in Must have words, Small Words, Vocabulary. Bookmark the permalink.
Subscribe
90 Comments
Newest
Oldest
Inline Feedbacks
View all comments