Word of the Day – “ungefähr”

A quick look at the meaning of "ungefähr" and what estimates have to do with danger and driving. 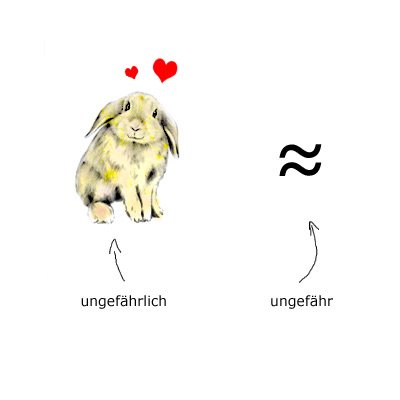 and welcome to our German Word of the Day. This time with a quick look at the meaning of

And if you’ve been learning German for a while a part of you might have immediately sounded the prefix alert and been like
“Hmmm… that looks a LOT like gefähr with an un-prefix. So ungefähr just gotta be the opposite of gefähr.”

But is that really what’s going on?
Let’s take a look :).

So, the word gefähr by itself doesn’t exist, but it is awfully similar to noun die Gefahr.  Which is the German word for danger.
Which by itself is also awfully similar to gefahren, which is the ge-form of the verb fahren, the German word for to drive.
Intuitively, that connection kind of makes sense. Driving can be dangerous and travelling, the older meaning of fahren, used to be fairly dangerous as well back in the day. And indeed, the two words fahren and Gefahr come from one origin – the super hyper mega unrealistically ancient Indo-European root *per. Those of you who have read my article on the ver-prefix might know it – the core idea of that root was a sense of venturing out, going forth and it might be one of the craziest roots out there. There are sooo many words based on that core idea in some way.
Anyway, fahren and English fare capture on the aspect of travelling. Gefahr on the other hand came from a branch that was about taking risk. That’s also where fear is from by the way. Gefahr and fear are pretty much brothers. Like… you could think of Gefahr as “gives fear” if you need a trick to remember it.

… and the related words do get an umlaut…

And now we get back to ungefähr and I mean…. come on… that just has to be related. Ungefährlich is “non-dangerous”, so maybe ungefähr is variation of that. Yeah, a variation. Like… it carries an idea of non-threatening and in this example…

… it basically expresses that one hour is not that big a problem. That’s got to be it right? RIGHT?
Well…

The actual meaning of ungefähr is (round) about, roughly or more generally, a sense of estimate.

But the idea of non-threatening is actually in there somewhere. Back a few centuries, ungefähr indeed was two words “ohne Gefahr” so it meant without danger. But then merchants and scholars and lawyers started adding that as a sort of disclaimer to statements that were estimates or approxomations and the idea was to kind of make it clear that a possible error was not with evil intent. Like… it was to avoid misunderstandings.

Basically, it was a way to avoid misunderstandings. Parallel to saying “No offense meant.” or even better… waving at someone. That most likely came from people showing each other that they’re holding no weapons.
Anyway, so  at first ungefähr was a disclaimer that you might have made a mistake and didn’t mean no harm, but soon it was very popular and took on the general sense of approximation and the connection to Gefahr got lost completely. I’m pretty sure 80% or even 90% of Germans have never even noticed the similarities. Like… if you have German friends and you want to make their brain hurt a little just ask them what ungefähr and ungefährlich have to do with each other.
You’re in for a serious round of “Äh… ähm… ähhhhh.”.
Anyway, here are some more examples.

As you can see, it’s pretty broadly used and doesn’t always directly translate to round about or roughly. And that’s kind of also the main difference to the other possible translations circa and rund. Both pretty much only work in front of numbers, and rund doesn’t even work for times.

Oh and I almost forgot… there’s also in etwa which is somewhere between circa and ungefähr.

But overall, unbedingt is definitely the most common word and you sooo have t… oh wait… I… I mean ungefähr of course. Unbedingt is for another time.
So that’s it for today :). This was our little look at the meaning and the origin of ungefähr. Yes, it does relate to Gefahr, but the connection is really obscure and you need mind yoga level 10 to get it. Which means, if you understood the article, you have just unlocked mind yoga level 10 :). Hooray.
As usual, if you want to check how much you remember, you can take the little quiz I have prepared for you.
And of course, if you have any questions or suggestions just leave me a comment.
I hope you liked it and see you next time.