A fun look at the various meanings of "aufnehmen" and what a recording has to do with giving asylum to refugees and entry exams. 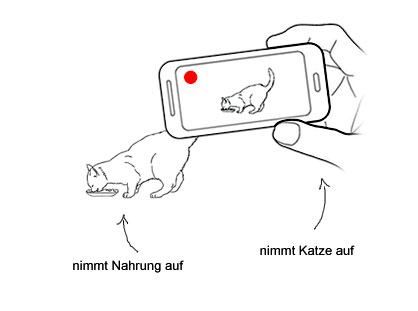 and welcome back to the never ending story of German Prefix Verbs. Today, we’ll have a look at… what is going on, my voice looks really weird… like a little girl…. … gotta check the mic-settings … uh… mic check one two eins zwei.. nah, even worse test test… test test testDaF testicle l teenage mutant ninja testudo … perfect.
I’m just gonna start the recording again… what? … oh, right, I forgot we’re live.
I thought we were recording.
But hey, that actually brings us right to the prefix verb we’ll look at today.

Because recording is one of the contexts it is used for. One of many, womany contexts…

Seriously, aufnehmen seems to be quite confusing for many learners. And it’s no wonder either, because the list of translation you get when you look it up online is longer than my toe nail.
MUCH longer!!
But when you look closer you’ll find that aufnehmen is actually pretty coherent because all the many meaning revolve around one core idea:

picking up, taking in something that is out there

Which is also pretty much the literal translation of aufnehmen.
So let’s just go over the various contexts and see how the idea is used.

We already mentioned aufnehmen in sense of to record. Just like in English, where you also say that a mic pics up sound. Only that aufnehmen the standard word. And in fact it’s not limited to audio and video but also works for photos.

By the way, did you know that the word record is related to the word cardio and originally meant something like learn by heart ? I was pretty surprised to find that.
Anyway, from recording something on a tape it’s really not that far to recording something in your brain. Which is also a context where you can find aufnehmen.

And it makes perfect sense to broaden that idea t for nutrients and other things the body can take in.

And if it works for an actual body, why not also use it for all kinds of abstract embodiment like countries, corporations or the like.

Moving in to a new apartment or country is the start of something. And this notion of starting is also part of the scope of aufnehmen.

So… these were the most important contexts of aufnehmen and I hope you could see the basic idea of picking up in all of them.
Now, just to make sure though… aufnehmen is NOT a translation for to pick up. At least not in general. Aufnehmen sounds somewhat slow and sustainable and it doesn’t work for quick pick ups like that girl in that bar the other night… uh… I mean … the waitress … picking up glasses. That’s … what I meant.
Anyways, the noun for aufnehmen is die Aufnahme and it is just as broad as the verb is.

And boom, there you have it.
That’s aufnehmen in all its breadth and beauty. No mind yoga, everything makes sense. Kind of lame for a prefix verb, right?
Of course, those weren’t all the uses but I’m sure you can figure out any aufnehmen or Aufnahmeyou’ll see from context.
Well, except this one, maybe.

This phrasing, es aufnehmen mit, doesn’t really fit in with the others. The idea is that of taking on, challenging someone or something,being a veritable challenge. English actually has a verbatim translation to take it up with but I’m not sure if they’re really the same. At least, it’s not always a fitting translation.

Cool.
Now, there’s one more thing we need to look at and all the prefix verb veterans know exactly what I’m talking about… the r-version.

There are no surprises here. As usual, the r-version is a super straight forward, location-focused take on the combination of prefix and verb and raufnehmensimply means to take upwardor to take on.

Yeah… obviously, I was kind of struggling to find good examples :). Raufnehmen is just not that common.
But the verb aufnehmen itself is super useful and you definitely need to aufnehmen it into your active vocabulary.
And that’s it for today. As always, if you have any questions and suggestions just leave me a comment.
I hope you liked it and see you next time.