Word of the Day – “treffen” 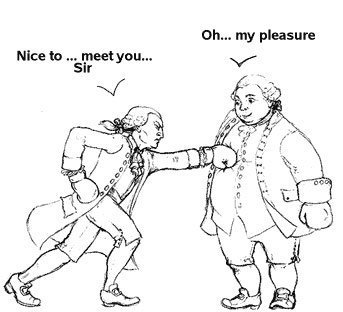 and welcome to our German Word of the Day. This time we will have a close look at the meaning of:

Treffen is a word many people encounter at some point, even if they do not intend to learn German.
Meet Steve:

With Covid behind us (for the most part) , teve is traveling from London Gatwick to Berlin Schönefeld with Easyjet, the airline where the price and the carry-on are equal in pounds… yes… they are THAT cheap. On the flight, Steve is refreshing  himself with an  ice-cold Coca Cola while enjoying Justice League 2 – The Return of the Clusterf*** on his 8kHD one-digit-inch IPad, from Apple (thanks for the paycheck). Steve is heading to Berlin to see nice things and drink stuff.
The best place for that, so Steve was told, is a bar so there he goes and meets a German girl. As I said, he does not speak her native tongue. Yet he is very interested in it… … (badumm tish) … Hoping that his English accent will get him access, Steve decides to make an essay to express his delight about that contemporary acquaintance of his…  in German.
Dictionary to the rescue!!!

But just as a dictionary brought my last sentence to the brink of nonsense, it gives less than perfect advice to Steve:

That is the literal translation of

That is, while totally understandable and ok, NOT the right thing to say… If you meet someone for the first time, the best verb in German is kennenlernen… literally this is learning to know, less literally it would be getting to know, not literally it is meeting for the first time and illiterately it would be hjaugebtcniaun … ok … that last one was kind of mean I guess. I am being a bit stupid today… please indulge me :).
So…. the phrasing Steve was looking for is:

And that concludes this completely off-topic introduction and we will continue straight with act 2.

Act 2 is usually the time in a drama when the well established hero encounters an obstacle to overcome. Sadly, act 1 didn’t establish our protagonist at all, so we have to squeeze that in here the best we can. Who is our main character anyway, you ask? Well it is and has always been the word treffen :)…
Treffen is not a hard word. Sure… it does have to main meanings to meet and to hit but they can easily be thought of as one and the same underlying idea. Not so easy you say? Well one needs to think German to learn German so let’s take a negative outlook on things…

This can either mean that I did not meet him or that I did not hit him. So it seems like to miss is the opposite of either of the 2 verbs, to meet and to hit, and hence they are the same… or at least close enough :).
Let’s do some examples.

The context will make it clear, which treffen is intended. However, a statement like this will raise questions:

Still people would assume it is to meet as the other option is just too serious for small talk. Anyway… treffen leaves ample opportunity for word play. Just imagine if there were only one word in English.

So, what’s with the conflict treffen has to face? It is looming, don’t you worry, for soon, treffen will be confronted with one of the most viscous villains in language…
but first let’s have a look at a more abstract use of the word treffen or the part that means to hit to be precise. In German, you do not need a physical object to hit someone… you can also do it with an insult or with disrespectful behavior. Also events can hit someone in a more abstract sense. In those cases the English translations would be to hurt or maybe  to get to someone.

So whenever you read something that doesn’t really make perfect sense as to hit or to meet, maybe the main point is the injury or impact caused by the hit, that matters in that case.

And now we are ready for the big reveal… and actually treffen does not only have to deal with one super villain… it has to deal with 3 of them at the same time: grammar, structure and cases. GOD DAMN.

The following things only apply for the meeting-treffen. I am sure some of you have been wondering about the differences between the possible phrasings with treffen. There are basically 3.

Let’s do one more group.

So… what is the difference between just treffen and the reflexive sich treffen mit? Well… the essence of the 2 is the same. All 3 sentences in the examples above do convey the same information. But there is a difference in use. I would say, that in everyday speech sich treffen mit is WAY MORE USED. A possible reason is to avoid confusion with the hitting-treffen.

As I’ve said before, context would indicate that he meets his professor but the sentence does not make it 100% clear. The reflexive phrasing does.

Translating this with to hit leads to the really stupid:

So… sich treffen mit can only mean to meet and is thus more clear. Apart from that it does have a strong notion a planned event and all people were actively involved. If I treffe mich mit someone, we have agreed on that before. It was on purpose. If i just run into someone, that would be just treffen.

So just treffen has a notion of “by chance” to it, while sich treffen mit is definitely always planned.
By the way… in German newspapers and radio news they sometimes avoid to use sich treffen mit. They replace it by the rather odd zusammenkommen mit.

I don’t really know why they do that. Maybe sich treffen is a bit too casual but … zusammenkommen is a really stupid word. Write it as 2 words and you get what couples try to achieve when having sex.

Anyway… so a rough guideline could be this

This is not super strict though. So some people might use just treffen also for planned meetings so that is not a fixed rule. But sich treffen mit is definitely on purpose.
Now,  what about the third version we had.

Why is there this weird uns there? Let’s see.
If you use treffen, you ALWAYS have to have an object. You cannot just hit or meet without an object or person. This is different to English.

is not. We have to say what we treffen… either something, someone or ourselves.

As you can see, the uns of the last example is NOT translated. It is just their in German because grammar wants it. But it always wants it… also in questions.

The uns has to be there. Without it the phrase sounds really odd to a German. What??? What can we hit???
So to wrap this up let’s do one of those  constructions, that make German seem so difficult.

We are almost done for today. But I still want to tell you some other situations where you encounter the word treffen.
The first things is this: for some reason, decisions are hit rather than made in German.

I don’t really know why that is, but it is a very very common phrasing and you should know it.
Vice versa there is one thing that is met in English but not getroffen in German… expectations and all related things, like specifications or demands. The German word for this version of to meet depends on the thing met, but erfüllen (fulfill) is probably a good choice most of the time.

And lastly here are some words that are based of treffen. Das Treffen is the German version for meeting, though especially in a business context the word meeting is much more common.
And then we have the noun der Treffer. Adding -er to a verb usually makes it the person doing the verb, like Fahrer (the driver) or Käufer (the buyer). For treffen it is different. Der Treffer is not the Person but the hit or in sports the goal/basket.

Of course, there are a few more but I think you can get them from context.
So… I think that’s it. This was our word of the Day treffen. It can mean to hit and to meet and it has a slightly annoying grammar when it means to meet, but it is nothing too bad after all.
If you have any questions or suggestions, just leave me a comment. I hope you liked it and see you  next time.

Aftermath: The German girl did think Steve had a cute accent… … … Steve is going to be here quite often.