Word of the Day – “die Schuld”

A fun look at the meaning of "die Schuld" and its family, a nice theory why Germans don’t like having debt and a super surprising connection to English. #OMG 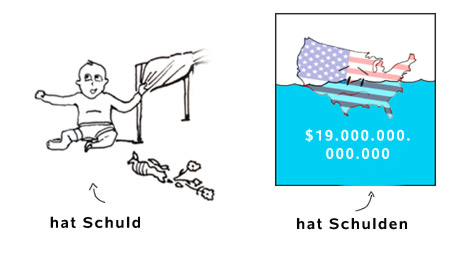 and I’m sure most of you have seen that before as part of the words Entschuldigung and entschuldigen which are the German counterparts for the common English words to unguiltify and deguiltification.
Now you’re like “Those aren’t even real words” and of course you’re right. Those are more like the literal translations of Entschuldigung and entschuldigen because the main meaning of Schuld is guilt.
German uses that idea in quite a range of words that have surprisingly diverse translations in English. Today, we’ll take a look at all of those, we’ll see how to use entschuldigen correctly, and we’ll find out why Germans are not that much into credit cards.
Seriously… if you want to go to bars and pubs make sure you have cash.
So, are you ready to dive in? Cool.

I just said it, Schuld means guilt. But it would actually be more accurate to say the core idea is guilt. Sure, Schuld can translate to guilt directly.

But in every day life Germans use Schuldwhere English uses fault or blame.

All these examples revolve around the idea of who is guilty. The two languages come from different angles. And it’s the same with the words that are related to die Schuld. The translations rarely have the word guilt in it because English uses a variety of words but the idea of guilt is always kind of there.

Unschuld for virginity… that’s actually a really weird phrasing when you think about it. Someone who hurts or kills someone has lost their Unschuld. Not someone who freaking humps for the first time.

“I had my first time last night and it was amazing.”
“Good for you, now you’re guilty forever.”

Hmmm… who would wanna put such a negative spin on something that should be enjoyed. Sounds like something religions would do.

Anyway, let’s get to the most important related word and that is, of course,

Entschuldigen,literally “to unguiltify”, means to excuse, to apologize. And grammatically it (mostly) works like to excuse in that it needs an object. You can’t just excuse the way you can apologize.

This is correct. But these are not:

So when you want to use it in the sense of to apologize – and you do have to do that because German only has this one word for it – then you need to put in one of those self references.

Here are some more examples.

The noun for entschuldigen is die Entschuldigung and that can be an excuse in a more official sense as well as a heart felt apology. But it always has a genuine tone to it. For a feeble, petty excuse you’d use the word die Ausrede (link below) .

The verb entschuldigen can also be used to approach strangers BUT then you NEED to add the formal you.

Without the Sie it sounds pretty wrong. As does entschuldigen used as a one word excuse.

One might think that -gung and -gen sounds similar but no, not to a native speaker’s ear. Entschuldigenas a stand alone is understandable … but it sounds really really bad, so you try to not mix them up.
Cool.
So, this was the whole guilt aspect of Schuld. Now let’s get to the other aspect.
Wait, there’s another one?
Yes, and it has to do with money.

And this fact, the fact that Germans use the same word for debt that they use for guilt might be the reason why Germans are somewhat restrained when it comes to borrowing money. Sure, lots of people are in debt for some reason or another but generally, it is much less normal than in the US and “Schulden haben” (being in debt) has a very negative ring to it in German. Like… when I hear

my natural reaction is to think

“Aw… poor Thomas. I hope I never get into that situation.”

I don’t hear the opportunity that debt can offer. Schulden sounds bad. So why did the Germans start using this negative word for debt? The answer is, they didn’t. It’s the word that changed.
Because some two thousand years Schuld was simply about a sort of obligation that you had toward someone. Like…bringing the smith a boar because he fixed your ax or giving the chieftain a barrel of ale because he won the last drinking competition. We could say a Schuld was something that you should do for someone. And if you’re now like “Hmmm, shouldand Schuld look really similar and they’re both about obligation… can that really be a coincidence”, then you’re on the right track. Schuld is directly related to should. And that is especially visible when you look at the verb schulden, which is the German word for to owe.

I don’t know… “You should me 10 Euro” … it’s like sooo obvious once you know it. Really a pretty cool connection.
Anyway, so the original Schuld was just about obligation toward someone, be it financially or otherwise. And this notion of having done something wrong, being guilty came in later. I don’t know… I feel like religion might have had something to do with it. Religion always had a tendency toward guilt tripping people with their obligations toward the Lord.
Anyways, here’s a couple more examples for schuld words with the sense of owing.

And one last thing about to owe maybe… we’ve learned that Schuld and schulden has a slightly negative tone. So when people want to use owe in a positive way, for stuff you don’t have to pay back, they’d use verdanken.

And I think that’s it. This was our look at the word die Schuld and the schuldfamily, which is either about owing or about guilt.
As always, if you have any questions about all of this (I feel like it was actually quite a bit to digest) just leave me a comment.
I hope you liked it and see you next time.

One bit of random trivia:

The word sinmight be related to the German sein as in to be. It’s not certain and there are other theories but that’s kind of deep :).

By the way… I have an intern now… no … really. A real intern. Her
name is Dakota and she is based in Munich, working in a beer garden,
so I can’t send her to fetch me coffee, which is a pity, but I’ll make sure
I bitch at her for no reason every chance I get. Because that’s what
internships are, right?
She made the great drawing this time and also she created an awesome
Anki vocabulary deck for this lecture. More to come in the future…
** ANKI Vocabulary Deck of about the stuff in this post**
** all audio files for download (zip file)**

Word of the Day – “die Ausrede”

schulden – to owe
jemandem etwas schuldig sein – owe someone something

This entry was posted in A-Level, Must have words, Nouns. Bookmark the permalink.
Subscribe
39 Comments
Oldest
Newest
Inline Feedbacks
View all comments