The meaning and use of “(sich) fühlen”

"fühlen" means "to feel". But there's also "sich fühlen" and "sich anfühlen" and all three have distinct meanings. Today, we'll learn how to use them properly. 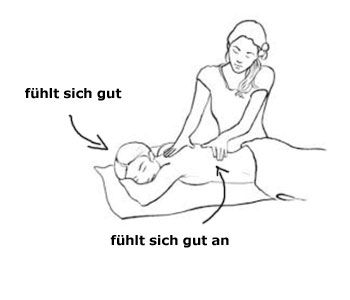 and welcome to our German Word of the Day. This time, we’ll take a closer look at

It’s not a big reveal that fühlen is to feel.
The problem is that you can’t just translate them one to one and mistakes with fühlen are actually super common. I mean, in a grammatical sense.
Here’s the thing: there are three somewhat distinct uses for the English to feel. The first one is talking about what we feel (perceiving something), then there’s the one about how we feel (perceiving ourselves)  and last but not least the one that’s about how something feels (something is perceived).
Here’s an example for each one:

Let’s start with the bare version.

Fühlen just by itself is the counterpart of the first use of to feel: feeling something. The “what”.
It doesn’t really matter what that something is. It can be something external like heat or wind but it can also something internal like anger or compassion. Or even just an “idea” or fart… er… I mean fact.

Simple enough right? But there’s a catch!
No, not some crazy grammar twist. The thing with this use of fühlen is simply that it’s usually not very idiomatic.
As if the three different fühlen-phrasings weren’t enough, German also has spüren, which is ALSO to feel. Yeah… I can sense your frustration :).
Spüren is the more primal, raw, direct side of to feel. Kind of like to sense, only that sensing sounds more like a Zen master while spüren sounds like a hunter… no idea if that makes sense.
Anyway, we’ll talk about spüren in detail some other time so we won’t go into detail now. But at least to my ears spüren would sound better in all the examples that we just had (German native speakers please don’t hesitate to call me out if you disagree :).
Bottom line is: the stand-alone fühlen is only used in the sense of what we feel. And because spüren is usually the more idiomatic pick for that idea the stand-alone fühlen is kind of… not so useful.
That changes completely once we add a self reference.

Self references are annoying, but this one kind of makes sense. You might have guessed. Sich fühlen is what you need if you want to talk about HOW you feel.

That’s the core phrasing and insert anything from just a word to a full phrase.

Oh boy, these examples.
Anyway, this last phrasing, the “I feel like” is  interesting because it can actually express two things about you. Look at these two examples:

The first one is a comparison, the second one on the other hand is expressing that you WANT soup. And as usual, English doesn’t bother making a distinction.  “No time! Captain Context will take care of it.”
German on the other hand, well, you know how German is with this stuff…  “Oh Gooood. Oh gaaaawwwwd. Two ideas. TWO!!  I need to make that explicit. I need to mark that.”
And so we have two different prepositions. Wie is for comparisons and nach is for wants.

Now, soup is a thing, an entity. But we can also want “activities”.

And at least the veteran learners among you will have an inkling that we can’t just use nach here. We need the da-word danach.

The good news is,  you don’t really need to use this complicated phrasing. Because for the idea of wanting,  Lust haben or Bock haben are the more common options anyway.

And while we’re at exceptions… to feel about, the idea of opinion,  would be translated using denken. Fühlen wouldn’t make any sense here.

So this is how you talk about HOW you feel; you use fühlen with a self reference.  And just in case you’re wondering: unfortunately it does sound pretty wrong and confusing to a native speaker if the self reference is missing.

This looks like “I feel good” but it sounds like you’re grading your sensual perception. Like… “I can’t see very well, but I feel well.” Damn it, I can’t even demonstrate in English. I hope you understand what I mean.
But yeah, the self reference is really important and you have to have to get used to it.
And I have just the song for you. “Ich fühl mich wohl” is essentially the same as and this catchy tune will not only make the pattern feel familiar, it’ll also make you feel better. And give you the latest dance moves, Cam Newton is using. Dabbing is so last season ;)

Wohooo.
So now all our cells are happy, let’s make face the harsh reality by moving on  move on to the last fühlen-phrasing, the one with the prefix.  And if you’re now like “Wohoo, no more self reference.” then I have news for you. The self reference stays. It’s a prefix AND a self reference.
Man, it must feel awful to learn German sometimes :)

And if you paid attention in the beginning, then you already know what this is about (don’t worry if you don’t… no one pays attention in beginnings). Sich anfühlen is the construction you need when you want to talk about how something feels. Like… how it will be perceived by someone who can actually feel.

Why the self reference and why  an ?  Well, we could say that an comes from the idea that something is touched and sich refers back to what is perceived but honestly, just take the phrasing for what it is…  an overcomplicated mess that’ll give you a headache.
Let’s just look at some examples to get a feel for it.

Now, how wrong would it be to forget the an for example? Well, it would be quite confusing. Here’s an example:

The first one is how you would understand the English sentence. The second one sounds like the shirt is sentient and it currently feels like it is a bath of warm milk. And shirts from unicorn wool actually ARE sentient so this is suuuuper confusing!!!! My gaaaaawd.
Okay seriously though – English relies on context and it works perfectly well, but you gotta to admit that the following two sentences express quite different things.

These two sentence are NOT the same thing. Yes, the context makes it clear but German are not used to referring to context here. Each of the fühlen-phrasings has a pretty clear cut meaning to them and if one is used out of place, then that sounds really really really.
Yeah… kind of like that ;).
All right.

Now, there’s one little puzzle piece that we need to complete our picture: the noun das Gefühl.

There are some more cool compounds with it like Mitgefühl (compassion) or the famous Sprachgefühl, but what matters for us today is the fact that das Gefühl is used to translate one particular use of the English verb to feel. Which one?
The one that talks about you having an inkling. Like… you feel like something is the case but you’re not quite sure yet. And instead of using one of the phrasings with fühlen, you would say das Gefühl haben.

Cool.
So now that we have all we need to properly translate to feel in German, it is time for … a coffee.
Lean back, sip coffee, gaze out the window for a bit. Or chat with a colleague if you’re at work. Just relax and forget about all that complicated German stuff.
And then come back here… for a little exercise.
Yeaaaay.

First, a quick overview over what you need:

Expresses “what you feel”. This is the one you’ll need the least because usually spüren is more idiomatic for these contexts.

Talks about “how you feel”.
If you want to say that you feel like doing something then Lust haben or Bock haben are more idiomatic.
If you talk about that you have an inkling of something you’d use “das Gefühl haben”.
And if you talk about opinion (feel about), then go with denken.

Talks about “how something feels” in the sense of “which sensations does it evoke”.
The solutions are at the end of the quizz and also, I’ll show them as audio.
Viel Spaß :)

And? How’d you do?  Was it easy, or did you have to think a lot? Let me know in the comments how you did or if some of them are unclear.
Oh, and don’t worry if you made mistakes. That’s normal, my exercises are usually not exactly empowering :).
Anyway, so that’s it for today and I think you’ll now make less mistakes with fühlen. There still are some uses of to feel that I didn’t talk about, so if there’s a use you’re not sure how to translate, let me know in the comments. And that goes for all other questions, too, of course.
Except my weight. That ain’t nobody’s business.
I’m out for today. Hope you enjoyed it and see you next time.
And don’t forget…