Word of the Day – “versprechen”

"versprechen" has maybe the most ironic double meaning ever. Today, we'll find out what it means and how those two connect. 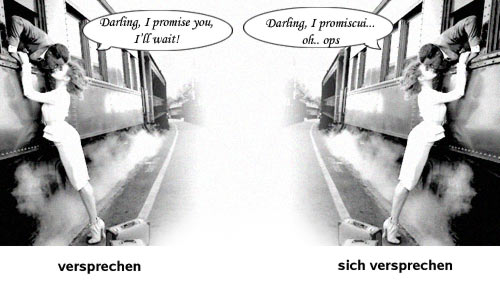 And I am glad that we already have a call here because that gives me the chance to sprechen to someone right away… Charles from Edinburgh, how are you today?
„Hello Emanuel, I’m fine thank you…“
What can I do for you Charles?
„Don’t get me wrong, this show is really great and I do enjoy it most of the time… but I have to admit that I’d be lying if I said that today’s word sounds particularly intriguing.“
Uh… what do you mean exactly?
„Well… the thing is… I think most of us know what it means.“
Ooooohhhhhhhh… do you?
„Yes, I think we do…“
Oh, very well then, if you know so much it certainly ain’t nooooooo problem for you to translate THIS:

„As a matter of fact, it ”ain’t” no problem indeed. I said it a lot when I was in Hamburg. I means: I don’t speak German very well.“
… (muffled) I bet you don’t…
„Hey I heard that, no reason to be mean.“
I know I apologize… it’s just… what am I going to do now? Just pick a different word? All my research and preparation would be for nothing…
„You could just slap a prefix at it, maybe…“
Hey, that is actually not a bad idea… let me think… how about ver?
“Sounds good….”
Cool….so… err… ladies and gentlemen, our Word of the Day

We’ve already established that sprechen means to speak. It can also mean to talk at times but it is not worth it to look at the differences there. As always there are all kinds of words that come from the verb like for example die Sprache (the language), das Sprichwort(the idiom) or der Spruch (the saying).

But now let’s get to versprechen. Which has the following two meanings: to promiseand to make a slip of the tongue or to misspeak. Hmmm… that’s quite some irony in that :).
Now, if you’ve read my article on the prefix ver-you might remember that ver- actually carries four different ideas, and versprechen is a good example for a word where two meanings coexist.
So let’s look at them one by one.

This is really a straight forward translation. The overlap in meaning is as large as can be and the grammatical structure for both words identical, too.

Now, of course you can also make a promise to yourself.

And what’s interesting about this phrasing is can have a second meaning. Not entirely different, I mean. But erm… noteworthily different… gee, is that even a word?!
Anyway, when you make a promise you’re essentially raising hope or expectations. This view helps to understand the second notion of self-promises.

The structure for this versprechen… the expecting-one if you will… is always involving a mir, dir or sich and a von.
Cool.
Now, as for related words we have das Versprechen which is the promise.

As you can see, promises are given rather than made in German. But I’d say we prefer to use the verb most of the time anyway.

Another word worth knowing in German is promising. But just promising is not enough. Germans are apparently hard to impress so something promising has to be promising a lotin German to be promising… wait, without my mind-map this doesn’t make much sense… anyways, the example shall clarify.

If you just said versprechendin such a context people wouldn’t even understand what you mean.
Alright … oh and just for completion here is an example with promised.

Now, how does verchange to speak into to promise?
Well, that makes perfect sense as soon as you know that one of the ideas ver- carries is… for. Which is an essential part of a promise… it’s my “speaking” for you. And ver-also carries a notion of finishing, completing which gives the whole thing a slight notion of contract.
Not sure, if that makes sense.
Anyway, let’s move on to the other versprechen I promised.

And here, we see yet another idea of verin action. And this one is rather clear cut… it basically adds the notion of wrong. Sprechen is to speak so versprechen is to speak wrong. And that is very close to the actual meaning to make a slip of the tongue.

You might have noticed in the examples, that this versprechen is self referential. I can’t really tell you why it is that way but without the self reference it will sound like the other versprechen. Or just plain wrong, like in this example.

So the self reference is crucial.

Now, you might remember the abstract meaning of the first versprechen… the one that was kind of like to expect. This was self referential, too but there, we the self reference is an indirect object... to myself. The tongue slip one is using a direct object. Can we mess around with this? Sure.

Okay, technically it could also mean that I promise myself to not promise myself (to someone) anymore. So there, we’d need Cpt. Context to clear it up. Anyways, these situations are rather rare and to be honest, the tongue slip versprechen is not a word you would need everyday. It is just good to know, that the meaning exists.

So… I think we’re pretty much done here. This was our German Word of the Day versprechen. It can mean to promise and, if the promise is made to oneself, it can also mean to expect or to hope. The other, less important meaning is to make a slip of the tongue. Each meaning is a good representative for one of the concepts that ver can add to a verb… one being something like for realor for good and the other being wrong.
If you have any questions or suggestions just leave me a comment.
I hope you liked it and see you next thyme… I mean time ;)