The meaning of “nachdenken”

A quick look at the meaning of "nachdenken", the difference to just "denken" and how to use this verb in everyday German. 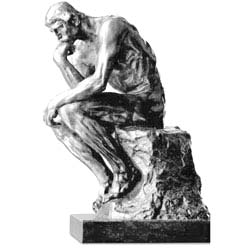 and welcome to our German Word of the Day. This time, with a look a close look at the meanings and mechanics of the great word :

And in this case a picture really says more than a thousand words. Because nachdenken is exactly what this Rodin statue called “The Puncher” does:

to punch oneself in the face.

Nah, kidding… nachdenken is of course about thinking. Although too much of it can be a bit like punching yourself.

Now, most of you know that denken means to think, but nach is a little more confusing. When you look in a dictionary, you can find that it can translate to to, after, for, according to and past. That’s quite… broad.
But there’s actually a core theme to nach that’s kind of inside all these translations.

And that is the idea of pursuit. We’ve actually talked about nach in detail in a separate article, though, so I’ll leave you the link below.
For today, the idea of pursuit is actually pretty perfect. Because nachdenken is about the act of actively pursuing a thought, or train of thought.
One possible translation is to ponder, but nachdenken doesn’t sound anywhere near as lofty or epic. It’s really an everyday word.

So let’s look at a little more at how denken and nachdenken are used in daily life, to get a feel for the difference.
Denken is first of all used for the general act of thinking. So this is kind of what humans can do while animals can not. As René Go-Cart said…

Denken is also used in sense of having an opinion or an idea:

And then, German  denken an is also very often used in the sense of to remember something.

Nachdenken on the other hand is as we said the pursuit of a thought. In more practical terms, it is thinking about one certain question, in order to find a solution.
Suppose it is Friday night and your best friends ask you if you want go to the bar with them. Naturally this is a tough call and it sure is not something you could decide immediately as you also have lots of German to study, the kitchen sink is filled with sponge-hungry dishes and there’s also this Corona thing… or is that even a thing still?
Anyway, so in that scenario, you might answer by saying:

Technically, what you do is “ponder” the question, but pondering sounds just too epic or lofty. Nachdenken however is perfect. A
Here’s a couple more examples:

And just to make sure… the word denken alone does NOT not work here. Denken über is only used in the sense of opinion.

But nachdenken doesn’t always have to be think about. It’s also used for to think in the sense of trying to recall something.
Like… you have put your car key somewhere but you don’t know where. You sit in class and the teacher has asked you something you should know. The thinking you need to do in these situations is also nachdenken and not just plain denken.

And actually, it doesn’t always have to be one specific question. It can also be loosely following a train of thoughts.
So if someone asks you what you have done the last 2 hours it is totally fine to say:

People might ask, what you were thinking about but you don’t have to say it. And in case your partner is German, you can also use that phrase to give them a real good scare. Just put on a serious face, use a neutral voice and slowly say:


Because that sounds a little bit like “I… we need to talk.”.
Cool, so there you have it. That’s nachdenken. There’s also the adjective nachdenklich, but I think you can find what this means if you nachdenken for a second :).
Nachdenken is definitely a must have and you should start using it.
If you want to recap and check if you got the most important points then you can take the quiz I have prepared.
And of course, if you have any questions or suggestions, just leave me a comment. I hope you enjoyed it and see you next time.