'Je ... desto' is the German version of English 'the... the'. We'll look at how to use it with lots of audio examples. 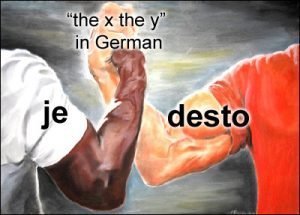 Suppose you want to express how some ‘quantity’ depends on some other ‘quantity’. In English, there is one word that will do the job for you…  the .

Je is kind of a weird, hard to define word. It’s part of words like jemand (somebody),  jeder (everybody) or Jesus (good hearted dude) and it can also stand alone. Then, it can mean ‘a‘ in sense of ‘per’  or ever, in the context of at one point.

Think of it as just a general pointer. Don’t think about it at all. It doesn’t really matter all that much :).
Now, desto by itself does not have a meaning, so that one, you will only see it in combination with je to express the the-the-relation. I just bit my tongue, by the way :)
And now it’s time for examples.

Both words, je and desto can actually be replaced by the word umso.

What doesn’t really work is the combination  umso… desto. Don’t ask me why but it just sounds wrong to me.
I would recommend staying away from umso anyway. First of all, it’s not all that common to begin with, and second of all, you will very likely pronounce it quite similar to um zu, which means ‘in order to’. That’ll make it really hard for a native speaker to understand what you’re trying to say. So stick with our tag-team je… desto. It’s what people use the most anyway.

Now, originally, the article ended right here. But in the comments, two questions have been coming up that are kind of sort of important. So I decided to address them here.
Still, you should read the comments. They’re awesome!
Anyway, so the first thing I want to add is about structure.

Je is like dass or weil in that it kicks the verb from its comfy position two and makes it go all the way to the end.

This is a normal statement, and with je it turns into this:

And what about desto? Well, it’s better to look at the entire je… desto...-structure as one block. So the verb has to come right after it.

This is a normal sentence. And now we add our je desto and it becomes this

Basically, we moved wenig Sinn into position one and then added a comparison to it. The crucial point is that after the entire je…desto-phrase comes the verb.
So, that’s what we need to know about word order.
And now for the other big question that came up in the comments – the cases.

If you’ve got a few months of German under your belt, you probably know that sometimes the case you need to use depends on a preposition. So it’s no wonder that people asked which case comes after je… desto.
The answer is… every case :). Not at the same time, of course. That would be case-ception.
What I mean is that je and desto don’t care about cases because they’re not prepositions. The case entirely depends on the function of the element in the sentence.

Not sure, if that second one is proper English, but I hope you can see that je desto really have no influence on the case.
Cool.
So that’s it for today. This was our look at the very very hyper useful combination je… desto... and you definitely should learn and use it.
If you want to see if you remember the main takeaways, just take the little quiz I have prepared for you.
And if you have any questions about any of this just leave me a comment.
Hope you enjoyed it and see you next time.