A fun look at the German verb "trauen", the difference to "sich trauen" and what confidence has to do with marriage and fidelity. #datingadvice #kidding 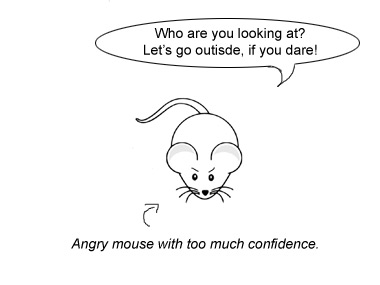 and welcome to our German Word of the Day. And if you’re a Sissy you should leave right now. Because the word we’ll talk about this is incredibly scary. Behold…

Hmm… actually, it kind of looks sad. Hey, but do you know what looks sad AND scary?
Marriage.
Ohhhhhhhh, Emanuel is an unromantic millennial.
But no, first of, I am a Prellenial. We’re just as woke, but more diligent and sexier.
And then, I am super romantic. Just check out what I made for my shorty this morning, before she went for her morning dump (click here if you dare) .
Anyway, let’s jump right into the article. That’ll explain a lot. Maybe even this intro :)…

So yeah… trauen certainly does look like it is related to traurig, which means sad. But that’s a coincidence.
Traurig probably comes from the ancient Indo-European root *dhreu which was about falling and which also the origin of drip and drop. Just think of dripping tears or the head dropping.
Trauen on the other is related to the English words true and truth and the German word treu.  Now you might think that trauen is something about being right. But there’s actually quite some room for confusion.
The main idea of true nowadays is “not false”.  German uses the family of wahr for that.

Treu is only true in the sense of being faithful, loyal and that is actually pretty much the meaning of original Germanic word *treuwaz.

Wait, “a little faithful”? That sounds complicated. They will have to talk about trust, I guess.
And so will we. Because trust is also a member of this family… uh… hold on, I gotta do something…  *Emanuel, pats himself on the back for the transition… that makes perfect sense; we do trust people that are truthful and loyal.  And to trust is the meaning of the German verb vertrauen.
Wait, vertrauen? Why not just trauen?
Well, trauen used to mean to trust and vertrauen, with the for-idea of ver, was just a slightly more personal sounding version of it.
But there was a desire, a yearning in trauen and one day, around its birthday, it bought a van and a surf board and and was like “Bro, we need to talk. I need to move…”
And vertrauen was like “No need to say more, bro! Follow your dreams!! I got your back, trust me.”
And so vertrauen became the main word for to trust.

The verb itself is super useful already but there also some really cool related words.

And let’s not forget about das Vertrauen, which is trust and confidence.

By the way, for those of you who are interested in etymology…  the origin of confidence is the Latin fidere, which was also about trusting and being loyal and it’s actually where fealty, federal and faith come from. I was pretty surprised when my interns told me about that.
Not as surprised as I was when they told me they think it’s unprofessional of me to the prep meetings hungover, unkempt, unprepared and late. What the f**p?!?!  If I want to come to the office without taking a shower, I’ll do just that.  How dare they?!?! Damn millenials and their damn confidence.
But hey, speaking of confidence and daring, that brings us right to our actual word of the day trauen.
By itself, it can still mean to trust, but that’s rare and I think you only ever see it in context of not trusting a stranger, being suspicious.

What’s useful is the trauen with a self reference – sich trauen. A few hundred years ago, this simply meant to trust yourself. But slowly the phrasing shifted more and more toward what you might do when you trust yourself… taking a risk. Or in one word… to dare.
THAT’S what sich trauen means today and it’s pretty common because Germans also use the negative version to express that they’re scared.

I was actually a bit confused while thinking of the examples whether it is mir trauen or mich trauen because both sound kind of okay to me. But I think that’s just a regional thing and the Accusative (mich, dich) is the proper choice, while the Dative (mir, dir) is the proper choice for the prefix version zutrauen. This is not about guts though, but about the feeling that someone is capable of something. And it works for both, yourself and another person.

Cool.
And I think, that’s pretty much it for today. Well… except one thing. Trauen is also used in context of marriage.
Now some of you might be like “Wait, I though that was Hochzeit.”
And some other might be like “Wait, I thought that was Ehe.”
And again some other might be like “And I though it was Heirat.
And you’re all correct. But hey, why use three words when you can use four, right? Trauen itself is sometimes (very rarely) used for the act of getting married, die Trauung is the marriage ceremony and der Trauzeuge/die Trauzeugin  is the person walking the bride/groom to the altar.
Nothing you need to remember, but I wanted to mention it because it kind of brings all the ideas together. I mean, marriage is being treu (faithful) , it’s about vertrauen (trust)  and you need to trauen yourself (dare) and ask your partner :). Oh and by the way… we already mentioned the Latin fidere and that it’s the origin of confidence and faith. Well, it’s also the origin of fiancee and infidelity. All one happy family :)

And that’s it for today, this was our look at the family of trauen and vertrauen.
As always, if you have any questions or suggestions or if you want to try out some examples, just leave me a comment.
I hope you liked it and see you next time.

sich (acc) trauen – to dare, to have the guts
sich/jemandem etwas zutrauen – belief that someone is up to a challenge/has something in them
zutraulich – nice, friendly, not scared of humans (for animals)