A quick look at the reason why German 'bald' and English 'bald' look alike but have NOTHING in common meaning wise. And a few words for balding men in German :) 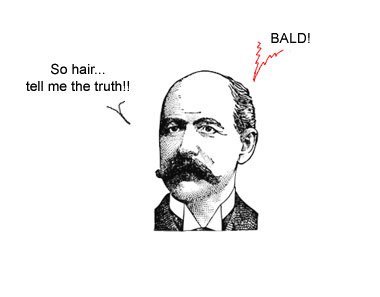 and welcome to a new episode of the most neglected series ever: False Friends Explained.
And the words we’ll talk about today look so incredibly similar, that they look identical.

Now, I’m not trying to find drama where there is none – even though they look identical, German bald and English bald are used in so vastly different domains that they don’t really cause confusion or misunderstanding.
Still, I thought it could be fun to take a look at where these two words come from and also take the chance and talk a bit about the world of going bald in German. A world I know nothing about. My golden surfer locks are as full and curly as when I was 23 last year… ish.
Anyways, let’s jump right in…

And we’ll start with the German side bald.

Most of you probably know that the German bald means soon. And just like soon, its “span” is quite flexible ranging from within a few years to within the next half hour.

I think bald might be on average a tiny little bit further in the future than soon. Or at least in the common good bye phrase

The German version would not fit if you’re about to see the person within the next few days.
But overall, bald and soon line up pretty well and there’s not much to explain so let’s get to the interesting part… the origin.
And bald is actually related to the English word bold. And we actually don’t need much mind yoga to see the connection.
Go ahead and try: what does bold have to do with the idea of soon.
Take a second and see if you can find the connection.
I will run my fingers through my golden, curly hair in the meantime.
…
wow.. so soft and yet determined
…
So, do you have an idea? If not, don’t worry. Sometimes we miss the most obvious things. I for example miss out on a lot of obvious Thaipos while editing.
Anyway, the connection is that someone who is bold or acts boldly will act without much hesitation. So he or she will act… soon. Or in German: bald.
German bald once meant the same as bold. And we can actually still find remains in names like Leopold or Archibald or the term der Witzbold, which is a common word for person who likes making (bad) jokes.

Eventually, mutig took over much of the idea of bold and bald focused on the time aspect.
Now, while we’re at it.. the origin of bald and bold might be the massively ancient Indo-European root *bhel which was about swelling. That’s the root of words like ball and for a connection to bold just think of two people puffing up their chest to appear brave :).
Cool.
So that was the German bald. Now let’s look at the English version.

The English bald is pretty much the opposite of what I am, thanks to my golden, curly surfer boy hair :).
And do you remember the origin of bold we just mentioned? The family of ball?
Well, bald might belong to that family as well. Like… “Oh no, I think am getting balled.”
But that’s just one theory science has.
Another one connects bald to a equally ancient root that was about shiny, white. Which would also make sense, because a bald head is shiny.
But it doesn’t really matter, after all. History is only fun and helpful as long as its fun and helpful. #fact
What matters is how to say bald in German.
Well, there is the adjective kahl, which is the German brother of callow and describes the idea of bare, bleak, naked and it is not limited to heads.

Yeah… … … just checking if you’re still paying attention ;).
So kahl is one option to talk about a bald head in German. But there’s a better one. Because German actually has a word for specifically that. Of course.
It’s the noun die Glatze and you getting one and having one are the most common ways to say going bald and being bald.

And some of you might have noticed it … the last example actually gives us clues as to why Glatze is called Glatze :).
Glatze, glatt (flat, even, slippery), glad, glow and gelb and yellow – they all come from the drastically ancient Indo-European root *ghel which carried the idea of shiny.
And you know what else is shiny?
My golden surfer locks!
Which I have to comb now. I have to comb them like 6 times a day, you know.
But we’re done anyway I think. This was our look at the false friends pair German bald and English bald. As always, if you have any questions or suggestions just leave me a comment.
I hope you liked it and see you next time.

Oh by the way… have you noticed the little summary box at the top of the article? The plan is to add them to all the articles on the site so you get an idea of the words you’ll learn. Let me know what you think about it :)

Oh, and don’t forget to follow me on Instagram for daily shots of me and my beautiful hair: @goldenboy68+1