The meaning of “vorstellen”

"vorstellen" means "to introduce" and "to imagine". Today, we'll learn how that makes sense and how to use it for both meanings. 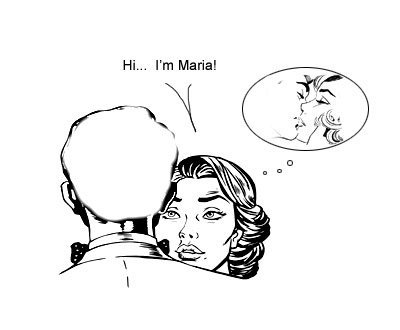 and welcome to our German Word of the Day. This time we will have a thorough look at the meanings of the verb:

Before we actually begin maybe you want to get a tea or a beer; whichever helps you concentrate is fine, as this time it is … grammar-time. Case-time to be specific.
The reason is that vorstellen is actually has two super important meanings  and the cases kind of matter here. I mean… they kind of always kind of matter, but here they REALLY matter.
Anyway, before I ruin this intro even more, let’s jump right in…

And I’m going to tell you the two main meanings of vorstellen right away.. many of you probably heard about them:

And it’s a great example for how German prefix verbs can appear to be crazy and random on first glance, while actually being quite logical.
Vorstellen consists of the basic verb stellen and the prefix vor.  The prefix vor, one of the easiest of the bunch, expresses the idea of in front of/ ahead.  Stellen basically is the brother of legen and they’re both about placing something. Legen means to place it horizontally while stellen covers the vertical part, but that doesn’t really matter for us today. The general idea of placing, putting is enough.
So taken literally, vorstellen is something like putting something in front.
And that actually fits perfectyl with both meanings the verb has.
Let’s take to present first.

You see, presenting is in essence putting something in front of someone like “Tadaah!”.
And it’s the same for to introduce, only that there you’re often presenting people.

Sure, Thomas doesn’t literally puts his girlfriend in front of his parents, but we really don’t need much mind bending to see that vorstellen as introduce actually makes a lot of sense.

But what about the other meaning, to imagine?
Well, think about it. Is it really that different?
If you imagine yourself on a beach for example, you do picture that beach right in front of your eyes. You mentally “put” an image in front of you.
It’s actually kind of the same.

So the meaning of introducing and imagining are certainly different. But they share this aspect of something or someone being “put” in front of you. And that’s why German uses the same verb for it.
Now, you might have noticed that I used different colors in the examples. That was to kind of lead toward the grammar portion. But before we get to that, let’s really quickly give a shoutout to the third meaning of vorstellen.
Yes, there’s a third meaning.
It’s nowhere near as useful as the other two, but we do need it at least once per year when clocks are switched to daylight savings time. Because that’s also a meaning of vorstellen… setting your watch ahead.

“Bro, it’s 2020. Watches have been doing that by themselves for a while.”
Well.. okay… I guess you’re right. I just wanted to mention it.
But I see you can you can’t wait to get to the grammar part, so let’s do it.

The grammar of “vorstellen”

The challenges with using vorstellen correctly is first of all to pick the right cases for what we want to express.
We’ve just learned that the imagine-meaning of vorstellen ties in well with the idea of presenting. Let’s take that translation for a second and compare three configurations. Blue is the direct object which will be accusative in German, and green is the indirect object, which in German will be Dative.

Now, let’s loook at the same examples in German.
Actually, I changed someone to Frau, so the phrases look a bit more natural, but structurally they’re the same.

We can see that the thing that is being presented (introduced, imagined) is ALWAYS the direct object and the person who gets to see it is the indirect object.
That’s actually pretty straight forward, and makes perfect sense.
What makes the whole thing a little confusing to many learners is the self reference.
The imagine-vorstellen ALWAYS has a self reference, and it is the indirect object. You “present” the mental image “to yourself”. So it’s Dative in German.

But you the introducing-vorstellen works fine without a self refernce, too:

Note that if you were to add a little mir to the first sentence it would change and become to imagine.… because now I present to myself and that means to imagine. I admit that it is a little tricky but let’s also not think about it too much because that’ll stress you out…. ah, screw that… let’s actually look at some twisted examples with this :). Just for … ahem… “fun”.

Only one letter difference, barely audible. And yet a question of being home alone or not. The woman in the second sentence is in Dative. Thus she is the one to whom is presented while in the first example she is the object being virtually presented to Marc by himself.
I know you’re like “Gee, how am I supposed to build this.” but don’t worry. You don’t really have to. We’re doing this just so you get a better understanding of what’s going on.
So, ready for the next mess?
Behold…

Here, we can’t tell which case is which because sich can be either. So technically, this can mean two things. The first one is  Marc imagines himself in 10 years… like, where is he going to be, how is he going to look and all that. The other one is that Marc travels to the future and introduces himself to his future self. Which is more likely depends on how much you believe in time travel.
Seriously though, let’s do one more …

Cases really matter here, but I think rather than thinking about the cases too much, you should think about the ROLE that the case expresses. Like… who receives the “putting in front”. Because cases are usually just an expression of role, not a thing on their own.

Cool.
So we’re pretty much done for today, but I think we actually haven’t had a proper example for vorstellen in past tense, so let’s do that real quick.
The ge-form is vorgestellt and it works with haben.

And let’s also mention the corresponding noun die Vorstellung, which can be imagination or  show, screening, presentation so it covers both meanings of the verb.
i’ll leave the examples up to your Vorstellungskraft :)

And that’s it for today. This was our look at the two meanings of vorstellen, how their ideas connect and what to pay attention to with their grammar.
As usual, if you have any questions or recommendations as to what needs to be explained a little better, please leave me a comment.
I hope you liked it and see you next time.