Word of the Day – “unbedingt”

A quick look at the meaning of "unbedingt" and how to use it and what it has to do with the Vikings. 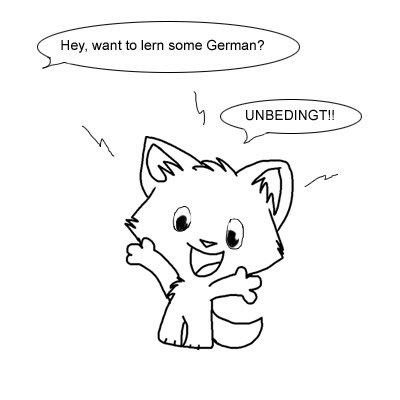 *I know there’s a typo, I’m too lazy to do it again

and back :)! Hooray!!
August kinda sorta low key sucked, because I was sick. Not what I had planned at all, but hey, that’s what happens if you don’t listen to your body and mind.
I mean, sometimes when we get sick, it’s just bad luck and risk of life, but sometimes, we have some part in it, and so by getting sick we basically also get a much needed nudge to make changes and be happier, healthier and sexier for it. And with more abs and chest muscles.
Anyway, so summer is over and I’m sure most of you are really hyped up to really get back to learning German.
And today we’ll take a look at a word that is just PERFECT if someone asks you if you want to learn some words. So get ready for a look at the meaning of


When I first started looking into this Saturday morning, I immediately spotted the bed in unbedingt. A first lead! But it led nowhere. Because the real core is something different, and I’m almost sure you guys have seen it already… the word Ding.


Ding is the German brother of thing and even though Ding is not used as broadly as thing, both words are very common.
Which makes the origin all the more surprising because the “ting” originally was the assembly of elders or chieftains of Germanic tribes.
At the ting, they would get together, settle legal disputes and debate matters of the community.
And this sense is actually still visible today, in the Scandinavian languages. The Norwegian parliament, for instance is called  Storting (“great assembly”), the one of the Faroe Islands is called Løgting (“law assembly”) , and the parliament of Iceland is called Alting (no idea what the al is). Oh and not to forget the assembly of the shared apartment I used to live at when I was in Finland, which we called The Great Farting.
Yeah… nothing funnier than a bunch of 25 year old 9 year olds.
And speaking of old… the Icelandic parliament is apparently the oldest in the world and it was founded in 930!!! Those vikings, bro. I’m tellin’ ya.
But yeah, so the original idea of Ding was an assembly to pass judgments and make laws. Then, slowly the Germanic tribes started using ting also for the subject matter discussed at a ting. And from there, it shifted to the general sense of… well… thing. I don’t even know how to describe it :).

But for us today, it’s the original sense that matters as that’s the key to the verb bedingen.
Bedingen originally quite literally meant talking about something at a ting, discuss.
And in fact, if you read literature in German you might at some point come across the ge-form ausbedungen. That is an old form of the now outdated ausbedingen which kind of meant to negotiate.

This is really only for the books though.
Bedingen  itself has slowly shifted toward a sense of to determine (at a ting)  and then broadened and took on the general sense of causing. I mean, causing something kind of “does” determine the future in a way.

This use is not very common though and you have to have lots and lots of sprachgefühl to know when it sounds right (in most contexts it doesn’t), so it’s not really something you’ll need actively.

That’s completely different for the noun die Bedingung though.
Which originally referred to the resulting arrangement of a ting. Like for instance:

“If the brewer doesn’t deliver 10 barrels of ale to the smith within the fortnight,
the smith shall take 3 of the brewer’s sheep.”

And I think you can immediately see why Bedingung today is the German word for … condition.

There is one context, however, in which Bedingung absolutely doesn’t work and that’s condition in the sense of the “state” of a person or object.
The proper word is der Zustand or die Verfassung

Having Bedingung here would sound a bit like you’re keeping the books in a good environment, if that makes sense.
Anyway, Bedingung is a really useful word to know and it’s also the key to the word unbedingt.
Which as most of you might now suspect is the “un-“-version of bedingt.
Well, it is.
A bit earlier, we saw bedingt used in a sense of causing.
Well… that’s not its only idea.
Bedingt also carries the notion of condition, that we know from the noun die Bedingung and it is used to express that there are certain conditions, limiting or curtailing reality in some way.

And the un-version of that basically expressed the opposite. There are no limiting factors.
And from there, it evolved into what it is today… a really common way to express the notion of absolutely, totally or no question.
As you’ll see in the examples the whole notion of condition is pretty clouded. And actually I don’t think Germans are necessarily aware of the connection. But it does make sense, I think.

Now, if you look at the examples again, you might notice that three of them are with müssen and one is about wollen. That’s because unbedingt is mostly used in context of your obligations, wishes and plans.
And this is important! Don’t think of it as a general option for really.
It DOESN’T work for mere facts or statements about the present..

AND it absolutely doesn’t work as an intensifier for adjectives…

So yeah… wishes, obligations and plans... THAT’S when you can use unbedingt.

Still, unbedingt is a very very common word. You’ll definitely hear it a lot, you should unbedingt add it to your vocabulary and I think/hope it won’t take long to build a feeling for it, now that you know where it comes from :).

And I think that’s it for today. This was our little look at the meaning of unbedingt and its family.
As usual, if you want to check how much you remember, just take the little quiz I have prepared for you.
And of course, if you have questions or suggestions just leave me a comment.
I hope you liked it and see you next time.