A fun look at the word "das Bild" and how its core idea formed (hint, hint) all the cool, useful related words - more than just a picture :) 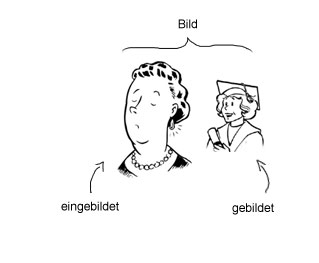 I think most of you have guessed it… a Bild is a picture.

But not only that. It’s also the word for the more abstract sense of “mental image”.

And of course there are useful compounds with it.

Those were just a few examples, there are boatloads more.
And yet, it’s just the tip of the icebild, I mean iceberg. For the full potential, we need to look at the verb bilden.

The meaning of bildenis … to form.
And that’s actual closer to the noun than you might think. Because Bild actually used to be a somewhat broad concept. Like… it is not limited to the 2D picture. In fact, for Bild was used for any kind of “appearance”, anything that “you see”. The perfect example is the word der Bildhauer

The sculptor quite literally “forms an appearance”. That was the original sense of bildenand slowly, it shifted away the focus from the whole notion (copied) appearance notion and moved toward create, evolve.
By the way, you might be wondering if there are any English relatives. At first, I was like “This is probably related to to build“, because of the sound and the whole forming aspect, but nope. Bild was never part of the English strand of the Germanic languages and it’s also unknown where it actually came from. It was just kind of there one day.
Anyway, so bilden means to form, (in the sense of forming something new.)
Let’s bilden some Beispiele :).

In these examples, the bilden was done by someone. But stuff can also form by itself. And while English leaves it up to context, German will pretend like it doesn’t understand if you don’t put its beloved self reference into the sentence. German is OCD like that.

Now, as far as nouns go there is das Gebilde which means something like “strange formation” in a physical sense

But by far the more important noun is die Bildung. It can mean formation in the sense of the process of forming.

But that’s not the main meaning of Bildung.
That meaning is…

Yeah, nope :).
I got some milk, if anyone wants to skim something ;).
The most common meaning of Bildung is education. And the verb sich bilden can also mean to educate (oneself).
And that makes a lot of sense actually. I mean, educating yourself is pretty much a way of “forming” your mind. And if that’s not convincing enough … just think of the word to information. It’s not the same, but just like Bildung it comes from form and is about knowledge.
Now, the verb is not all that common actually and only works for somewhat broad contexts. The noun however is incredibly common and there are many many compounds with it.

Also about the idea of education, though somewhat more narrow is the prefix version ausbilden, which means something like to train in the context of a profession. So… you can ausbilden someone to be a fireman for instance. But you can’t ausbilden for a marathon. That would be tranieren. The noun die Ausbildungmakes it more clear, I think, because that is the German word for apprentice ship.
The words are pretty common in Germany, much more than apprentice is in English, no idea why.

The word Auszubildenderis actually kind of a nightmare to pronounce. That why people in more colloquial contexts say Azubi. That’s Japanese and stands for “the flower that blossoms under an old tree.”
Okay, it’s of course not Japanese. But it was a nice image.
Anyway, of course there are what realists would call “more prefix versions”.
Nachbilden and umbilden, for example, which are both based on the forming-bilden. The former is about the idea of copying the latter about reshaping, but they’re both super niche-y and only work in a few contexts.
Then, there’s abbilden, which is actually based on the Bild-idea and means something like “capture in pictures” (and also to transform in a mathematical sense).

This one is more common than the first two, and if you have to write academical papers in German, you will need the noun a LOT.
But the most useful prefix version is sicheinbilden.

And what’s really cool about sicheinbilden is that it kind of merges all three ideas – the image, the forming and the knowledge.
Because sicheinbilden is about forming an image of reality (knowledge) in your mind… you “form, depict something to yourself”.
A bit like to imagine, but not quite the same. The crucial thing about sich einbilden is that you take whatever you’re imagining as reality when it actually isn’t. Kind of like to hallucinate, just more subtle and not as crazy sounding. We could call it self deceiving imagining. The word for this hypothetical imagining is sich vorstellen.
Let’s look at a few examples…

Oh, in case you’re wondering why it was dir and not dich in the example with the noise…. you’re imagining the thing TO yourself, you’re “receiving”. So we need Dative. An accusative would mean that you are the thing being imagined.
Anyway, the noun for einbilden is die Einbildung.

The last one is actually a quite common idiom and it’s a great transition to the last word for today… eingebildet.

Technically, eingebildet is the ge-form of einbilden, so the sentence above could mean that the waiter is totally imaginary. But based on this whole notion of having a wrong self image, eingebildet has become THE German word for conceited, stuck up.

And that’s it for today :).
This was our look at das Bild and bilden.It was quite a range of stuff actually… pictures, education, forming, hallucinations… but I hope you could see how they all share the core idea of image and form.
As always, if you have questions or suggestions or if you want to try out some examples just leave me a comment.
I hope you liked it and see you next week.

abbilden – depict (capture in pics, sounds somewhat formal)
die Abbildung – the graphic (pictures and so on in books)

This entry was posted in A-Level, Must have words, Nouns, Vocabulary. Bookmark the permalink.
Subscribe
61 Comments
Oldest
Newest
Inline Feedbacks
View all comments