Word of the Day – “stecken”

A fun look at the family of "stecken", what a plug has to do with hiding and why Latin people "like your pen". 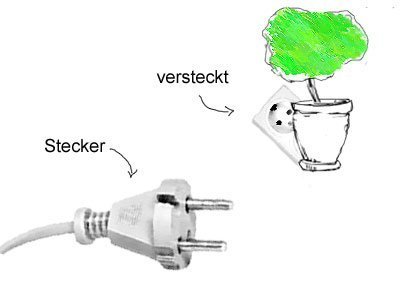 I’m sure it’s not a super crazy reveal that stecken is related to to stick. And the two verbs do overlap. But they also have their differences. And their family as a whole is pretty interesting. So we have lots to talk about and lots of cool words to learn and I’d say, we’ll jump right in.

The origin of the family is the outstandingly ancient Indo-European root *steig-. It expressed the idea of being pointy and possibly poking something with it. And stecken and to stick are not its only descendants. The root is also the origin of German stechen (to sting, to stab) and its noun der Stachel (the stinger). And while that is not that big of a reveal, you might be really surprised that the root is ALSO the origin for stigmata, instigate, stimulus and… drumroll please…  style. Yup, style. Style comes directly from the Latin word stilus, which was a pointy object to write with.
So  “I like your style” – or in Latin “Stilum yorum me pleasis”** – basically originally meant “I like your pen.”
(**might not actually be Latin)

Anyway, while style has changed quite a bit over the many centuries (no pun intended), stecken and stick have stuck (ops, again no pun intended, I am really sorry) to the original idea.
A stick, or der Stock in German, is still a pointy object, and the verbs stecken and to stick have a notion of putting something “pointy” somewhere.

But there’s also a new element – the notion of fixation.

And this brings us to the most important difference between German stecken and the English to stick. To stick has broadened the notion of fixation to include contexts where there’s some sort of glue. Just think of the adjective sticky.
German stecken does NOT have that. Instead, you need to use a word of the kleben-family.

Stecken can express the idea of being stuck, but ONLY in a mechanical sense. Like… putting lipstick into your nose and not getting it out.

I think it’s best to think of stecken as a verb about positioning. German likes to be precise about placement and uses a variety of verbs for to put, depending on how and where something is being put.
The special “power” of stecken is this notion of sticking in and fixation. It does translate to to stick sometimes, but German also use it a LOT where English would use …. often it’s used as to put even to be.
Cool, examples.

As you can see, there doesn’t really always have to be a notion of real sticking, or being stuck. In the last example, you could just as well say “Wo warst du?”
The only thing stecken does here is adding a little flavor of hidden.
And this brings us right to the prefix versions.

Because one in particular is what we need to talk about actual, factual hiding. Do you want to give it a go?
Here are the options…

You have one gif to think about it :)

And? Do you have an idea?
Well… the correct answer is …. verstecken.

Verstecken is the German word for to hide, and if you’ve read my article on ver-, that’ll make perfect sense to you. One of the ideas of the prefix  ver- is away, and if you put something away, it is out of sight. Or in one word: hidden.

And what about wegstecken?
Well, wegstecken is also about putting away, but it doesn’t have the notion of hiding.
You can use it for literally putting away something, or in a figurative sense of coping with something.

And this brings us right to the next one, einstecken. This one has a focus on “inside”. Think of the ein- as a generic pocket. So instead of stecken into X, you can just say einstecken… without the X.
In the right context, that can express the same idea as wegstecken, but it’s also often used in contexts of taking something with you.

The one thing einstecken DOESN’T mean – and those of you who are veterans of the great Prefix Verb Series will know this – the one thing it doesn’t mean is literally sticking something inside of somewhere. For that we need the r-version reinstecken.

Cool.
Now, there’s one more version of stecken that I want to mention and that is anstecken. If we take it literally, it should mean something along the lines of sticking something somewhere.
Well, it is used in contexts of pinning medals on someone’s chest..

And in a way, the actual real everyday meaning is also about sticking something to someone. But it’s not a medal. It’s a cough, for example. Or diarrhea. Or enthusiasm.
Do you know what I’m talking about?
(sich) anstecken is the word for infecting someone (or oneself ) with a disease or metaphorical condition.

Now, does that meaning REALLY come from the idea of pinning your disease to someone?
Probably not. Anstecken actually has a third meaning, and that is to light in context of fire. It’s rare these days, but you can find it used in books for lighting a cigarette for example.

This meaning is based on an old medieval usage of the word in sense of pinning an incendiary composition somewhere.  And if we now consider that one type of disease is an inflammation, then it’s not that crazy anymore that anstecken got the sense of transmitting an infection.
Oh and just to give you one more little way of connecting the dots… just think of the word to instigate, which was also a member of the family. Instigating, lighting a fire, getting an infection… they all share aspects.

Anyway, let’s get back to practical things and look at a couple of examples for the noun die Ansteckung (the infection/transmission of disease) and the adjective ansteckend which means contagious.

But you guys are not yawning right now, are you? *worried look
Seriously though, we’re almost done for today.
Just a few cool nouns that we need to mention. First up, we have the noun das Besteck, which is the German word for silverware or cutlery – so the whole of knifes and forks and spoons.

And the origin of this word is surgeon tools, like scalpels and lancets, that they would put (stecken) into a case. Yup, that’s really where this word comes from.
And last but not least we have the … well… couple Stecker and Steckdose. A Stecker is a plug and a Steckdose is where a Stecker goes… a wall socket/outlet. And for once the genders actually make sense, because Stecker is der and Steckdose is die.

Yeah… there’s a lot of things wrong with the last example. But it’s here to show you that Stecker works for all kinds of plugs. Except those to keep water in a sink. That’s a Stöpsel.
A Steckdose on the other hand is ONLY the word for an outlet/socket where you actually get electricity from. The word for a USB port or a FireWire port or whatever is der Anschluss or, in a more technical sense, die Buchse. Depends on the personal orientation of the plug.

And with this dumb joke, I’d say, we’re done for the day.
This was our look at the family of stecken and its prefix version. At its core, stecken is a placement verb that has a notion of piercing and fixation added and that shines through in most of the family members.
As usual, you can take the little quiz my snoring assistant has prepared for you.
And of course, if you have any questions about stecken, or specific uses of to stick or some other prefix versions of stecken … just leave me a comment and we’ll clear it all up.
I hope you liked it, have a great week and see you next time.

stecken = to put (in a stable, fixated fashion, usually inside something), to be (for people and talents)
stecken bleiben = get stuck

der Stachel = the stinger
der Stock = a stick
stechen = to sting, to stab