We'll take a thorough look at the meaning of "passen", how to use it and its various cool prefix versions and pass by "passieren". A vocabulary turbo boost :) 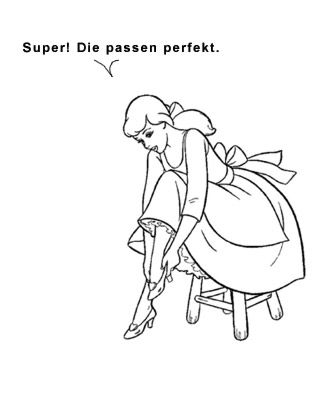 And not only that, of course. We’ll also look at the really cool prefix versions like verpassen or aufpassen and we’ll talk about passen’s fancy sister passieren. And if we then have some time left, we’ll reveal the secret to eternal youth and beauty.

So, let’s not waste any and dive right in to passen.

Passen is of course the German brother of English to pass. And we only need to think for a few second to see that the verb is actually really borad – like… passing a test, passing salt, passing time.

German passen is equally broad and in fact many European languages have pass-words (ahem) and they’re all super useful.

So to get to the core of the family, we need to go to its origins. And that’s of course good old Latin.

The core idea of “passen”

Back in ancient Rome, there was the word passus which meant a step/stride.
From that, the Romans then made the verb passare which literally meant making steps and which initially was used in the simple sense of walking somewhere. Soon it shifted toward the general sense of a journey, which we can still see this in the word der Passagier (the passenger), for example.
But then, the verb started shifting focus, away from the mere destination, toward the stuff you get to see on the way there. Think of hiking. The place we’re hiking to is only part of what matters. Equally important is the things we see along the way. Or in one word… the things we pass.
And THAT’S the core of most pass-words today.
Here it is as a visual image

In English, it’s really easy to see.
Point B could just be sitting on a bench in a park while A passes by on a bike. Or point B could be sitting on the couch watching Netflix while time (A) passes by. Or, to use an abstract one, B could be a test asking the students (A) tough questions before letting them pass to intermediate level. Quite obvious, and we can also find that in German words like der Reisepass (passport) or der Gebirgspass (mountain pass)

The German verb passen, on the other hand, in’t as obvious.
Because there was another shift in meaning. For a long time it was just like its English brother about going by.
But then the meaning shifted, and even though it was just a small shift on paper, it changed the meaning completely. And today passen is actually pretty much NEVER a translation for to pass.
Let me repeat that in red:

!! passen is pretty much NEVER a translation for to pass !!

I’m not even sure if you would be understood if you tried that.

This is a correct sentence. But it totally does NOT mean that time passes. Instead, it means that the time is suitable.
So what’s that mysterious shift?
In Essence, it’s a shift from passing by to getting a pass. That can either be a permission, or it can just be about something fitting somewhere or it can be about being “okay” – there’s always a notion of:

THAT is the core of the German passen today and it’s at the core of all the various uses.

There are actually quite a bunch of possible translations for passen. But they all share this underlying theme that we just found. It is basically a matter of what kind of “criteria” are being “met”. It can be something objective like a size…

But it can also be personal preference…

or some other illusive kind of “spec”…

To a German, all these examples really kind of feel the same, and I hope with this notion of “getting a pass” in mind, you can see that.
Let’s look at some more examples…

Quite a wide range of uses already, but it gets even ranger… I mean, wider…. once we bring in the prefixes.

the prefix versions of passen

We can for instance use prefixes to be appropriately** precise as to what fits where…. (**might mean “painstakingly”)

But of course there are also some versions that are a little more abstract.
Anpassen for instance is not directly about something being a fit. Instead, it is about what we do if something or someone ISN’T really fitting criteria – because anpassen is about modify it until it does.

And while that is still in line with the overall theme of fitting, there are two very common prefix versions, that don’t really seem to passen to the rest :)

Let’s start with verpassen. Verpassen means to miss. And actually ONLY the missing in the sense of missing a bus. You know … like…

Aw… that bus was my favorite… I’m gonna miss it.

Oh, wait… I just mixed them up. I meant this one, of course

Just missed the bus. Will be 10 minutes late. Sry.

And I think you can already tell that this is a leftover of the older version of passen, from back when it was still in line with the English to pass. When we verpassen (miss) the bus, that means that the bus passes us.
And by the way… the whole missing-notion of verpassen is actually kind of new.
Some 300 years ago, give or take, Goethe, that over-hyped German poet, wrote :

And he DIDN’T mean that he missed the storm. Back then this just meant that he “passed” it. There was no notion of missing in that verpassen. However, that changed when he later saw the status update of his friend Charlotte.

“Best storm ever! Been dancing and cheering in the rain for hours.
Never felt so alive, #storm#fun#romantic @joegoethe”

Shabam… and Goethe new that he had missed out on Charlotte dancing in a wet t-shirt, and from this day onward verpassen was about to miss.
Okay… of course that’s not exactly 100% what happened. But anyway… here are a few examples

I guess the German version of FOMO would be AEZV. I think I know why no one uses that one, though.
And while we’re at it… if you’re like me and you suffer from FOMO, you know what a really good remedy is? Sit in German class! Or in any class for that matter. You will have NO FOMO about that whatsoever and peacefully doze off.
Like… why do we actually not have FOMO in class? I mean… we’d be like “I gotta know this, I mustn’t miss this” and we’d pay attention the whole time. That’d be awesome.
And speaking of paying attention…. that brings us right to the other verb, aufpassen.
Because aufpassen means exactly that… uhm… to pay attention.

So where did this meaning come from?
Well, it’s actually kind of been there all along. Think back to the little image we had… point A passing point B.
That is only one way to look at it. The other way is to say that point B is “making” or “letting” point A pass.
The English to pass still kind of works both ways, by the way.

Anyway, back a few hundred years, passen was commonly used for the job of a city guard. They’d let/make people pass after taking a good, thorough look at them. And this notion has survived in aufpassen and slowly broadened to the general sense of about paying attention. Not the most convincing, but that’s all I can offer :). So let’s just look at some examples…

Oh, and it can also be used in the sense of “protectively” watching something or someone. This will then be connected with an extra auf… because German loooooves doubling down like that :).

Cool!
So now of course there are a few other prefix versions of passen, and there are some niche uses that we didn’t mention. But none of them are worth spending too much time on. At least not considering that there’s another member of the family: passieren.
And that one is REALLY freaking important.

The Germans imported passen a thousand years ago from Old French passer. Then they messed it up and shifted the meaning away from passing toward the whole notion of “fitting criteria”.
And then, a couple of hundred years ago in a tavern near France, this conversation took place…

“Hey, check out the cool word the French have… passer … it means to go by and to happen.”
“Why don’t we have such a cool word… we should totally import that.”
“Kinda looks like passen.”
“Nah, that’s a coincidence.”
“Stimmt. Prost.”

And so they imported it again. This time as a fancy French-y version.

That sure sounded much more noble than vorbeigehen or durchgehen and the gate guards felt very distinguished. But as gate guards became less common so did this use of the verb and today people don’t use passieren for actual going too much.
The word itself didn’t disappear, though. Instead, it shifted toward the other meaning it has in French and became the number one German word for… drumroll… to happen (the reflexive “se passer”, in actual French)

And that makes total sense, actually. Just think of the English phrase “to come to pass”, which is virtually a synonym for to happen. Something that happens kind of does pass by in front of us.
Either way, German passieren is in credibly common, so here are a few examples.

As we can see, passieren forms its spoken past with sein. It is

That makes total sense if we remember that it’s origins are about going from one place to another place.
And if you want to add a person to whom something happens, then you’d do that with everyone’s third favorite case… the Dative.

Cool.
Now, German actually has all kinds of other words for to happen in books (sich ereignen, geschehen, sich zutragen, sich abspielen, vor sich gehen…). But when it comes to daily spoken German, passieren is the one used.
And you know what… as if that wasn’t enough, you can also find passieren elswhere.
IN the supermarket for instance. On a can of “passierte Tomaten”

Now, does that mean “happened tomatos”??!?!
Of course, not. Passierte Tomaten are what you get when you put tomatoes in a blender. Kind of a thick tomato juice. Because passieren is to puree food into a mush, for instance carrots for a new born. Now, what would you say… is this passieren the same word as the happening-passieren??
Place your bets now….
It is.
Back before there was a blender one way to puree your veggies was to press them through a sieve or a strainer. Or should we say pass them through a sieve :). They pass the sieve and that’s why they’re called passiert and that method is also why passierte Tomaten are sometimes called sieved tomatoes in English. I was actually really surprised when I found out that the two passierens are actually one and the same. They just feel soooooo incredibly different.

Language is crazy sometimes.
And I think that’s a good place to wrap up :).

This was our look at the meaning of passen and its various prefix versions and I really hope you got a better understanding of the word.
As always, if you have any questions or suggestions or if you want to try out some examples just leave me a comment. I hope you liked it and see you next time