A quick look at "aufmachen" and why it doesn't only mean "to open". Also: a look at the secret behind the r-verion and the super useful "raufmachen". 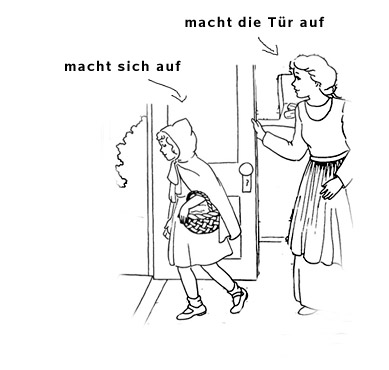 and welcome to a  couple truths:  German has a plenty of prefix verbs that need explaining and summer is coming. Shabamm.
Time for a series that tackles both, and this series is about to start because you’re at the beginning of the very first episode of

In each episode (and there will be a LOT), we’ll take one prefix verb and look at what it means and WHY it means that and see how to use it properly.
And today, we’ll start with a look at the meaning of

And one rather general warning right away… prefix verbs usually DON’T translate to what they look like.
Or in case of aufmachen…

Aufmachen does NOT mean to make up.

Make up one’s mind, make up an example, make up for something … if you were to use aufmachen for these it wouldn’t even be understood.
So what does it mean?
Well, we have auf and machen…. Machen means to make and to do and Germans use it for almost everything.
Auf is pretty typical for these separable prefixes in that it has two completely different notions. One is based in the word as a preposition and it is about location, the other one is seemingly  random one. To some verbs they add both notions, to others just one of them. And most of the time especially the meanings based on the local notion are somewhat abstract. So they are not so much about actual location… but we’ll get back to that later.
In case of auf the two ideas are “on top-ness” (the local component) and “open-ness”.  It can add both notions but by far the more important notion is open-ness.
Because the main use of aufmachen is to make open or simply…. to open.

Now you might be like “Hey, I thought to open was öffnen?”.
And that’s totally correct too. In fact, all words that are related to open like Flaschenöffner (bottle opener) or die Öffnung (the opening) are related to offen and öffnen.
But Germans really do like machen and they love having these prefixes at the end of a sentence and so when people talk about day to day basic opening of stuff, they use  aufmachen, not öffnen. Öffnen sounds a bit stiff and technical .. like..  You’d use that for a museum, but not for a beer.
Sure, you have to deal with this little prefix at the end, but you don’t have to bother with this weird ö-sound ;).

All right.
Now, this is definitely the main use of aufmachen, but it’s not the only one.
There’s also aufmachen with a self reference. And that means something quite different.

That’s right. Sich aufmachen means to head out, to start going someplace.
Seems like there’s no connection to the idea of opening. But don’t forget the other idea auf can add to a verb – the idea of on top.
You see… German has the following expression common:

So maybe sich aufmachen is just a shortened version of that. Or it is but maybe it’s just the idea of making oneself upright… like … getting up from the couch.
Either way, the phrasing ispretty colloquial and even more native and cool than for example losgehen.
Like… losgehen is a cool club but it’s in all of those travel blogs and so everyone kind of knows it while sich aufmachen on the other hand is that hangout that only the REAL locals know about…. like… you’re REALLY in the know.
Anyway, here are some examples.

All right.
Now, as far as related words go, there’s really only a couple of them for aufmachen.
One is der Aufmacher, which technically means opener. But it’s not what you need if you want to open a bottle for example. That would be an Öffner. Aufmacher is ONLY opener in context of newspapers. The lead feature, that big fat headline on the front page that makes people buy it.
And this leads us right to the other noun, die Aufmachung, which means something like the layout, the design, the style. So this is kind of the closest that aufmachen gets to make up… which it is NOT a translation for. Just to stress that again :).
Now, Aufmachung is a pretty word, actually. So it only works in certain contexts, newspaper layout being one of them, but I don’t think you’ll need it in daily life. Just keep in mind that it’s NOT about opening something.
Cool.
So that’s pretty much all there is to say about aufmachen.
But of course that’s not all for today, because like for most prefix verbs, we need to look at the r-version.

R-versions (which I have yet to discuss in a separate article) usually are the most literal, locational interpretation of the combination of verb and prefix. So in case of raufmachen that should be something like “to make something on top of something“.
And indeed that’s what it is. Because raufmachen means to put on top.
And yes, machen is another option for to put. Because… you know… setzen, stellen and legen are NOT enough.
Raufmachen is VERY colloquial, but also pretty common in daily life. It’s primarily used in sense putting toppings on food but as you can see in the examples, you can find it in other contexts as well.

And I think that’s it :).
This was the ever episode of our brand new series on prefix verbs, which started five years ago in 2015, but which is still as fresh as ever in crazy ass 2020. I mean… that’s my prediction, anyway. I can’t know, because it’s 2015 still.
I have a hunch though that 2020 will be… strange.
Anyway, as usual, if you want to check how much you remember, just take the little quiz I have prepared for you.
And of course if you have any questions about any of the meanings of aufmachen  just leave me a comment.
I hope you liked it and see you next time.

spoken past:    form of “haben” + aufgemacht

prefix opposite:  zumachen – to close