German bekommen and English to become look the samee but they don't mean the same at all. Today, we'll find out why and how surprisingly close they actually are. 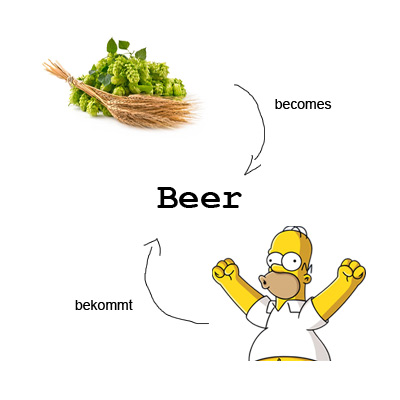 and welcome to a new episode of our Summer, Sun, Vocab Fun series, this time with a special summer edition of

In these types of posts, we explore infamous pairs of false friends and find out how to properly translate them, and
more importantly, who’s to blame for the mess!
Was it English or German? Or do they just look similar by coincidence? Or was it those politicians again?

Either way, someone has to get CANCELLED for the confusion.
And today, we’ll look at one of the most famous, most confusing pairs of false friends ever:

I actually had a segment about this in the article about “werden”, so if you’ve read that, you might already know what’s going on.
But as I was giving that article a much needed do-over the other day, I felt like this topic was a bit crammed and out of place there. This is just such an iconic couple of false friends, they deserve to have their own article. And they actually have a really surprising connection.
So if you’re ready, let’s jump right in.

bekommen and become – why are they so different

bekommen and to become are definitely brothers, so they’re not just two words that look alike by coincidence.
But while the English become is about the idea of evolving, the German bekommen is about the idea of receiving.
And mixing up the two is really really confusing.
I’m sure most of you have at some point instinctively translated to become as bekommen and said something like this:

Which to a German native speaker doesn’t really mean anything.
And it’s equally as weird the other way around.
So a German speaker might say this:

“I became a couch yesterday.
And now get to da choppa!”

Which will leave a native speaker of English wondering, what kind of a weird German idiom is “becoming a couch” ? And what chopper? And why should I get to it?

Seriously though, the natural question that comes to mind is of course how these two words ended up with two completely separate ideas.
But the question that’ll really help us is whether the two ideas actually ARE as different as they seem.

Because the answer to that is no, the ideas are not that different.
At least, they’re similar enough to be combined in one English verb: to get.
To get carries both ideas, becoming and receiving.

To get works perfectly fine in both contexts, and the reason for that is that on an abstract level, the ideas of becoming and receiving are actually share a common concept:

And the only difference is which side is “moving”, A or B.

In linguistics, verbs and structures like this are called bidirectional. They’re not all really a big deal in English, but there are some examples besides to get.  Like to taste, for instance…

But then, for some reason, the English to become shifted entirely toward the idea of evolving (you moving toward something), while German bekommen focused on the other direction, the receiving.
I mean, in an ideal world they’d probably both moved in the same direction, but you can’t go against the third law of language learning:

Confusion of learners must always be achieved.

And achieved it is with this pair.
Seriously… I don’t think any English speaker who has ever learned German has not made the mistake at least once and used bekommen for to become, when the actual word we need is werden.

By the way, if you want to read more about that one, just check out my article about it. It’s a two part article actually and we explore why werden means to become and why it is also used for the future tense AND for the passive. I’ll leave the link to those below.

So, now we know why become and bekommen don’t mean the same anymore and how their meanings connect.
But there’s another question lingering…

What does “become” have to do with “come”?

We’ve seen that become and bekommen were essentially about attaining/getting something. And in a way, kommen and to come are the same, only that they’re about attaining/reaching/getting to  a location. So there’s definitely a shared theme.
But the connection becomes even more obvious once we know that the prefix be- originally was the same as by and bei, respectively – but it was the unstressed version.
Like, take these two verbs:

A few hundred years back, they basically had the same prefix, but in bypass the emphasis is on the by, while in become the be- is unstressed and unstressed syllables tend to lose “character” simply because speakers put less effort into them.

Over time, also the meaning of be- has gradually moved away from its stressed sibling and became more and more opaque. But the original sense is still in there somewhere. And in become and bekommen we can actually kind of see it because with some mind yoga, we can think of both of them as “to come by“.
I mean, not literally of course, but to come by also has this idea of attaining and it can go “both ways”.
If you become 30 , you kind of sort of “come by” 30.
And if you bekommen an email, you kind of sort of “come by” an email.
Again, not literally :).
But I hope you can see how the ideas of coming to a place, becoming something and receiving something all share the theme of “attaining” something – be it an object, a state or a location.

If not, don’t worry about it. These things need to click intuitively, and sometimes our brain is just like “Nah… I don’t feel like it today.”
After all, you don’t need to know any of this to use bekommen properly. It’s fascinating, but it’s not helpful.
Wait… should I say that? That sounds so negative… anyway, you know what I mean :).

So yeah, that’s it for today.
This was our little look at bekommen and become and why they are the false friends that they are.
If you want to check out how to use the German word for to become check out my article on werden below.
And of course, if you have any questions about any of this, just leave me a comment.
I hope you liked it, have a great week and see you next time.