A quick look at "aufhalten" and what holding a door has to do with staying somewhere. 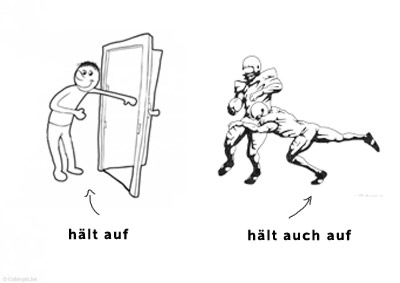 and welcome to another episode of our series on German Prefix Verbs. This time we’ll have a look at the meaning of

Halten is of course related to holding and haltingand the core idea of the family is something like keeping from moving/changing.
The prefix auf can add two ideas to a verb and in the case of aufhalten, we’re dealing with both of them.

The first idea that aufcarries is open, and aufhalten literally means “to hold open”.

And these are actually the only two uses for the verb: holding doors open and the figure of speech die Hand aufhalten which despite being a begging gesture actually means to expect or demand a high sum of cash.
For any other context where you could use the idea of holding or keeping open, you’d use offen halten.

So this first aufhalten really isn’t something to get held up with.
Hey, did I just say “held up”? What a good script.. uh… I mean coincidence. Because that brings us right to the second meaning of aufhalten – the idea of holding up.

Holding up is about the idea of keeping from moving ahead. It’s a bit obscure what exactly the up does but German can help clear that up. Because the second idea of auf, which is also its main idea, is the idea of “on top” and with a little bit of mind bending we can think of aufhalten as to hold on top of a certain position.
Now, even though they are essentially siblings, in practice aufhaltenand to hold up are only “meh” translations for each other. Sure, in some instances it works.

But aufhalten can be much more definite and is often used in the sense of to stopas in stopping someone or something.

And aufhalten is usually used with a direct object, so you’re usually “aufhaltening”someone.

I mean… English is not my native language so I might be wrong here but I feel like to hold up just doesn’t sound idiomatic in these examples and more often than not, it isn’t a good translation for aufhalten. Oh and while we’re at it… aufhalten totally isn’t a translation for “Hoooold up”. That would be “Warte mal” or “Mooooment mal.”

Cool.
Now let’s get to the third use of aufhalten, or sich aufhalten to be precise. Literally, it means to hold oneself up but over time it has lost all the negative tone and changed into a word for simply to stay, to be, in a sense of temporary location.

It’s not something you’d use in daily conversation if you just want to say where you are. You’d just say

Sich aufhalten is more common in writing but what makes it REALLY useful is the noun der Aufenthalt.

Der Aufenthalt means the stayand it is part of a LOT of really useful compounds like Aufenthaltserlaubnis (residence permit) , Aufenthaltsraum (break room, hang out room), der Auslandsaufenthalt (stay abroad) or the cute little Aufenthaltswahrscheinlichkeitsdichte which means something like “cuddle bear” and which is one of the most common words in kindergarten.
Okay, kidding… it comes from quantum physics and it has something to do with the probability of a particle at a certain point in space. I can’t really explain it. And while we’re at things I can’t explain… I have no clue why it is der Aufenthalt and not just der Aufhalt.
But there is something that I do know the answer to, so let’s move on to that.

If you’ve read a few episodes of this series on German prefix verbs you might be wondering “Wait, why draufhalten and not raufhalten?”. Well, this is another good example for the difference between r-versions and dr-versions. R-versions usually carry some notion of directed movement. Dr-versions on the other hand are often stationary. Let’s take auf.
We’ve learned that auf can express on top-ness. Rauf- covers the directed aspect of that – the idea of change from “not being on top” to “being on top” or in a more general sense upward.
Draufon the other hand can also express the idea of being on top.
Now, these are not super strict distinctions, and especially spoken colloquial blurs the lines completely, but generally, this difference is a good guideline. And it helps understand why for raufhalten you only get about 4,000 hits on Google while for draufhalten you can find 100,000. The reason is that halten is inherently stationary. Like… it’s essence is about PREVENTING movement. So that’s why the stationary dr-version feels MUCH more natural than the r-version with its “directed-ness” would.

Cool.
And what does draufhalten mean? Well, it’s used for the idea of directly aiming (and shooting) at something and today it’s commonly used for photo, video and sports. It’s hard to explain so let’s just look at the examples.

But this is really not all that useful so … passive pile :).
And I think that’s it for today. This was our look at aufhaltenand the two uses you’ll really need are to stopand to stay. As always, if you have any questions or suggestions or if you want to try out some examples just leave me a comment.
I hope you liked it and see you next time.

meanings:
– hold open (mostly for doors, also for hands)
– to stop someone from doing something
– to get caught up with, to slow down oneself with (sich aufhalten)
– to be/stay at a place (sich aufhalten)