A fun look at the word der Druck and the difference between the verbs drucken and drücken. Featuring also: a big let down. 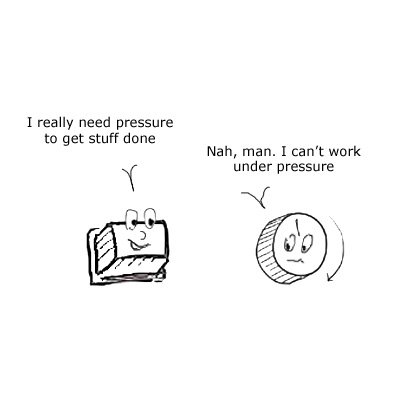 and welcome to our German Word of the Day. This time we’ll have a look at the meaning and the family of

And Druck is one of those German words that really “sound the part” because it means pressure. I mean, pressure has a descriptive sound, too. Like steam hissing out from a valve. But Druck… that really sounds like the feeling of being under literal pressure. Ugh. Like when you wake up lying under your king size matress because you confused it for the blanket.
Oh well, what happens in Vegas stays in Vegas.
Anyway, so Druck means pressure, there are loads of useful words to discover, so I’d say let’s waste no time and jump right in with some examples…

And here a few examples for compounds…

As you can see, in compounds the translation is not always pressure, but the idea of applied pressure is always pretty clear, I think.
Now, if we had to invent a verb for the noun der Druck we’d of course write it as drucken, we’d give it the core idea of applying pressure and boom… we’d have a nice self explanatory translation for to press, to push and to pressure.
Well… German had the same idea, but then it decided to add a little twist.

It does have the verb drucken, but it’s the German word for to print.
I mean… that makes sense, as well. Printing originally meant pressing down a plate with ink onto a paper and the words press and print and pressure all come from the Latin verb premere which was about putting pressure.
But the verb for the general idea of applying pressure ended up being drücken while drucken, which looks closer to the noun is only about printing.
So what happened? Well, a few hundred years ago, there was only one verb. In the southern half of Germany, they pronounced it drucken, in the more northern parts they said drücken. But it always expressed the full scope of applying pressure. It’s actually related to to threat, by the way, so it has its origins in the psychological version of pressure.
Anyway, in the 15th century Johannes Gutenberg invented the printing press with movable type and he happened to do this in the southern half of Germany. The folks in the northern parts were like
“Sweet. Let’s take drucken as a new verb just for to print. We’ll have a bigger vocabulary than those losers in the South.” And the folks in the south then were like
“We can’t have those losers in the North have a more diversified vocabulary than we do.” And so they imported the norther drücken as the general word for applying pressure.
And that’s why we have two verbs in German now. Drucken means to print and drücken means to press, to push and other ideas of applying pressure. With druck- it’s for a book – that’s a mnemonic you could use.

And this distinction also applies for the numerous prefix verbs. And many of them are really useful, so what we’ll do now is go through the prefixes and see if and how the meanings change or shif.. oh…. there’s a call coming in, Adore from the Philippines, welcome to the show.
“Hi, Emanuel… I have a suggestion.”
Sure, go ahead.
“Instead of going prefix by prefix, could we maybe first do a section on drucken and then one on drücken? I feel like having to constantly switch might be confusing.”
Oh… well… why not, actually. Yeah, that does make sense, now that I think about it. Thanks a lot for the idea.
“No problem. And thanks a lot.”
Cool. So I guess we’ll start with the prefix versions of drucken.

And even though it sounds very …uh…un-prefix-version-ish, all the prefix versions of drucken do refer to printing. The most important one of them is definitely ausdrucken, which is used in context of printing from a computer. It’s “in” the computer and you print it out.
Technically, drucken itself also works, and the printer is called Drucker and not Ausdrucker, but drucken somehow sounds more “industrial”. Like, books and flyers and newspapers. Or T-Shirts.
In the office context, ausdrucken is definitely the word to go.

Besides that, there’s bedrucken, which is a somewhat technical term for the action of printing something onto something… a photo on a T-shirt or cup for instance. Oh and I guess we can mention aufdrucken auf, which has a very similar idea. But you’ll usually see the noun der Aufdruck, rather than the verb.

And then, there’s abdrucken, which is once again to print. Yeay :).
But this one is not about the technical side but rather about the act of putting something out there by printing it in a newspaper or magazine.

And of course we also need to mention the noun der Abdruck here, which is the German word for the print in the sense of traces, like a footprint or fingerprint.

This abdrucken doesn’t really have much to do with printing in the more narrow sense, though, and I don’t really know whether it comes from abdrücken or abdrucken. That’s something I forgot to mention but that might be slightly confusing – the nouns for the verbs are always with just “u” no matter whether they’re based on drucken or drücken.
Yup, double meanings inbound! Do you copy, Maverick?!
Loud and clear, Stinger, let’s give them a good look.
That… that was Top Gun, by the way.
A famous movie from the 80s and the film and the reason that inspired me to start this German learning blog.
Actually… I … uh… I think I have to watch it, like, right now. Is that okay with everyone, if we finish early today and do the rest next time?
“Oh, that’s why you wanted to do drucken first. You’ve been wanting to split the show right from the start, Emanuel. Shame on you!!”
What?! NO! That wasn’t even my idea… seriously though… there are a lot more prefix versions for drücken than there are for drucken. Many of them are REALLY useful and going over them now would be a little too much for a day. I mean, with the quizz and all, I think you’re good for the day.
And I GOTTA watch Top Gun.
So this was it for today. This was our look at the origin and meaning of der Druck and the reason why drucken means to print.
As usual, you can check how much you remember, and also learn some more compounds in the little quiz I have prepared for you.
And of course, if you have any questions or suggestions just leave me a comment.
I hope you liked it and see you next time!

der Ausdruck – the (computer) print
ausdrucken – the print out