The meaning (and use) of “weder… noch”

A quick look at how to use "weder... noch" ("neither ... nor") in German. And a look at the other translations for "neither". With lots of examples. 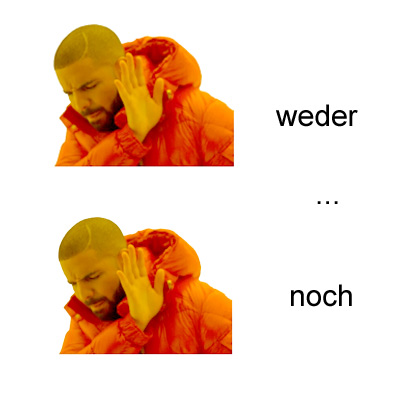 and welcome to our German Word of the Day Tag Team Special.
This time we will have a look at the meaning and grammar of a really important combination. Say hello to:

Suppose you have a bad day and you are grumpy as hell. People might offer you things to make you feel better and yet this is just making you even grumpier. If you know what I mean, then you will find lots of joy with weder… noch… . They’re every true nay-sayer’s dream and  they will make your rejections sound much more definite.

Even without translation, you might have guessed it  from context… weder… noch is the German version of  neither… nor. So it’s the perfect answer to entweder … oder… (either … or)  – well, if you don’t like either of the alternatives.  And as far as structure goes, weder noch works pretty much the same as neither nor. So we can use it to negate two nouns like here:

But it also works for negating two full sentences, like here:

And if you look closely at the last example, you will actually see something REALLY strange. Both languages are using the same sentence structure here. And actually, it’s the GERMAN version. Like… in German, the verb always comes in position two, no matter whether we’ve already had the subject or not. English is different in that you usually put the subject before the verb.

But not in case of neither… nor. Instead of saying this:

​So it puts the verb second (or add the helper “do” there).
And in German, both weder and noch count as position 1 and the verb comes after.
That’s actually different to entweder … oder, where it’s up to us.

Cool.
So now we know what the combination weder noch means and that it’s pretty much the same as neither nor.  That doesn’t apply to the words by themselves, though.
Noch is actually super common by itself and quite the range of uses. I’ve got an entire article about it and it’s really really really long. I’ll leave a link below if you want to see something really long and hard… ahem…
Weder kind of makes up for noch’s complexity because by itself it means… nothing.
“Wait, so it doesn’t actually mean neither?”
Exactly. You will only see weder in the combination with noch. And the big question now is how to translate neither.

How to translate “neither”

Shut up, headline. I just said said that.

So, the English neither as a standalone can be boiled down to two concepts.
The first one is about “joining a negation”. The best example is “me neither‘” which is basically “Me also not“.  And that’s exactly how it is said in German. We say auch nicht.

And while we’re at it… this is also how German says “not either”. Which expresses the same stuff basically.

Cool.
The other idea of  neither is a negation of two (or more) things in one go. An example is ‘neither of us’ and in German, this neither is translated to keiner. Or keine. Or keines. Or keinem. Or keinen. Or keiner… oh wait, we already had that. So yeah… we have to go through the motions of gender and case with these endings…

And that’s pretty much it. Well, actually, let’s look at a few more examples for weder … noch. Just as a recall.

I guess we should also mention that weder noch can be used as a standalone answer. Like here:

Oh and should you ever feel the need to reject more than two things simply add nochs to your sentence:

And that’s all for today. Hooray.
This was our look at the meaning and use of weder noch. If you want to check how much you remember and if you’ve understood everything, you can take the little quiz we have prepared. Well, you will be able to take it once I’ve finished it. It is Friday, the 17th of January 2020, Emanuel is sitting at his desk working. Grinding the Germ… oh wait, it’s actually finished :).
And of course, if you have any questions about weder noch, just leave me a comment and I’ll do my best to clear things up.
Hope you liked it and see you next time.