A thorough look at the German word 'von'. We'll find its core idea, learn which locations to use it for, and go over the most common verbs with 'von'. And gifs. 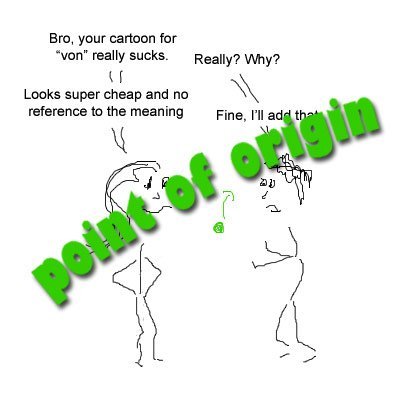 As usual in this series, we’ll  look at the word from all perspectives. So we’ll talk about von as a preposition, but we’ll also compile the most common verbs that “want” von as a preposition and see if there’s some underlying theme. And of course we’ll talk about the verbs that have von as a prefix.
And in fact, let’s start with those right away because…. there aren’t any. There’s no vonmachen or vongehen or vonsehen.
All the other prepositions were always like
“Come one, bro. You should prefix some time. It’s super lit.”
but von was always
“Nah, I don’t wanna. I’d rather go surfing.”
And do you know which car von is using to get to the beach?
A van.
…
Yup, looks like the jokes are as flat as the sea today.
Perfect for a swim, so let’s jump right in …

“von” as a preposition

According to the last official count from December, German has about one trillion prepositions. Von is among the most important ones because it is one of the two main prepositions that express the idea of origin.
The other one is aus, and while aus generally carries a notion of exiting, von is used for origins that do NOT involve some sort of exiting – either because it’s not possible or it’s just not the focus.
Sounds a bit abstract, so let’s go over the most important contexts together.

The first big one is people as point of origin – be it in a sense of actual location or just the person as source.

And the third example already kind of shows the next context: possession. That’s actually super close to the idea of origin. Why? well, because an owner is the “potential” point of origin.

That’s a REALLY crazy story, by the way. If we have time left at the end I’ll tell you a little about it.
Anyway, besides people, von is also used if the point of origin is a store, if you refer to it by its name.
Yes, stores are usually locations that you can enter and exit, but if you use the brand name, then it’s kind of personified and aus sounds pretty weird (unless you add an article, then it’s okay again).

And the last example leads us right over to the other really important context: causes.
Which, if you think about it, is also a point of origin. The origin of my belly is McDonalds. I mean, the belly of this fictional first person character, not mine. I rarely go to belly and I don’t have a McDona… I mean, I don’t have a bell… oh gee, whatever… examples.

Thou shalt not translate prepositions for it leads to confusion.

This ancient saying is very wise. It is one of the most common traps for beginners that they pick one translation for a preposition and then keep running into phrasings and situations where it doesn’t work. That is the usage of prepositions, especially in combination with verbs is largely dependent on what ended up being the most idiomatic choice. And just because something is idiomatic in German, doesn’t mean it’s idiomatic in English and vice versa.
So instead of being fixated on one or a couple of translations, it’s better to know the core idea the preposition conveys (stuff like toward, away, above… ) and then see if we can find a system behind the usage.
So instead of saying

von is for points of origin that are not about exiting: people, brand names, causes

Hey… I said “better”, not easier or comfier.
But trust me… start thinking of prepositions in terms of concepts rather than translations. That’ll lead to much less frustration.
That said, von and from do line up pretty well for locations. Except for one context: geographical names.
If the context is that you travel from A to B, then von is fine, but if you’re talking about origin, then you need to use aus.

Cool.
So that was von as a preposition. Now let’s talk about everyone’s favorite topic: verb-preposition combos.

“OMG, Emanuel just used an animated .gif. We are so…”

Top 15 best “von” combinations with verbs (and why you should)

Hmmm…  I did what it said in the BuzzFeed-Headlines Online Course but this one sounded a bit weird….
Anyways, if you’re not sure what I mean with these combinations – it’s those verbs that you need to combine with a specific preposition to form a proper sentence. Pretty much every language that has prepositions will have these combinations and a great example in English would be to depend, where the full phrasing is actually to depend on.
You can’t just say

It needs to be on.  But there’s no deeper reason why it is not at or from. It just happened to be on, and in a different language it might be something that usually doesn’t translate to on, which is why we need to learn them by heart, pretty much. *ugh… I know.

Cool, so now that we all know what those combinations are, let’s look at the most common German verbs that go with von.
And we’re already kind of talking about one of the most important ones. because to depend on in German is  abhängen von.
So in German you literally say “to hang from”. And that actually ties in quite well with the idea of a point of origin, that we found in the beginning.

We’ve talked about abhängen von in a separate article, by the way, in case you need more examples or you’re wondering about the difference to ankommen auf. I’ll give you the link below.
But now let’s go right to the next von-combo,  überzeugen von,  which means to convince of.

Does that tie in with the basic idea for von? I think yes. Just think of the phrasing “I know where you’re coming from.” The matter we’re trying to convince someone of, is basically our point of origin.
And in fact, this notion of a figurative point of origin can  whole group of  vor combos. Well, the only group of von-combos to be exact :). Here they are:


What they all share is that they involve some sort of thought about a subject. The thought can be expressed and voiced, thought silently, or it can even be subconscious. Either way, there’s a subject (matter) as a source, a point of origin for a thought process. Not super obvious, but also not the craziest mind yoga German has to offer :).
Anyway, example time:

Now, you might be wondering about the colors. Well, the blue ones are fixed. That means you need to use von or it will not work.
The green ones on the other hand are NOT fixed. That means von is just one possible preposition to make it work. The other common one for those verbs is über and the difference is quite subtle, to be honest. To me, von sounds a little tiny bit more distant than über.  Like… von makes me think of some sort of pipeline of information while über is more like being in a balloon hovering above the subject. That’s the best I can put it.
Yeah… I know… German teacher, level 100.
Seriously though, I think über is more common and it’s also closer to about, so maybe just remember that one, but please don’t worry about this difference too much, because native speakers will not notice this effort.

Cool.
Now, we’re almost done for the day, but there are a couple more verbs with von I want to mention.
The first one is haben von. Technically, it is about having something from somewhere, but it’s also used in two common phrasings that are all too common in our ego-oriented, capitalist world… *sheds tear, posts picture in Instagram to show vulnerability and appear authentic

And last but not least, we have the phrasing sich erholen von which is just what you need after a long, straining session of learning German… exactly: to recover. And yup, you need both, the preposition AND a self reference :).
I think, sich erholen von sounds a bit less serious than to recover, so you can use it for just an hour of relaxation after a long hike. But it also works for serious life threatening diseases.

Hang in there, Thomas. You will pull through!
And that’s it for today.
This was our look at the German preposition von and it was quite quick actually.
Yeaaaaay!
Von is definitely one of the easier prepositions to grasp because the core idea of point of origin is pretty damn consistent and more or less visible in all the uses. And of course the fact that there are no prefix versions makes it much easier.
As always, if you .. what?… oh, the story about Thomas’s shirt and moon dust. Oh we don’t have time left. We’ll just do that next time. Sooooo sorry.
But yeah, if you have any questions about any of this or if you have some other verb-von-combination that you want to add, just leave me a comment.  I hope you we  liked it and see you next time.

My  wonderful assistant has prepared a little quiz for you. 10 questions to check if you remember everything :).
Let her know, how you liked it in the comments. She’s really curious for feedback :)
Viel Spaß!