A detailed look at the German preposition "durch". We'll see what it means, when to use it and we'll collect the most important prefix verbs with "durch" 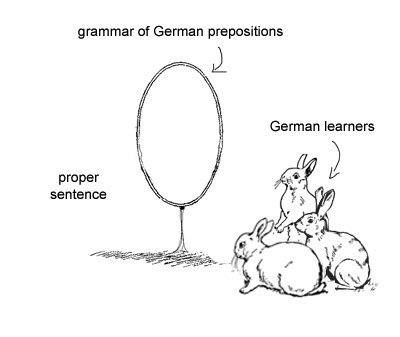 and welcome back to our series German Prepositions Explained, the series where we look at the German prepositions one at a time. Usually, these episodes are pretty intense because of prepositions with their use as a prefix and those pesky prefix verb combos. But not today. Today will be fun and easy. Because today, we’ll talk about the meaning and use of

It’s one of the easiest and most straightforward ones, but it’s still worth a look. So let’s jump right in

Durch is the German counterpart of through, and the two are actually related, as we can see if we squint hard enough, figuratively speaking… durch … dhurch…. dhourch … thourgh… through… meh… kind of, at least.
The origin is the ancient-ish Indo-European root *ter(ə) which carried the idea of “crossing over some boundary”. This is also where the Latin syllable tra(ns) comes from and the original sense is pretty much still visible, even in words where you wouldn’t expect it at first glance. Transport for example is “porting(carrying) across”, tradition is “giving, passing on to the next generation” and trance which comes from “trans+ire” literally meant “to go across”.
Anyway, let’s transition right back to the Germanic branch of the family tree. And both, durch and its English brother through, focused on traversing in the sense of location

This isn’t the only use of the prepo… what? … oh… what case, you mean… oh, it’s accusative. Durch goes with the accusative. Sorry, I almost forgot to mention it.
But yeah… besides this pretty factual location idea, there’s also the broad sense of “cause” or “by means of”

This use fits in with the other one quite well. Also here, we have some sort of journey, something “traverses” to us, if that makes sense.
Anyway, this sense of a cause is also the main idea of the da-word dadurch, which can mean by means ofthat and, when combined with dass, it can also be a translation for because.

Oh and then there’s also the wo-word wodurch, which is basically questioning for the cause of something.

And that’s pretty much all there is to know about durch the preposition.
So let’s now turn toward durch as a prefix.

durch as a prefix

And durchis probably the easiest prefix of all of them, because the core idea always durchscheint.
Get it? Get it… it shines through :).

As you can see, there’s a certain “degree of freedom” to the meaning.
And some verbs even have two meanings. Durchmachen for example. In combination with words like vielor etwas, it can express the idea of going through a lot of hardship. And by itself (or with die Nacht) it means that we stay up all night.

Or durchfallen, where the verb is about “falling” through an exam while the noun der Durchfall is about food falling through your body…

But I think you can see the idea of traversing/through in all of them.
In fact, the only ones I could think of that might be a little obscure are durchhalten, durchsetzen and durchdrehen.

Durchhaltenis basically the opposite of giving up, which makes sense if we think of it as holding position throughout a challenge.

The next one, durchdrehen literally means to turn through. And one of its uses is for a wheel that doesn’t “grip” where it should. Like… think of a car wheel on ice.
And this image is actually quite helpful with colloquial meaning of durchdrehen… which is to go crazy, to flip out.

And then last but not least, we have durchsetzen, and the more common sich durchsetzen. It makes us think of sitting and setting. But what it’s actually about is pushing through your agenda and sich durchsetzen, is the German word for to prevail, to come out on top.
Think of it maybe as getting your “settings” into reality, if you need a connection.

And that’s pretty much all about the prefix verbs.
Well… I guess, it would be more complete to also mention the few instances where durch- is actually a non separable prefix, like durchleben for instance. But I think there’s a bigger lesson to be learned here… the lesson that we don’t always have to have everything. It’s not fulfilling. And one skill about learning a language is to just live with loose ends. Learn to sit in peace with this nagging voice in your head that wants all the answers. So let’s just sit for a second and say to yourself
“Yeah… sometimes, some very few times, durch- is a non-separable prefix. I don’t know when or why. And that’s okay.”
And watch your curiosity go away.
#wholesome
Seriously though… instead of wasting head space with boring, rarely used verbs, I want to mention a couple of durch-words that I really want to mention because they’re just so common.

First up, we have zwischendurch, which expresses the idea of in between things in a temporal sense, with a casual undertone.

It’s kind of hard to translate but it’s pretty common in German. We’ve talked about it in more detail in the article on “zwischen”, though, so I’ll give you the link below, if you want to know more.

The other word if wanted to mention is durcheinander. Taken literally, it’s something like “through one another” and the idea it expresses is chaos, disorder. Like… the entity is all mixed up. It can be a translation for confusedbut it is about general confusion, not just confusion between two things. Think of a swarm of bees, if you need a visual image.

This word is pretty useful because it’s not only used as a stand-alone but also as a prefix. You know… because who says that a prefix has to be short :).

And last but not least, as a sort of honorable mention, let’s give a quick shout out to the noun der Durchschnitt and the adjective durchschnittlich. The verb they come from, durchschneiden, simply means to cut through, but der Durchschnittis the German word for … average.
And if you think of the symbol Ø , this makes perfect sense… a circle cut through in the center.

And that’s it for today.
I know some of you might be wondering what happened to the part about these pesky preposition-verb-combos that cause so many problem. But for durch, these aren’t really a thing. Like… there aren’t really obscure, random combos. The idea of through is always pretty clear.
So yeah… we’re really done for the day.
This was our look at the German preposition durch and the main takeaways are: it means through, in a traversing sense as well in the sense of by means of, dadurchis always about the latter, and the prefix verbs are no problem.
As usual, you can test yourself and learn a few more cool words, just try out the little quiz we have prepared for you. And of course, if you have any questions or suggestions or you want to bring up some other cool durch-words (and there are plenty), just leave me a comment.
I hope you liked it and see you next time.

Word of the Day – “zwischen”

durch = through (for locations); also in broad sense of “cause” or “by means of”;
durch den Kopf gehen lassen = to think about something
durch die Blume sagen = to say something in a roundabout way, lit. to say something “through the flower”
dadurch = by means of, through that;
dadurch, dass = because
durchlassen = to let through
durchlesen = to read (completely)
durchkommen = to get through
durchgehen = to go through/over
durchmachen = to stay up all night, also to go through a lot of hardship;
durchfallen = to fail an exam
der Durchfall = diarrhea
durchhalten = to hang in there/not give up, (the opposite of giving up)
durchdrehen = to turn through; to go crazy, to flip out;
sich durchsetzen = to prevail, to come out on top; to push through;
zwischendurch = in between things in a temporal sense, with a casual undertone
durcheinander = confused; mixed up/ in a mess;
durcheinanderreden = to talk at the same time/over each other
durcheinandertrinken = to mix all kinds of alcohol
durchschneiden = to cut through
der Durchschnitt = average
durchschnittlich = average
im Durchschnitt = on average