Word of the Day – “drücken”

In this episode, we'll go over the important prefix verbs of "drücken" and see a surprising parallel in English. 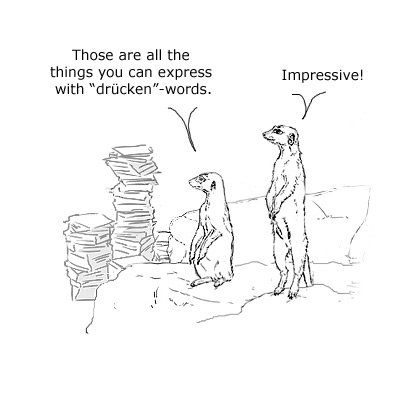 and welcome our German Word of the Day. And this time, we’ll take a thorough look at the meaning of

Actually, this is kind of the second part of our look at “der Druck“.
In the first part, we talked about the core idea of the family and then focused on the verb drucken and its prefix versions.
If you haven’t read it, you can find it here:

Word of the Day – der Druck

Today, we’ll go over the prefix versions of drücken, because there are quite a few that are absolute must haves. I mean… no pressure. But you really NEED those.
So are you ready to jump in?
Perfect….

As we’ve learned in part one, drückenis about the idea of applying pressure.

As you can see, the translations vary depending on context, but the notion of pressure is always visible.
That is not really the case for the various prefix versions. But if you’re silently sighing and preparing for some intense mind bending, then I have good news for you. Because the drücken-prefix-squat has a direct counterpart in English (and other languages for that matter) making it a nice example for how other languages have prefix verb families without it being such a big deal.
And this counterpart is … drumroll… the verb to press.
Let’s take a look.

Going by the two ideas of aus, ausdrücken should mean something like pushing something off or out. And you can find it in that factual sense, occasionally.

But the real idea ausdrücken is getting your ideas and personality into the world. Or in one word: to express. Which is actually the literal translation of ausdrücken, just with a Latin twist.

This sense is also the core of adjectives like ausdrucksvoll or ausdrucksstark, which both expressive, and ausdrücklich which means explicitely. And of course there’s noun der Ausdruck, which means expression, and which is also the German word for a curse word.

And now, after seeing the parallel of ausdrücken and express, can you guess the meaning of unterdrücken?

Literally, unterdrückenis “to press under”. If we Latinize that, we get to suppress. And that’s EXACTLY the meaning of unterdrücken. Well, and oppress, but that’s the same core idea.

Just in case you missed it, let’s mention explicitely that unterdrücken is NOT a separable verb, so unter always sticks to drücken, no matter what.

And I guess we could also mention the r-version of unterdrücken. If you don’t know what an r-version is, then let me ask you back why you haven’t read my article on it. Seriously, why not?! It’s such an important concept!
“Well, Emanuel, you actually don’t have an article about that.”
Oh… haha… right. How embarassing. My apologies then.
So yeah, the r-version is a term that I came up with. Many prefix verbs have a version with an “r” in front of them. A lot of teachers and books will go on auto-pilot and say that these are just shortened versions of “her”, but that’s ignoring the reality of German today. I don’t want to go into that discussion now, though. If you’re interested, you can just check out my article on the r-versi…
“EMANUEL, YOU DON’T HAVE AN ARTICLE ABOUT R-VERSION!!!”
Gee, okay okay, I forgot for a second, I’m sorry.
So yeah, these r-versions almost always carry the most literal meaning you can construct from prefix and verb. And that’s the same here because runterdrücken literally means to press, push down.

Hell yeah, I’ll visualize that from now on! *muscle-growth-intensifies.
Or was it *nonsense-intensifies?
That’s for a physicist to answer.
Meanwhile, let’s move on to the next prefix … ein.

Based on what we’ve seen so far, eindrücken should mean to impress. But nope. Instead of being consistent and straight forward, German here went with the be-version a long time ago and the translation to impress is beeindrucken. German, any specific reason for that choice?
“Of course. My goal was to subvert the learner’s expectations and thus creating a momentary void in whi… .”
Oh, okay whatever. Never mind. At least the noun is kind of consistent because impression is der Eindruck.

And eindrücken? Does that have a meaning? Well, yes, it can be used in a physical sense of indent. That’s pretty rare though. More common is the r-version reindrücken which expresses the idea of literally pushing something in somewhere.

Cool.
So these three, ausdrücken, unterdrücken and beeindrucken were the most useful prefix versions and they’re all must haves.
But they’re not the only ones, so let’s go over the others real quick.

First up, we have bedrücken, which carries the same idea as to depress. Someone gets pushed down mentally. Bedrücken is not very common, though and for these everyday uses of depress traurig (sad) or something with deprimieren are more idiomatic.

Bedrücken is something you’ll find in books, but I wanted to mention it, because we have the whole press-thing again.
Anyway, next up, we have erdrücken and this is a classic case for er- carrying the idea of “to death”. Because erdrücken means to squeeze to death.

And very similar to that, we have zerdrücken, which is to crush, but not with a focus on death but on the idea of into pieces.

Then, we have abdrückenand this one is actually a bit weird because it translates to to pull. Most of you are now probably like “Wait, I thought pull is ziehen.”. And you’re absolutely right about that. Abdrücken is only to pull in the context of firearms because it actually means to pull the trigger.I mean, sure, why not. The finger does “push” onto the trigger. But what’s really weird is that the trigger itself is called der Abzug. Which comes from the verb abziehen. Any specific reason for that, German?
“Of course. I’m using this dialectical approach as a metaphor for the larger, overarching que…”
Okay, whatever, no one actually cares. Here’s an example…

And last but not least, we have verdrücken, which can be used to express the very important idea of accidentally pressing a wrong button…

And I think that’s it for today. This was our look at the meaning of drückenand its various prefix versions, Yup, it was kind of a run through toward the end and there are a few more prefix versions out there, but I think you can guess them from context. In fact, you get to see two of them in the little quiz I have prepared.
But yeah, if you have any questions or suggestions, just leave me a comment. I hope you liked it and see you next time.
And oh… I forgot to include it in the article on der Druck so I’m gonna add it here – one of my favorite proverbs in German and very useful if you have a paper to finish or a deadline to keep.

This entry was posted in B-Level, Must have words. Bookmark the permalink.
Subscribe
57 Comments
Oldest
Newest
Inline Feedbacks
View all comments