Big news, I have actually read out the episode so you can listen to it. This is an experiment and I am not sure, if this actually works or if it is helpful. Also, I am not a trainer reader and English is not my native language so you can listen to me trying to fight off my German accent :D.
But yeah… I’ve ben wanting to try this for a long time and this theory-heavy episode felt like a good fit.
So if you want to give it a try, you can download/listen to the mp3 here.

(near the end I say “ancestors of Indo-European”… I mean, “offsprinsg”) 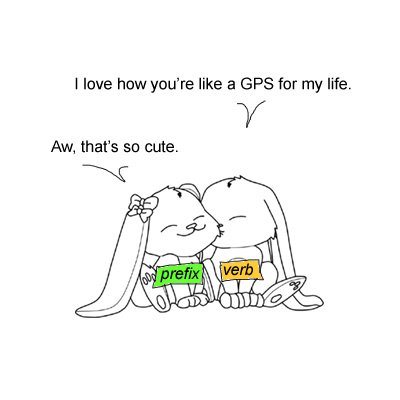 and welcome to … well… I don’t really know what to call this… topic of the Day, I guess.
It’s not about one word in particular, nor is it about a grammar rule. Rather, I want to talk a bit about one quite general and essential aspect of language:

Verb prefixes are a very prominent part of the German language and many learners find them very confusing. Understandably so. There’s the verb kommen and then there are dozens of variations like auskommen, einkommen, reinkommen or bekommen and their meanings are really all over the place and random.
But verb prefixes are not a German thing. Many languages have them and English is no exception. In fact, English is just as full of prefix verbs as German. They’re just a little more covert because… but we’ll get to that later.

So …today, I want to talk a bit about verb prefixes in general and explore where they come from and if there’s actually a common function that they all share.
That’s not gonna make us masters of German prefix verbs. But it’s like with pictures… having a bit of background puts the foreground in perspective. Wow, that was kind of deep for one beer.
So yeah, if you like theorizing a bit about languages, then follow me. And if you don’t like it, follow me anyway, because it will help you make peace with prefix verbs.

We begin our discussion on a very general level.
There are very different kinds of languages around the world but linguists have found some very general characteristics. One of those characteristics is the approach of adding something to a word to express something. The English “-ed”-ending is a good example for that.

I learned this in school.

The -ed expresses that we’re talking in the past tense. Seems super familiar to many of us, because most languages do something like that. But technically, you could also do it this way:

I learn this in school #past.

In linguistics, this second approach is called isolating (use of isolated words for all concepts) while adding an ending is termed synthetic.
In reality, almost no language is “purely” one or the other. Most use a mix of both approaches but Indo-European, the ancestor of most European languages as well as of Hindi and Persian, was a BIG BIG fan of adding stuff and altering words.
Take a look at the verb conjugation and noun inflection of ancient Greek. They got some serious tables in ancient Greek. Looking at tables for German adjective endings will be like looking at the math homework of a second grader after seeing a Linear Algebra textbook – it’s still very very difficult but you know there’s much worse.
Anyway, in the first example we had the ending -ed carrying the information that the sentence is in the past tense. Crucial information, but it’s actually a rather light load. Because in almost all European languages, the endings are heavily charged and carry lots of information like person, number, tense, mode and sometimes a thing called aspect; or a mix of those.
It’s not really our topic today, but let me give you a quick example anyway, with the Italian verb cucinare which means to cook.

The first word means “I will cook.”, the second one means “You would cook.”. So the ending here is benching information about which person is doing it, the tense AND whether it’s an actual event or just an unreal option. That’s quite crazy, if you think about it.
In comparison to Italian and even more so to Latin, English has evolved much more toward the isolating approach. But that’s not the end all be all.
In fact, there’s a theory that a language evolves in a circlular fashion. So from synthetic it slowly drifts toward isolating because of mumbling and doing away with endings. Then, it uses multi word phrases to express itself, which then over time get mumbled again until they’re like an ending. Of course that’s pretty simplified, but just take the term “gonna”. This is the result of mumbling “going to” but if you don’t know that, it looks like a special form of to go – to go with an ending.

Anyway, so yeah, most of us do have a notion of what verb endings do. But the end is only one of two “slots” where we could add something. The other one is the beginning.
And already thousands of years ago, the Indo-Europeans would add little syllables in front of their verbs: prefixes.
And the big question is what do those do? What information do they carry? Is there a common theme?
Well… there is.

What do prefixes do

And once again, we’ll take a little detour to linguistics.
One really important way of categorizing verbs, or actions I should say, is by looking at its “type of action” – which in English linguistics is actually called aktionsart, I think.
An action can have a defined endpoint, then it’s called telic. Or it doesn’t have a fixed endpoint, then it’s called atelic.
And just to make sure… this is usually NOT a quality of the verb itself but of the verb as it is used in a context. Here’s an example.

The first sentence includes a defined endpoint, the second one doesn’t. If you don’t “feel” like there’s a difference, just try adding a time span to the sentences in form of “for X amount of time”. That’ll make it pretty obvious.

It works in the second sentence because we can read a book for five minutes as well as for three hours. There’s no defined endpoint. But it doesn’t work in the first example because there we do have a defined end – the finishing of the book.
Now, you don’t really have to remember the terms telic and atelic.
What matters is that you have seen that there’s a the difference between actions that have an inherent goal or endpoint and actions that don’t.
Because the grand theme of prefixes, the core function they kind of share across all European languages is this:

Prefixes lend a sense of goal/direction to a verb.

Now, this is a VERY general statement, so please don’t take it too literally. It’s not a direction in “3D space”. It doesn’t mean that verbs can’t have a defined end without a prefix and it doesn’t mean that every prefix verb automatically has a fixed endgoal.
But prefixes do add some notion of direction or goal to verbs that might not have been there before. And as I said, that theme is true for virtually all offsprings of good old Indo-European; so most languages of Europe.
Bold claim. But we’ll see that it’s actually true… next week, when we go through examples together.

Yeah, I know, bohoooo. You want to know now. And I admit, I kind of got you hyped up in the intro.
And I wasn’t gonna split this into two parts initially.
But truth is that I’m way to impatient :).
This is actually gonna be part of the book on prefix verbs that I am working on and I really want to take my time to write it “properly”. But now I’m kind of excited about this part, because after literally years I finally feel like my writer’s block with regards to this book is gone and I’m just super mega curious for your feedback on this so far. And I am also super mega curious what you think about the audio. Like… is my reading okay and can you actually follow the material by listening to it.

And also, I think it’s actually kind of fun, if you do your own little enquiry first. Think about German prefixes and see if you can find this notion of a goal or direction in them. And take a look at your own language. Do you have prefixes and what do they do?
Let me know all your thoughts in the comments and let’s see what insights we can gain :).
And of course if you have any questions or suggestions, just leave me a comment.
I hope you liked it, have a great week and see you next time.

Oh, if you’re wondering about why there’s no quiz today… that’s because I couldn’t think of more than two questions. And I didn’t want to ask about the linguistic bits and terms. Those are interesting, but they don’t really matter all that much so I don’t want to give them too much attention by asking questions about them :).