"either or" is "entweder oder" in German. Here's a quick look at how to use it. 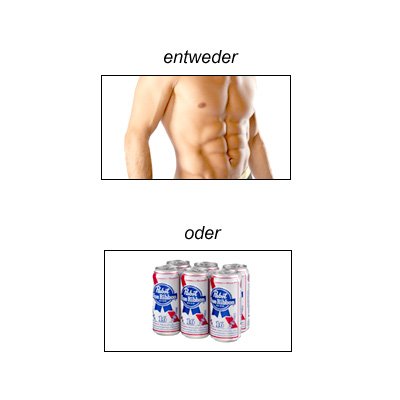 Hello everyone,
and welcome to our German Word of the Day. And this time, it’s tag team action. Ohhh yeah, double trouble in da house, ya’ll.
Because today, we’ll look at the meaning of

And these two are what you need whenever you have to express an exclusive “or” in language.
Or in simpler terms that we can actually understand: entweder… oder is the German version of either… or.

The two are overall pretty similar, but there are a few small cutsy-wootsy differences with regards word order.
Don’t worry, they’re really just small differences.
But let’s first look at some “regular” examples.

Just like in English, the parts entwederand oder are put right before the options A and B.
Still, the sentence might look different than in English.

The reason here is simply that in German, the second part of the verb goes to the end. That’s not a weird quirk, by the way. It’s actually a pretty fundamental feature that we can find in various aspects of the language. But that’s too much for today. If you’re intrested in that, I recommend my series on word order and my series on the position of nicht.
They’re pretty eye-opening. Like… seriously… you’ll be like “Bruh?! What’d I just read?”

Anyway, there is one little quirk that entwederhas that doesn’t matter in English and that comes into play when the two options that we connect are two fully fledged sentences.
Here’s an example:

And in these cases, entweder can actually be position zero, like oder. But it can also be position one, with the verb coming right after it.

And just in case you’re wondering why I’m starting to count at zero in one version and at “1” in the other… the reference point is the verb in German, not the start of the sentence. The verb is position “2” no matter what. The element right before it is position 1. And if there’s another element before that, that’s position zero.
Actually, only a few words can be put into position zero, aberand oderamong them. So entwederis actually pretty special, because oder, for instance can NOT be moved like that.

But anyway, in the example above, the first one sounds more idiomatic to me here, because the two parts are somewhat lengthy, but for shorter parts it’s the other way around.

It’s really up to you, to be honest, so maybe it’s easier to have it be position zero because that’s closer to English.
Cool.
Now, we’re almost done, but there is one big fat potential trap door.
Since entweder… odermeans either.. or , and oderby itself means or, it’s natural to file entweder as either.
But entweder is ONLY used in the combination entweder… oder; never by itself.
A standalone either is NOT gonna be entweder, and that would actually be really confusing.

In phrasings like “I don’t either” it is expressed as auch nicht. Which literally means ‘as well not’.

And in the sense of both or either one, the most common translation is beide(s/n/m/…). Though in some contexts you might see another option.

And that’s it for today :).
This was our look at how to say either or in German.
As usual, if you have any questions or suggestions, just leave me a comment.
I hope you enjoyed it and see you next time.

neither… nor in German