In this lecture, we'll learn the ONE basic rule that we need for the position of "nicht". And we'll learn a crazy way of thinking that makes this rule possible. 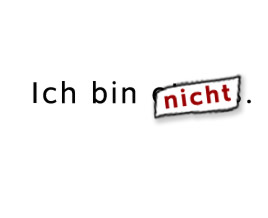 it’s been a while since we’ve had a real grammar episode but the wait is over. Welcome to a new episode of the German is Easy – Learn German Online Course. And this time we’ll have a look at the perfect topic for a hot summer day:

the position of “nicht”
The question where to put nicht in a sentence is one that confuses many learners. And it is one that textbooks have the perfect, spot-on answer to…
nooooot! Stupid textbooks.
Okay, to be fair… the stuff about sentence negation vs element negation, is not all wrong, but it gets really confusing once you look closer. Because just like with sentence structure, the standard material kind of fails to look under the hood. It explains symptoms, not the cause.
So we’ll try a slightly different approach, one that captures the underlying mechanics just as well as this picture does.
Haha. Get it? Underlying mechanics?
Seriously though, our approach is gonna be AWESOME because all we need is one rule and get this – the rule has no exceptions. WOW!!
Oh, beside that rule we also need very open mind. And a coffee because it’ll be intense.
In part one we’ll get to know the basic rule and we’ll lay a fair bit of groundwork. And before you go like “Dude, I’m a working man, mother of 4 and full time student… I ain’t got time for groundwork.” let me tell you… you will want to read this. You need this groundwork like Burger King needs ground beef.
So, are you ready to dive in? Perfect!

For the average learner, the main sentence structure is the normal structure and the side sentences are just a (per)version of it.
Well, get ready for an idea that is crazy but also great.

What if I told you that the side sentence structure is actually the true structure of a German sentence. You’re probably like “Please god, noooo!!” And I know that sounds grisly but bear with me please.
If you really want to get a handle on word order, you have to look at side sentences. Word order is much stricter in side sentence and it is there that the underlying structure of German really shows.
Instead of thinking of the main sentence as the normal one, we should think of it as a side sentence with two extra slots in the beginning and these slots get filled with stuff you take out of its normal position.
One of the slots, the second one, gets filled with part of the verb, the other is kind of a wild card slot and can take pretty much any one element. Let’s do an example.

I don’t want to dive into word order too much so just take my word for it… this is the normal order of these elements and you cannot switch for example heute and ich without creating so much tension that the result sounds almost wrong.
Now lets make that into a main sentence. We’ll remove the dass because it’s just a connector and add the two extra slots

And now lets fill the extra slots. Extra 2 gets the verb from the end, extra 1 can take any one thing pretty much.

In a way, all the different main sentence version are just a result of us taking out different elements out of their “natural” position and putting them in the first slot and it’s much easier to analyze the side sentence because there are no “out of line” slots.
Cool.
Now, when it comes to the position of nicht, there’s one slot in particular that matters… the verb slot.
Most people think, that the standard position for the verb is the second one. With our way of looking at it here, the verb slot is actually at the very end and in main sentences we’re taking out something from that slot and put it into position 2.
And this way of looking at things is the key to the fundamental rule nicht.

The one basic rule

In standard lore, they make a distinction between two kinds of nicht-negations. One is called element negation and it’s done by putting nicht in front of the element you want to negate, the other one is called sentence negation, where the sentence as a whole gets negated. And for sentence negation, nicht comes at the end… or at least as late as possible.

But making this distinction between two kinds of nicht-negations with two sets of rules for the position sucks. It makes things more complicated than they are and does NOT reflect the inner workings of the language.
The only, an absolute rule for the position of nicht is this:

“Nicht” precedes what it negates.

And that’s it.
But what about the sentences with the nicht at the end?

Isn’t this an exception?? Like… nicht doesn’t precede anything here, right? But this is where our groundwork comes into play. Because nicht actually ISN’T at the end. It is in front of the verb slot. Only that the verb slot is empty because we took out the content and moved it into the extra slot.

Once we put the sentence into side sentence mode we can see it.

Booom, nicht is NOT at the end anymore because under the hood it never was. It just happened to be the last word.

This is super wrong. Nicht ALWAYS precedes what it negate so it can NEVER come at the end of a side sentence.

And that’s not all. We now also have a perfectly logical reason why nicht doesn’t come after prefixes or ge-forms or other verbs. Because those sit in the final verb slot.

And it’s not only helpful with that. You see, if nicht precedes what it negates that also implies that anything coming before nicht is NOT negated. And that can help for instance understand the difference between the following two

Both are correct but only one is the proper translation for “I don’t like swimming”. Any idea which one? It’s the first one. And when we put them in side sentence mode, it becomes obvious.

The word that expresses the liking is gern, and in the second version gern comes before nicht so it is NOT negated. The second sentence actually means

So our one basic rule can already clear up quite a bit. And by the way.. it totally holds for the kein-negations, too. Because kein is nothing other than a contraction of a negation particle and ein.

So this our basic rule. But as awesome as it is, it’s not enough to help with the whole scope of the position of nicht and all the various “What the hell” moments there are. Just to give you two examples…

Tricky stuff right? I mean… whyyyyyy. For these things we need to use our brains.
To really understand the positioning of nicht and when to put it where, we now need to work with that rule using an open mind and common sense. Yeah, I know… some sort of “If-A-put-nicht-here,-if-B-put-it-there” -thing would be easier but it would also be kinda boring. Just like this famous chocolate.
What? Yes , I did spend some time on Photoshop just for this dumb joke. Oh well, the things I do for laugh.

So, to properly place nicht, we need to get an understanding of what I call a default negation.

In German but also in other languages there are more than one way to add a negative to a sentence. What I call neutral negation is the version that does not have a special focus. I guess you could call it “sentence negation” but I’d rather not… I find the term really confusing.
Anyway, here’s an example

The first one is a neutral negation. There’s no special focus on anything. In the second one on the other hand, the negation specifically targets “his”. That’s what’s being negated, implying that Thomas might have read someone else’s. Probably Maria’s. I mean… it’s her own fault. She could just change her passw… but I digress.
So to really master negation in a language you need to get a feel for what the neutral negation is and how to create special focus.
English, at least in spoken, keeps one structure and relies on aural emphasis for the focusing.
In German it’s a little more complex.
German, too, uses aural emphasis, but also the position of nicht, can create special focus. Can, not must.
In longer sentences, several positions can sound neutral depending how you say it. And which positions are how neutral doesn’t only depend on the sentence… it actually friggin’ depends on the context in which the sentence is said, on the intention of the speaker

Number 1 is not neutral at all and has a clear focus on Thomas, for 2 and 3 it depends on how it’s said and the context of conversation whether it’s a focused negation or not, number 4 is pretty neutral but it implies that Thomas did something with Maria and number 5 is … pretty much wrong.

God daaaaamn…. now you’re probably like “How am I supposed to learn that.” But it’s not as bad as it seems. All we need is common sense, and the idea of scenery.
By scenery I basically mean the setting, the “world” about which we learn something in the sentence that has the negation. And because that’s super abstract, let’s do an example.

Using aural emphasis… well… bold font… we’ve focused the negation specifically on the verb to study here. The other elements (“I”, “at the library”) are NOT touched by the negation. And those elements are the “scenery“. Me at the library, that’s the scenery we learn something about and what we learn is that studying is NOT what I do there.
So, anything that is not touched by the negation is the scenery. And in part two we’ll see the power of this scenery stuff because it’ll help us clear up everything.
Now you’re like “Wait… in part 2? So we have to wait a week?”
Well, actually no… you’ll have to wait more than a week :).
Yeah… I know you hate me right now. But seriously, I want part 2 to be good and make sense so I’m not gonna rush it. And I think we’ve a lot to digest already.
Let me know in the comments if the stuff made sense so far or if you have any questions. Do you think it’s any good? Also, what are your experiences with the “standard” book explanation. Does that work for you? And let me know if there are any things in particular that you don’t understand about the position of nicht so we can talk about it in part 2.

I’m out for now… I wish you a wonderful week, I hope you enjoyed it and see you next time.

If you liked the stuff about side sentence and you want to find out WHY that kind of is the natural structure, then check out part one of my post on word order:

☾
🗨Comment
⬤Record Yourself
x
Train Your Pronunciation (beta)
?
Here, you can record yourself and compare it to the examples.You can NOT save the recording as of now. You can download it BUT:
it's a .wav-format which is VERY HUGE. So I'd say, don't do it.
Make sure to hit "stop" before closing or your browser will crash at some point :)
wpDiscuz