The official name for this form is past participle or in German Partizip 2 (Partizip II). But those are based on Latin and they’re not really intuitive. So I decided to use the name “ge-form” on this site, because even though not all verbs get a “ge-“, it is a key feature of this form.

The ge-form is one of the most important things because not only do we need it to talk about the past – we also need it for passive voice and we can use it as an adjective or even a noun.
It’s one of the first grammar things I look up when checking out a new language and the earlier you get used to it, the better.

**Here are the posts in which I have talked about this concept in detail.**
German Past Tense - The Two Types of Past

A fun overview over how the past tense works in German and where the differences are to English.

All about the perfect in German, also called spoken past - when to use it, how to form the past participle, aka ge-form and when to use "sein" and "haben". 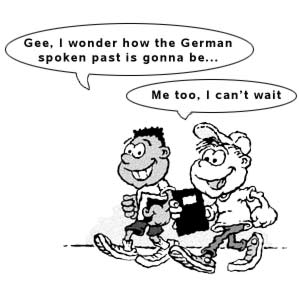 Your thoughts and impressions