A fun look at the meaning of "der Drang", the difference to "der Zwang" and the cool related words like "dringend" that we can find in the family. 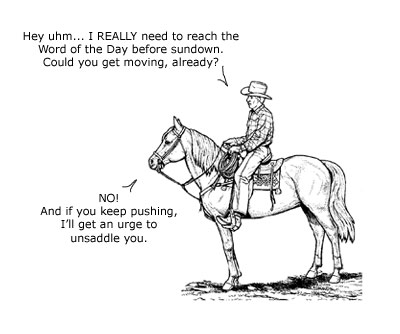 And we won’t only look at Drang of course but also at other cool words like dringendor drängeln.
Okay, drängelnisn’t that cool actually. But sometimes you have to do it. Like… when you have to get out of a packed train. Or when the article you’re reading to learn German randomly starts talking about a horse that just stands on a meadow. And it describes how the horse just stands there. And then it eats a bit of grass. And takes a few steps. And then stands there. And you’re like
“Dude, could we get started already?!”
That’s drängeln. So let’s jump right in.

Drang sounds quite similar to another German word: der Zwang. And in fact, the similarity is not only in sound. Zwang (we’ve talked about it in a separate article) translates to compulsion, coercion and it’s is essentially a force that is making you do something and you absolutely can’t resist it.
A Drang is kind of a softer, more “intuitive” version of that. It doesn’t sound as irresistible as Zwang and while Zwang can come from the outside, a Drangis always born within you.
The best translations are probably urge and desire but I’d say Drang is on the upper end if the intensity range of those.
Let’s look at a few examples

The origin of the word is a super mega turbo ancient Indo-European root that was about thrusting, compressing.
It’s not entirely sure, but the word truncate might be part of that family and there might be a connection to the word Druck. And regardless of whether that’s actually the case or not, the idea of pressure and thrusting work really great as a core idea for not only the noun but also the verbs. Which brings us right to drängenand drängeln.

The noun der Drang was only about pressure coming from the inside. The verb drängenon the other hand works for outside pressuring. Someone “pressures, shoves” in a certain direction.

But drängen itself isn’t actually all that common and it’s nothing you’d need in your active vocabulary. The same goes for the prefix versions aufdrängen, which means to “push something on someone”, and bedrängen which is a more physical pushing into someone’s space.

The only word that’s quite common is verdrängen. It’s based in the away-ver and even though it works for quite the range of contexts, the basic idea of “pressuring away” is pretty visible.

As you can see, this is a pretty useful word and the same goes for drängeln.
These l-versions of verbs often carry a subtle notion of repetition. Drängen is pretty stream lined pressure in one direction. Drängeln is more of an on and off, hard soft, left right kind of thing. And if you’re now like “Huh?” just imagine you’re trying to walk through a dense crowd. Like or a concert or on very busy market. You have your destination and you push a little left, a little right, a little forward, gently, firmly…. THAT is the essence drängeln.
It’s also used on a more abstract sense of trying to make someone hurry, and let’s not forget about the prefix version vordrängeln, which is the German word for jumping the queue/line. Like… you don’t go to the end but somewhere in the middle instead.

Cool.
So verdrängen and drängeln are definitely words worth adding to your active vocab, but there’s actually still more.

Just like drängen, dringen itself is not all that useful. It’s kind of similar to drängenin that it’s also about pushing in a certain direction but it’s more about you yourself moving there. And unlike drängen you cannot do it to someone directly… blah blah blah… it’s REALLY boring actually. Just like the example…

I know, some of you really like learning rare words and using them in everyday situations. I do likewise on occasion. But trust me… dringen is TOO rare and specific for that and it will not work.

So why are we even mentioning it? Because it has two related words that are SUUUUUPER useful.
The first one is dringend which is the German word for urgently. Something that’s urgent is kind of shoving, pressing itself into your immediate reality, if that makes sense.

And the other really useful word is the prefix verb eindringen, which is about something or someone forcing their way inside somewhere. It works for a range of contexts and the translations vary but the basic idea is always pretty clear.

Oh, and I guess we could also mention aufdringlich. We already had aufdrängen earlier and aufdringlich is kind of the adjective for that and means intrusive, pushy.

And that’s it for today.
Yeah!! This was our look at the family of Drang. There are a few words and uses that we didn’t cover but I think with the basic idea of pushing, pressing in mind, you’ll be able to get at least the gist of them from context.
As always, if you have any questions or suggestions or if you have a Drangto try out some examples, just hop into the comment section. But please no drängeln :). There’s enough room for all of you.
I’m out for now, I hope you had a fun time and learned something.
Have a great week and I’ll see you next time.

Oh, I almost forgot a little

I don’t know how many but I’m sure quite a few of you are using some sort of flashcard system and you copy the vocab by hand. So decided to make it a little easier for all of you by offering the vocab as a .csv-file. It’s basically a textfile that you can import with most common flashcard apps. (Brainscape, Memrise, Anki, Tiny Cards,… ).
Let me know if you find this helpful, either in a comment, or by this poll!

If enough of you use it, I’ll add it to all the articles here :).
I’m also planning a little app, so you can train right here, but that’s gonna take some time.

Get this weeks vocab as .csv

IMPORTANT!! The separator sign here is a semi colon: “;”. NOT a comma. I hope this works for you. Let me know if this works, or if I should restructure to a comma.

Word of the Day – “zwingen”

der Drang – the urge, desire, compulsion
der Tatendrang – the zest, energy to do something

jemanden drängen zu – push someone to do something (rare!!)
jemanden bedrängen – ( physically ) pushing into someone’s personal space
jemandem etwas aufdrängen – push something onto someone (figuratively)

drängeln – shove and push (in crowds), also: nag someone to hurry
vordrängeln – skip the line/queue